The Gophers lost and tied against Michigan State on the road last year. 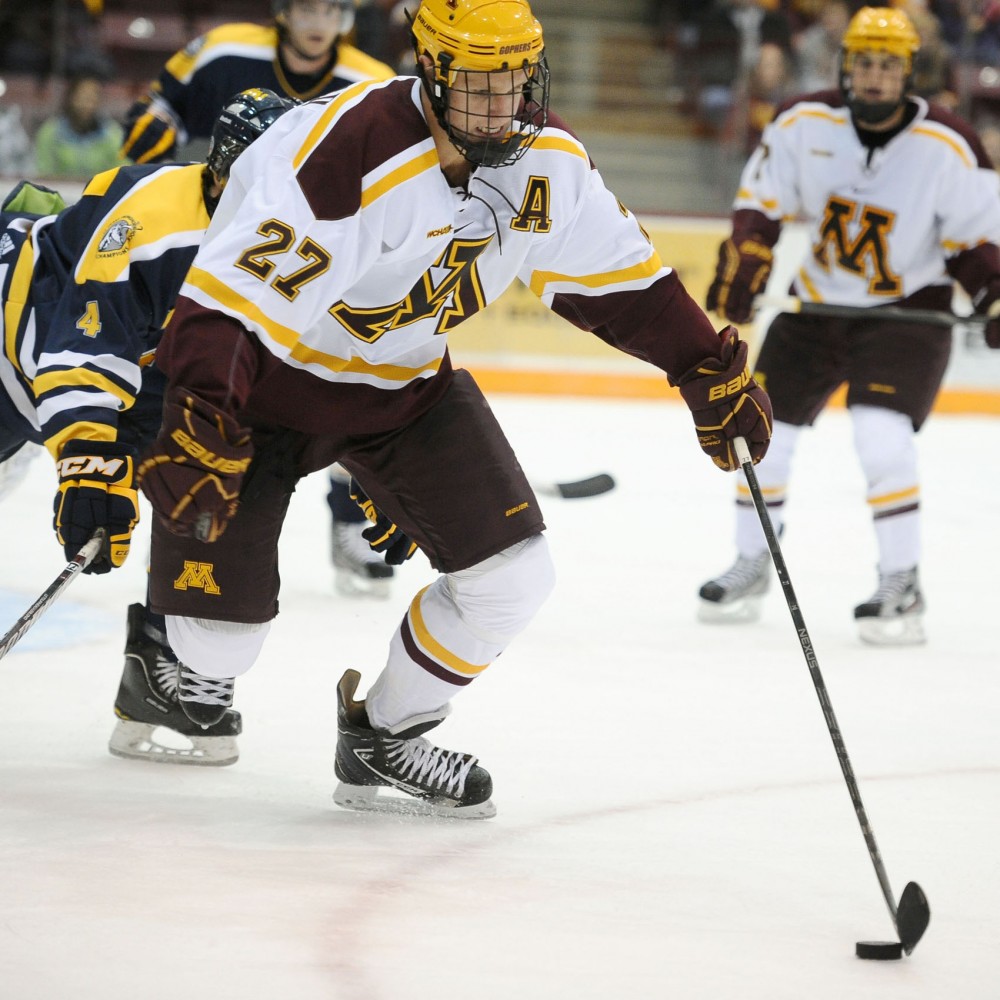 The Gophers have started their last couple of seasons with teams that could be called cupcakes. But this season, few would compare Michigan State to a pastry.

Minnesota and Michigan State will meet this Friday and Saturday at Mariucci Arena. The No. 16 Spartans are a formidable team, and they gave the Gophers trouble last year. Minnesota traveled to Michigan State, where it lost one game and tied in another.

“There’s a little bad blood to be there,” junior defenseman Nate Schmidt said. “Whether it’s a Big Ten matchup or not, we went into their barn last year and only came out with one point after being up in I think both games.”

Schmidt said he’s a fan of playing high-profile games right off the bat.

The No. 2 Gophers have a few question marks entering the season, and that was apparent during their 7-0 exhibition win last Saturday. Both Michael Shibrowski and Adam Wilcox saw time in net during the game. Head coach Don Lucia said the same could be expected this weekend.

“I think if you’d asked me today, more than likely we’d probably split the first three weekends and then head into November and see where we’re at,” Lucia said this week. “I think it’s important to see your goaltenders at home. It’s important to see how they react on the road, and then if they both play well, they’ll continue to play.”

Shibrowski, who saw 20 minutes in net last season, said he was happy to be spending time in net.

“We’ve got a great group in front of me, so that always makes it a little bit better,” the junior goaltender said. “[The defensemen] take care of any extra garbage that’s [lying] around — they keep everything to the outside.”

“When we looked at our team this year, we felt the top four forwards were Rau, Bjugstad, Haula and Budish,” Lucia said. “If we can do it, it would be nice to have two on two different lines rather than three on one.”

Christian Isackson, Nate Condon and Sam Warning are all possibilities to join those four players on the first two lines, although Lucia said he liked the way Condon and Travis Boyd were working together on the third line.

“If we can spread the guys out a little bit with three lines, we can go into a game and really not worry which line’s out against who,” Lucia said.

Though only one team in the top 15 played a real game last week, the Gophers now sit alone atop the USA Today/USA Hockey poll. Minnesota was tied with Boston College in the preseason poll.

What does that mean to Lucia? Not much.

“I think they should start taking polls after Thanksgiving when people have had a chance to actually play a game,” Lucia said. “It’s like anything else —some teams are going to get rated higher than they should and others lower than they should because you really don’t know.”