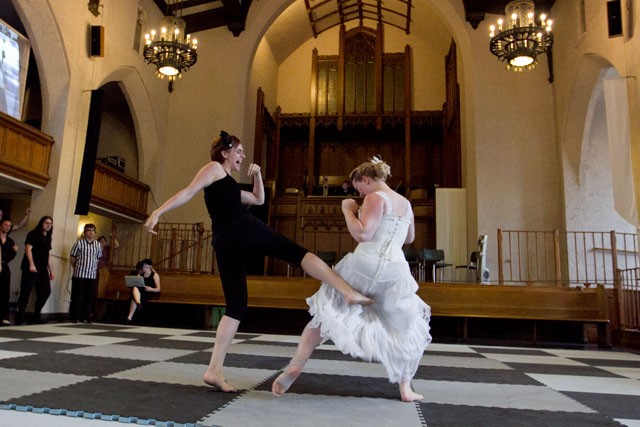 Swords held at the ready, two chess pieces circled each other, staring each other down with victory-hungry glares.

With the blink of an eye, a high-speed duel began, swords clanging and tempers rising.

The company thrice performed the fervent chess game this weekend at the University Baptist Church in Dinkytown. On Friday, a lively audience cheered and booed over the course of the match.

Apart from providing entertainment to the community, the companyâÄôs goal is to raise enough money to balance its budget and take steps to becoming a nonprofit organization. Tickets range between $5 and $20.

Mike Lubke, one of the companyâÄôs founders and the showâÄôs coordinator, directed Human Combat Chess for his senior project as a University of Minnesota theater major in 2009. Taking the experience he gained from his project, Lubke revamped the show and presented the newest version as more of a sporting event than a âÄúfight club,âÄù as he described the original work in 2009.

By modifying the show, Lubke said he combined his personal loves into one package, merging stage combat, theater and the sporting atmosphere.

âÄúI wanted to have my cake and eat it too,âÄù he said.

The church, across University Avenue Southeast from Sanford and Roy Wilkins residence halls, was transformed from a sanctuary to a rowdy sporting arena.

Organizers covered the floor with a life-sized black-and-white chess board and each of the actors stood on the board as a chess piece. Lubke was the black king and announced his teamâÄôs moves.

Each time a piece moved to an already occupied square, the teams hollered and catcalled each other, knowing a battle was about to begin. The two pieces choose to fight unarmed or with one of eight different weapons like swords and staffs. The entire chess board would clear for the two pieces to battle over the spot.

A referee âÄî the only participant that actually looked sporty, with a classic black-and-white striped jersey âÄî ensured no one made illegal moves and called the winner at the end of the fight.

Territorial fights ended when one opponent âÄúyieldedâÄù because of losing a weapon or getting injured.

The gameâÄôs end came when one team defeated the other.

Each battle drew hoots and hollers that echoed throughout the church, as audience members shouted, âÄúGet him!âÄù and âÄúIn your face!âÄù When a piece came out victorious, the building erupted with noise.

Lubke wanted the audience involved rather than having them seated and quiet.

âÄúI wanted people to cheer for us when we succeeded,âÄù he said, âÄúand grimace when we got injured.âÄù

The members of Six Elements Theatre have been paying out of pocket to put on their past shows, but when they didnâÄôt break even off the first couple productions, their pockets remained empty.

After the first weekend of the Human Combat Chess shows, Lubke said the company was on its way to a balanced budget.

Even though the fights are choreographed, each person needs to know his or her part in the show, said Willson Borchert, a chess piece on the white team.

âÄúItâÄôs a game of trust,âÄù he said. If one person messes up, it could be dangerous for the other person.

While the fight sequences are fake, the weapons are real.

As they learned the fights, some actors got a little scuffed up. Robert Korsmo, who acted as a white knight, had cuts and bruises on his arms from trying to perfect a move.

The actors came from different levels of experience.

David Schneider, the white king, is an experienced stage combatant and has an extensive acting background. He was one of four people in charge of overseeing the fights.

On the other hand, Aaron Souer has experience in foam fighting âÄî a sport with foam-padded weapons âÄî but had never acted in a show before.

âÄúThe idea [of Human Combat Chess] is brilliant,âÄù he said. âÄúAnyone who loves chess and fighting âÄî come on in.âÄù