Momentum grinds to a halt, at home and on road

The men’s team had its 7-match win streak broken; the women lost twice. 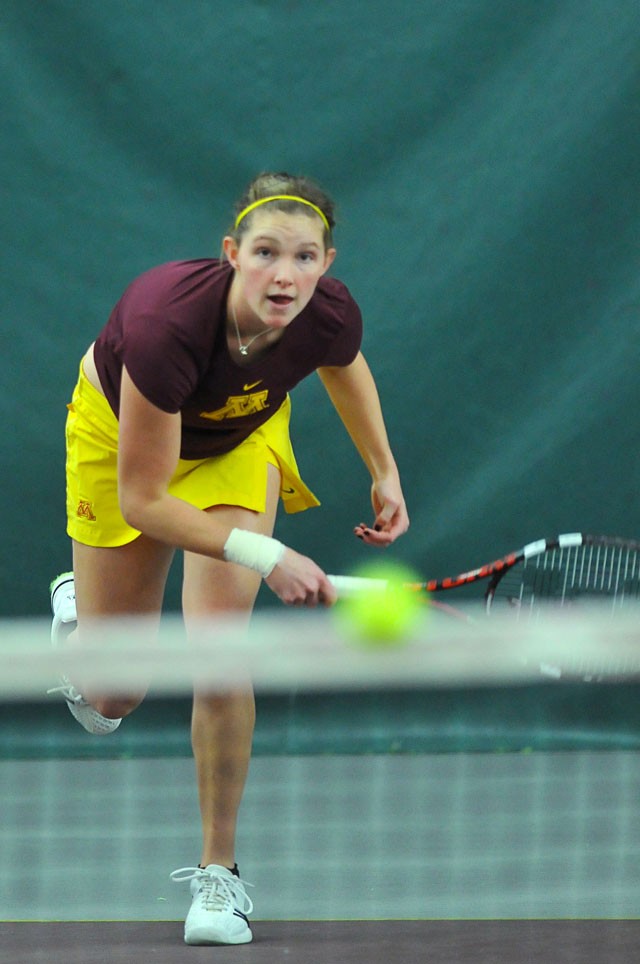 All good things must come to an end.

In this case, it was the No. 16 Gophers menâÄôs tennis teamâÄôs win streak.

Minnesota extended its streak to seven with a win Friday over St. MaryâÄôs University, only to have it ended a day later by No. 23 Washington.

This is just the GophersâÄô second loss of the season and first since Jan. 28.

Washington jumped out to an early lead, claiming the doubles point by winning all three doubles matches. The HuskiesâÄô top two doubles pairings both rank in the ITA top 60, and it showed as the No. 38 pairing of Kyle McMorrow and Jeevan Nedunchezhiyan took down junior Julian Dehn and sophomore Rok Bonin 8-3, while the No. 52 pairing of Martin Kildahl and Tobi Obenaus defeated senior Sebastian Gallego and sophomore Brendan Ruddock.

The Huskies proceeded to win each of the six singles matches, giving them the 7-0 victory.

Bonin was defeated in No. 1 singles 6-3, 6-1 by the 75th-ranked player. Senior Tobias Wernet dropped a three-set match in No. 2 singles and Dehn lost in three sets in No. 5 singles.

Minnesota will likely see its No. 16 ranking drop on the heels of the loss.

The Gophers womenâÄôs tennis team dropped consecutive matches against rival Wisconsin and No. 36 Nebraska, finishing its six-game homestand with a 2-4 record.

Minnesota lost the doubles point and dropped five of six singles matches Friday night in a 6-1 loss to Wisconsin. Sophomore Doran Muravnik scored the only point for the Gophers with a three-set victory in No. 5 singles.

The Gophers went into SundayâÄôs match against Nebraska shorthanded, as freshmen Natallia Pintusava and Yuliana Umanets were inactive with injuries, and senior Alessandra Ferrazzi was serving a one-match suspension. They would go on to lose 7-0.

The Huskers swept the doubles matches and won every singles match in straight sets.

âÄúI couldnâÄôt be prouder [of the players who played on Sunday],âÄù head coach Tyler Thomson said. âÄúAll weâÄôre looking for is a consistent level of fight and heart, and we got that today. Once we establish consistency with the way we compete and the way we fight, when we get healthy weâÄôre going to be a great team.âÄù