Minnesota had two golfers place in the top 30 during the tournament. 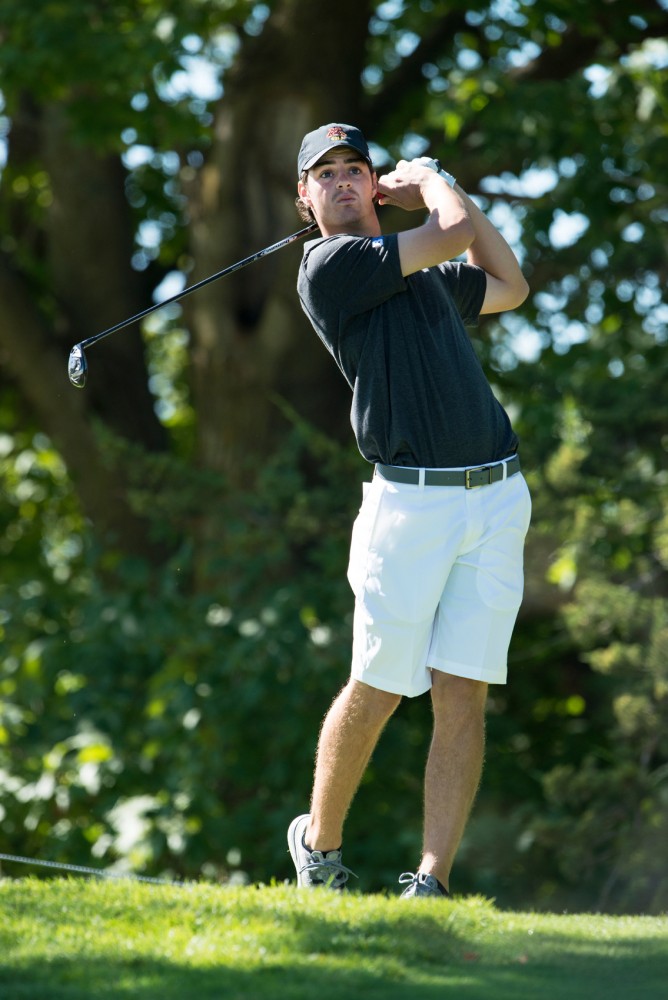 Junior Grady Meyer drives the ball at the Windsong Golf Club during the Gopher Invitational on Sunday morning.

Jack White
The men’s golf team finished in ninth place out of 16 teams and shot an 844 as a team at the Alister MacKenzie Invitational, which ended Tuesday.
“Yesterday we were very competitive. I thought both of our rounds were very consistent,” head coach John Carlson said. “Everyone on the team stepped up. Today we didn’t drive nearly as well. We didn’t put ourselves in the position to make as many birdies. The birdies were out there, but you had to be in play off the tee to make it happen.”
The team shot their worst score of the tournament, a 290, in the third round. The Gophers shot 277 in both of the previous rounds.
The ninth place finish marks the second year in a row the Gophers placed in the top 10 at the Alister MacKenzie Invite.
“It’s always nice coming back to a place we feel comfortable,” Carlson said. “As a coaching staff, we can help these guys out in the practice rounds. It’s a fun golf place to play because there’s so many birdies out there.”
The leader for the Gophers individually was junior Justin Doeden, who tied for 26th. Doeden shot a 209 in total, highlighted by a 65 in the first round, his lowest score so far at Minnesota.
“Justin played great the first round,” Carlson said. “65 is one of the lowest scores in the six years I’ve been coaching. That was fun to see.”
Doeden then shot a 70 in the second round and a 74 in the third.
“This is a process,”
Doeden said. “It’s all about getting better. Yesterday I put two really solid rounds together [and] felt like I got better as a golfer.”
Senior Jon DuToit shot a 210 individually, just one stroke shy of Doeden. He scored 71 in the first and third rounds of the tournament, while adding a 68 in the second. His score tied him for 30th place at the tournament.
Junior Grady Meyer scored a 70 in the first and third rounds, which matched his career low score for a single round. Meyer finished tied for 47th individually.
“I was hoping for a mid-60 round,” Meyer said. “[Scoring in the 70s] is my best job as a Gopher so far, I guess. I was hoping for a little lower of a score.”
Freshman Tom Vining had the worst score of any Minnesota golfer individually and came in last place at the tournament. Vining was the only player in the tournament to score higher than 79 in two different rounds.
“I’m pretty disappointed with [the finish],” Vining said. “[I] didn’t have much stuff this week, I guess. I’m not putting well. I think my whole game is pretty dead. Mentally I just got to get a little better. Not get too down on myself.”
Delete Image
Align Left
Align Center
Align Right
Align Left
Align Center
Delete Heading