Brandon Haugrud is a 24-year-old sophomore who served in Iraq. 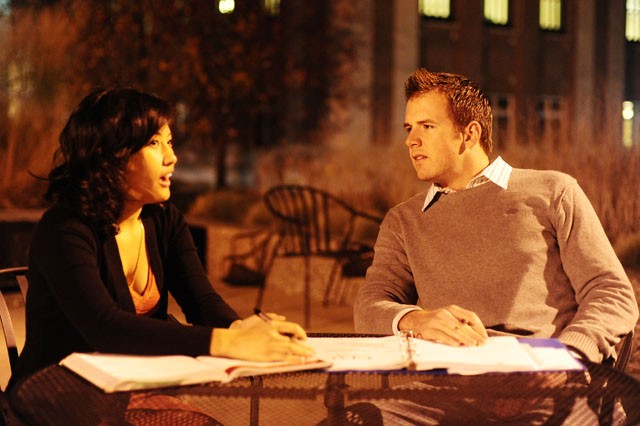 Veteran Brandon Haugrud (right) studies with Yer Lor, a fellow Student Ambassador, Tuesday night at the Northrup Plaza. Brandon joined the Student Ambassadors group as a means of meeting friends like Yer and to help transition back into student life after serving.

Leaving an Afghan combat zone in May and starting freshman year about three months later is not a traditional route to college, but itâÄôs the one Brandon Haugrud took to the University of Minnesota.
Haugrud, 24, is one of the 700 veterans currently enrolled at the University and demonstrates the diversity found within the veteran community on campus and how adjusting is different for everyone.
âÄúNo one has the exact same story,âÄù Carin Anderson, senior veterans coordinator with One Stop Student Services, said.
âÄúSome people come back and they really struggle getting back into school, because theyâÄôre used to being told what to do all the time,âÄù she said. âÄúWhereas other students come back and theyâÄôre free of what the norm is in the military âÄ¦ and they really flourish.âÄù
The central motivation for veterans to get their degree is simple: the economy.
In order to compete, veterans not seeking a lifelong career in the military must keep up with their civilian peers.
âÄúIf you wanted to get out,âÄù Haugrud said, âÄúthe atmosphere was that you need to use your education benefits, because youâÄôre stupid if youâÄôre not.âÄù
Embracing the challenge
But getting used to writing an eight-page anthropology paper or reading 50 pages on Russian literature often takes some adjustment.
âÄúI really embraced [the challenge],âÄù Haugrud said. âÄúI told myself, âÄòYou know, there are 18-year-old kids coming straight out of high school who are doing this. ThereâÄôs no reason I canâÄôt.âÄô IâÄôve overcome so many challenges, thereâÄôs nothing I canâÄôt do that my
peers can.âÄù
Haugrud, a political science sophomore, joined the U.S. Marines after graduating from high school in 2004. Over the next five years, he spent a total of 14 months in Iraq and eight months in Afghanistan.
He said he adjusted so well to the University from being involved in a myriad of student groups, including CLA Ambassadors and Habitat for Humanity.
Anderson said the key to helping veterans overcome obstacles is by gaining a fundamental understanding of each studentâÄôs perspective.
âÄúEvery veteran-student âÄ¦ has different experiences, theyâÄôve seen different things,âÄù she said.
âÄúMilitary degree in a civilian worldâÄù
Haugrud came to the University with no college credit, making him a first year in the class of 2013.
While this is common, many veterans have taken credits while serving, technically categorizing them as transfer students.
However, Anderson said the University is âÄúrather conservativeâÄù in accepting military credits, since a majority of them donâÄôt pertain to a liberal arts education.
âÄúSometimes itâÄôs really hard to put a military degree in a civilian world,âÄù she said. âÄúBut some of them are able to work with their colleges, and they get [physical education] credits for their military service.âÄù
Jennifer Arno, a counselor with the Minnesota Department of Veterans Affairs, helps veterans decide where to apply and said this turns many veterans off to the University.
âÄúThey are kind of gravitating toward programs that are going to look at their military experience because to get that job in the military, they had to go through lots of classes, lots of training [so] they want to get credit for that,âÄù Arno said.
Added stress
While post-traumatic stress disorder is not a rampant problem at the University, it certainly exists. The Office of Veteran Affairs offers
resources for numerous medical conditions.
An issue more pertinent to most is the GI Bill.
The most recent $78 billion GI Bill from the Department of Veteran Affairs seeks to improve educational opportunities for veterans and fully covers tuition at state colleges.
Benefits include stipends for books and room and board. Matching federal dollars are available for attending private colleges that also give veterans financial aid.
The American Council on Education found that the more than 300,000 veterans in the program are pleased with the benefits. Still, Anderson said the logistics of working with the VA can be frustrating.
âÄúRight now the VA is backed-up by a couple weeks, so a lot of our students are waiting on their tuition payments to come in, or theyâÄôre waiting for their living stipends to be sent to them and trying to budget accordingly âÄ¦ That creates a lot of stress,âÄù she said.