Remembering the women the world forgot 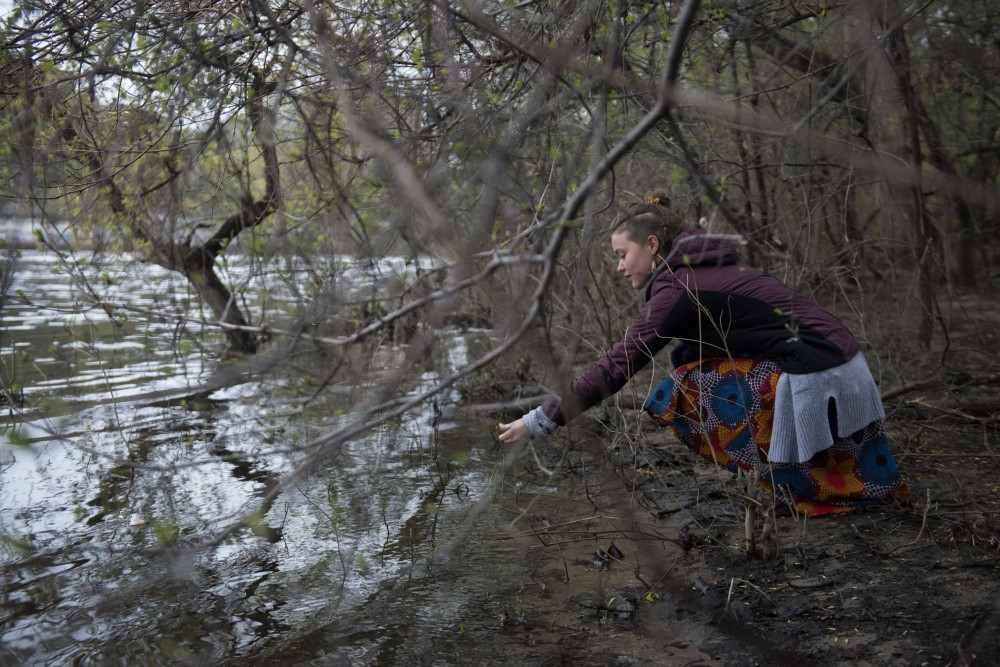 Nancy Swanson prepares to place a handful of tobacco in the Mississippi as part of a sunrise ceremony on Wednesday, May 1 to commemorate the beginning of American Indian Month. The ceremony concluded with a special tribute to missing and murdered indigenous women.

Walter Goodwin remembers the joy he felt when his cousin, Ricarda Tillman-Locket, was born. He also remembers the fear and anguish he felt upon hearing she disappeared.

It was 2007 in Memphis, Tennessee when Tillman-Locket dropped her 7-month-old off at a friend’s house before heading to work. From there, people can only speculate what happened to her.

Both Goodwin, an assistant director for student support within the University of Minnesota’s College of Liberal Arts, and his cousin are members of the Winnebago tribe. That day, Goodwin said he became part of a vast network of families across the United States and Canada: those who have been impacted by the epidemic of unsolved cases involving missing and murdered indigenous women.

“It has been more than a decade … the feeling of hopelessness never really goes away,” Goodwin said.

He is not alone. According to a report released last May by the Urban Indian Health Institute, there are more than 5,700 cases of missing and murdered indigenous women and girls in the U.S. Of those, only 116 are logged in the Department of Justice’s missing persons database.

Although approximately 1 percent of Minnesotans identify as Native American, many still feel the effects of these disappearances. Some Native American communities have been aware of unsolved murders and disappearances for centuries. However, recognition of this issue across the nation has only just recently come to light, and University members are becoming part of the conversation surrounding this hidden epidemic.

“It’s like an open wound that refuses to heal,” Goodwin said. “These unanswered, lingering questions … this is our reality.”

Generations of abuse factor into disappearances of Native women

Unsolved cases related to murdered and missing indigenous women are impacted by a number of factors Native American communities face.

Some counties across the nation comprising tribal lands have murder rates 10 times the national average, according to the DOJ.

“Its kind of been like ‘open season’ on Native women for about 500 years,” said Chris Stark, a woman of indigenous and European heritage who co-authored a 2011 report on sex trafficking of Native American women in the state of Minnesota.

Stark said the sex trafficking of indigenous women is a symptom of generational trauma. Starting with the mass murder of Native Americans during the time of colonization and westward expansion, abuse of Natives was then translated into resettling, taking land and establishing boarding schools, which forced assimilation on Native children, she said. It’s now an epidemic of missing and murdered women.

The fact that most reservations are jurisdictional voids is another factor that helps the epidemic grow, said Shane Plumer, a University alumnus who specializes in Native and tribal law.

Reservations, which act as sovereign nations, are allocated limited freedoms by the U.S. government, including the ability to set up Native police forces and a Native judiciary system. Yet Native Americans, with a few exceptions, are unable to charge a non-Native who commits a crime against a Native person on tribal land. These cases are then left to federal or state jurisdiction.

“A tribe can make their own law, their own court system, their own police force. But not every tribe has their own legal system or it may not be very developed,” Plumer said. “Say it’s a non-American Indian male — he can kind of just be on the reservation, commit a crime and almost be immune from the law. The state has almost no incentive to prosecute this person for what they did on the reservation.”

Plumer said there can often be a “Las Vegas mindset” about committing crimes on reservations: what happens in Vegas stays in Vegas, consequences included. Despite practicing Native and tribal law for nearly 10 years, Plumer said he has never taken a case involving missing or murdered indigenous women.

Even though Goodwin’s cousin’s disappearance likely took place off tribal land, the investigation led to no arrests. When Tillman-Locket disappeared in February 2007, coworkers state that her estranged husband, Lou Locket, a non-Native, picked up Tillman-Locket from work. Though Locket said he is the last one to have seen her alive, what happened to Tillman-Locket from there is unknown.

According to a 2018 National Congress of American Indians report, more than four out of five indigenous women have experienced some sort of violence in their lifetimes. The report found 96 percent of indigenous women experienced violence at the hands of a non-Native. These cases lead to few prosecutions.

In addition, Native American and Alaska Native women are at least two times more likely to be sexually assaulted than women of any other racial group, according to the NCAI.

While Minnesota has the ninth highest number of cases open in the U.S. of murdered and missing indigenous women, according to the UIHI, Stark said there is a data shortage. Currently, there is no formalized database for missing and murdered indigenous women at the state level.

According to Stark, many Native communities require more culturally appropriate resources that address the issues of violence against women. She added that addressing this issue shouldn’t just fall on the shoulders of Native women.

“If men decided … to stop sexually assaulting and raping and beating Native women, it could all end tomorrow,” she said.

‘We just want people to recognize this as an issue’

On May 1, to mark the beginning of “Indian Month,” the University’s Circle of Indigenous Nations held two ceremonies along the muddy banks of the Mississippi River below Coffman Union.

Nelda Goodman muttered a prayer alongside Native community members and students to participate in a small ceremony remembering the indigenous women who have disappeared or been murdered. Goodman, the wellness and recovery case manager and elder in residence for the University’s American Indian Family Center, said indigenous communities used to respect the river as a life-giving source. Now, the river acts as a harbinger of death.

“Many of our women have been found in the Mississippi. Their bodies have been tossed in and later found … even children,” Goodman said.

She threw a dried flower into the river for the lost and stolen loved ones; others threw in tobacco, which is often seen as sacred by the Native community.

While Goodman turned to tradition as an outlet for her grief, others like Angela Two Stars, have opted for a more artistic expression of their emotion.

Two Stars is the curator of the “Bring Her Home: Stolen Daughters of Turtle Island,” an art exhibit located at All My Relations art gallery. It features 20 indigenous artists and highlights the ongoing epidemic of murdered and missing Indigenous women, Two Stars said.

“What I wanted the audience to take away from the show is not that we’re victims, but that, in spite of these staggering statistics that we face, Native women are strong in their power,” Two Stars said. “Families are continuing to suffer … and they deserve to have a voice for that.”

Two Stars said the topic of murdered and missing indigenous women is coming to the forefront of conversation through art, activism and legislation at both state and national levels.

In Minnesota, a bill making its way through the House allocates funds for a task force to investigate the prevalence of missing and murdered indigenous women in the state.

Though Two Stars said she is thankful for the attention being brought to this issue, she said that it may be too little too late.

“We aren’t these princesses in need of saving,” Two Stars said. “Look at who is at the forefront of this movement – Native women are the ones saving ourselves. We just want people to recognize this as an issue.”