Administrative costs would be cut $15 million per year for six years. 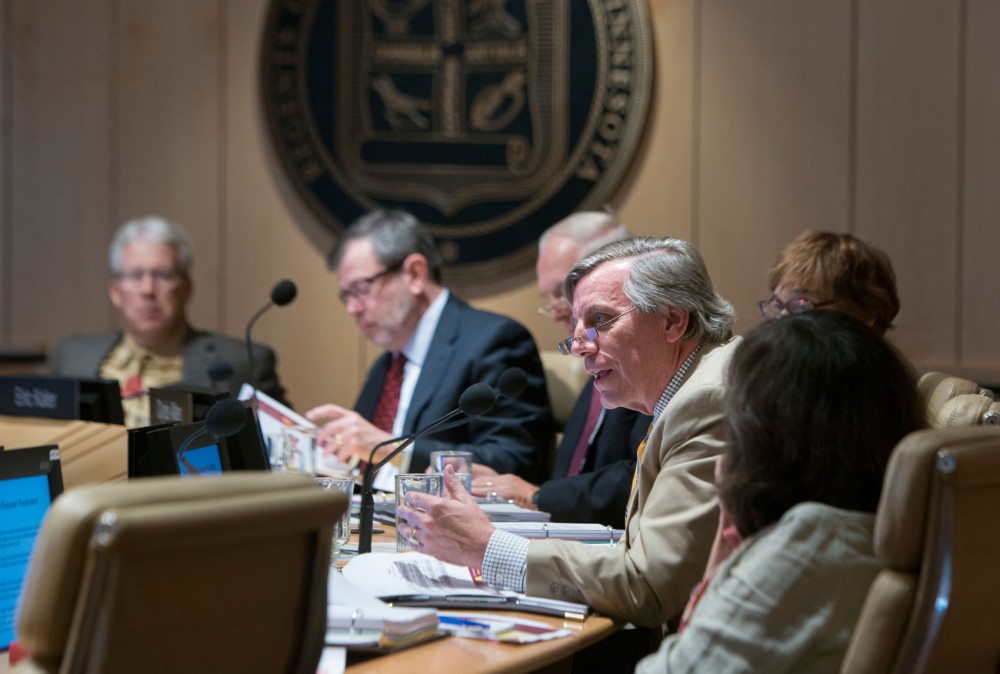 Regent Thomas Devine speaks to the Board of Regents at on Friday at McNamara Alumni Center.

University of Minnesota President Eric Kaler announced a plan Friday to cut administrative costs by $90 million over six years, despite outside reports saying the institution’s spending is on track with its peers.

According to recent findings by University-hired consulting firms, the institution’s spending is within reasonable levels. But at this week’s Board of Regents meeting, Kaler proposed a plan cutting $15 million a year in administrative costs.

The cuts would begin this fiscal year and continue for five more, he said.

“I think it’s time to be more ambitious than we ever have been,” Kaler said to the board.

University Chief Financial Officer Richard Pfutzenreuter said he hopes the bulk of the cuts will come from employees retiring or resigning, but said the University isn’t ruling out layoffs.

“There’s no guarantee at this point,” he said.

The $15 million in cuts per year matches a recommendation from the Legislature.

In January, the University hired Huron Consulting Group for $495,000 and Sibson Consulting for $48,000 to analyze administrative spending.

The Sibson review showed the University’s spending is at “healthy” levels but said there are still areas for improvement.

A separate report by Huron said the University is already taking on “major initiatives to promote efficiency and effectiveness and to reduce administrative costs.”

The Huron report also suggested the University could shrink its managers-to-employees ratio and combine services across multiple departments and colleges to lower costs
further.

Kaler’s plan to cut administrative costs will make the University more financially stable and affordable for students, Bonoff said, though the University must continue to regularly report its spending to the Legislature.

“I think [Kaler is] doing the right thing,” she said. “There really are ways to cut.”

Joelle Stangler, student representative to the board, said she agrees with Kaler’s announcement “on the surface” but wants to look further into the specifics of his plan.

“Any move toward making the University more efficient is a move in the right direction,” she said.