Stephanie Samedy, Lauren Barnes and Jasmyn Martin have all played in 22 matches or more this season. 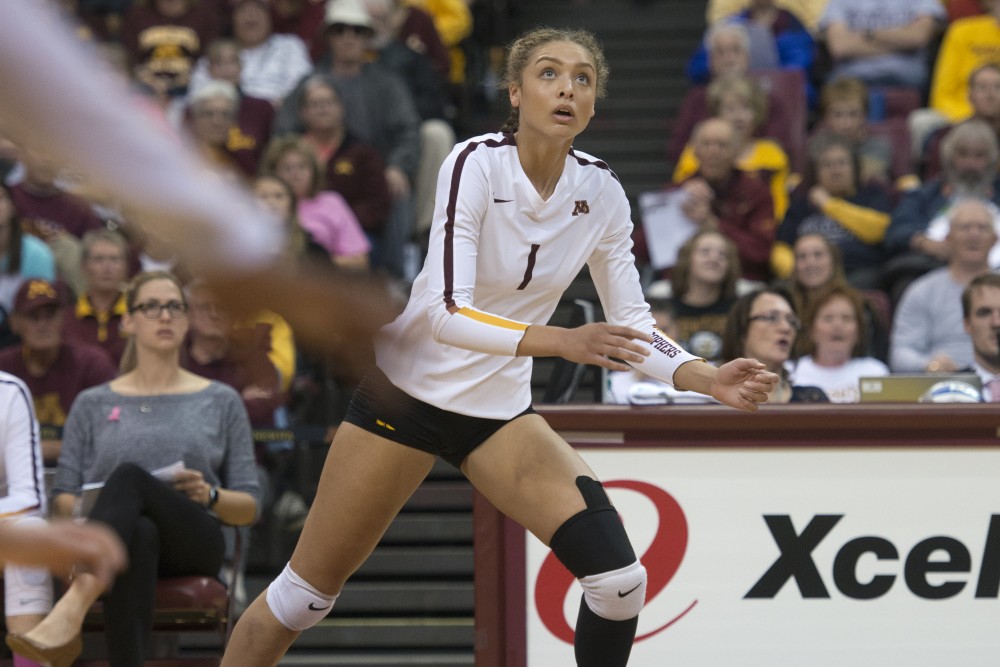 Outside hitter Jasmyn Martin prepares to hit the ball against Purdue on Wednesday, Sept. 11, at Maturi Pavilion.

Minnesota heads in to its match against Purdue as No. 2 in the country, with a 23-2 record to boot.

Many of the team’s key contributors are from this year’s freshman class. Stephanie Samedy, Lauren Barnes, and Jasmyn Martin have all played extensively for the Gophers this season, with 22 starts or more by each.

“We would be struggling to play without them because there is a lot of them,” said head coach Hugh McCutcheon. “They are critical. They’ve all come in and contributed in lots of different ways and are adding a ton of value.”

The class is headlined by Samedy, who’s been outstanding this year. She leads the Gophers with 340 kills total and an average of 3.95 kills per set. Samedy has also piled up 258 digs and 65 total blocks this season. She has been an integral part of the starting lineup since day one.

Barnes has been another key member of the Gophers starting unit. She has been a defensive specialist this year, playing in all 86 sets. Barnes is fourth on the team with 173 digs.

Martin and fellow freshman Sydney Kleinman have received their fair share of play time as well this season. Martin has played in 67 of the team’s 86 sets this season. She has made the most of that time on the court by racking up 147 kills and 36 blocks. Kleinman has played in 25 sets. She has produced 35 kills for a 1.4 kill per set average.

“As a [freshman] class, I think we’re doing a pretty good job,” Samedy said. “We’re just trying to take on whatever role we have on the team and giving the most that we can for our teammates.”

Going into the season, McCutcheon didn’t know how much he would rely on his freshmen to contribute.

“It was hard to say,” McCutcheon said. “We knew [the freshmen] were talented, but we didn’t know if they would be any good or not. It turns out that they are doing well.”

One thing that makes this freshman class’ performance more impressive is that they’re doing it in their first semester. As they adjust to life as college students, there is a lot going on in their lives in addition to volleyball.

“There are challenges, but my teammates always give great advice,” Samedy said. “They always help us out, just making sure we know what we should be doing. They tell us we should front load everything in terms of school, so it hasn’t been too bad.”

If this freshman class can continue to perform, a playoff run could be around corner for the Gophers. They just can’t get too far ahead of themselves.

“We don’t look too far ahead,” Samedy said. “We just take it point by point, focus on the things we need to do within each point, to make sure that we get the result that we want.”