Despite growing use, water pipes are often misconceived as drug paraphernalia. 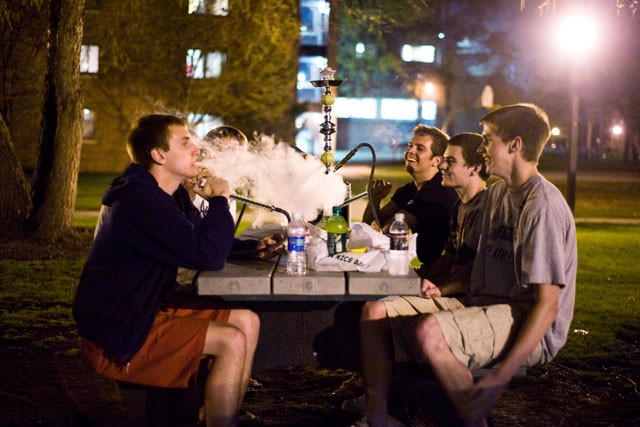 Freshman students try out their new hookah on their dorm lawn.

University of Minnesota student Joel Morehouse went to a coffee shop to study over the summer in Buffalo, Minn. He opened his trunk to retrieve his books before heading inside.

A passerby noticed a pipe in his car. Unknown to the observer, the pipe was a hookah, a water pipe used to smoke a certain kind of tobacco. About 15 minutes later, the police arrived and asked to search MorehouseâÄôs vehicle.

Because smoking hookah is a relatively new activity among college students, MorehouseâÄôs experience reflects the stigma many others have faced when using tobacco pipes, specifically hookahs.

University student Shane McIntosh said that he had used a hookah in high school. He thought the stigma was caused by misconception and not knowing the intention and purpose behind them.

“ItâÄôs not designed for drug use,âÄù Sak said, though he acknowledged some individuals might try to use the pipes for illegal purposes.

Sak said when he moved to Minnesota seven years ago, it seemed that smoking hookah was uncommon. He started selling wholesale tobacco and accessories and claims he had a role in popularizing it.

On the University campus, students are not allowed to use or store the pipes in residence halls, but are permitted to use them in designated smoking areas.

Katie Eichele, coordinator of Judicial Affairs in Housing and Residential Life, said that incidents involving hookahs occur infrequently. The pipes could be considered paraphernalia, which Minnesota statute defines to as âÄúall equipment, products, and materials of any kindâÄù that are used for manufacturing, or consuming a controlled substance.

âÄúIâÄôve seen a couple of cases where students have had them in dorms,âÄù she said. In this case, Eichele said the student would be asked to take the pipe home.

Andrew Schneider, chemical engineering first year, said hookah use wasnâÄôt popular at his high school and that he had never used one, but he had seen the pipes around campus.

Sean Gerrety, who has worked for Hideaway for eight months, says the trend is growing.

The only legal restriction on hookah stems from the Minneapolis smoking ban, which was enacted in March 2005 and went statewide in 2007. Both apply to restaurants, bowling alleys and establishments where liquor is served, but not necessarily to tobacco shops.

The City of Minneapolis Smoking Ban Ordinance does not prohibit smoking within any distance of the entrance, but private businesses can establish a perimeter. The University requires smokers to maintain a distance of 25 feet.