U tees up golf’s challenges

Facing lagging participation, the USGA and the University are looking at ways to increase interest in the sport. 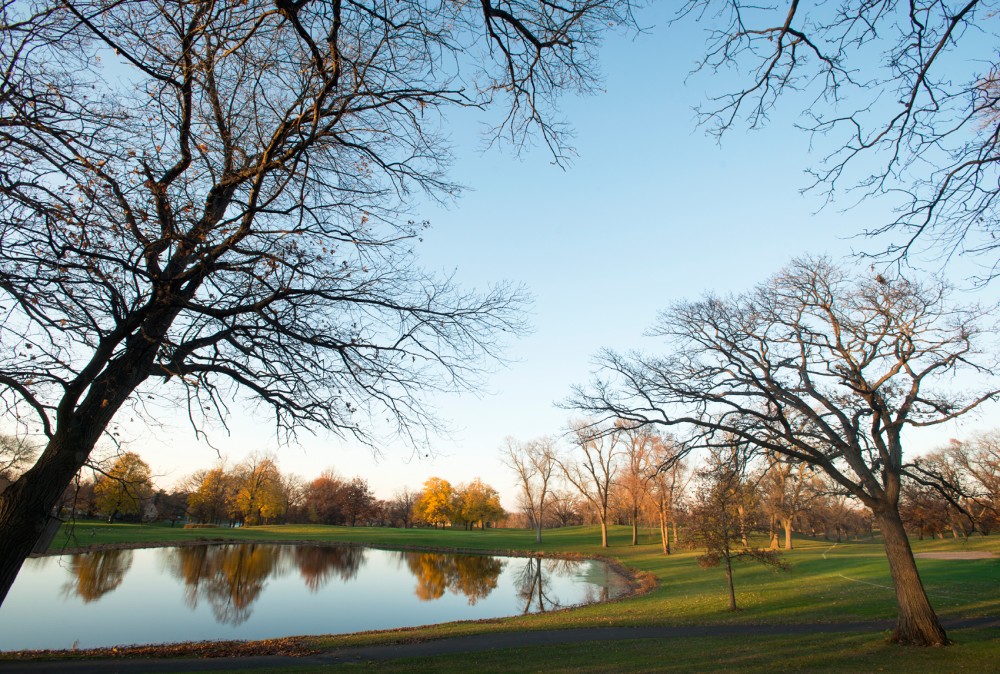 Les Bolstad, the University's golf course and home to the practice facilities for both men and women's golf sits on St. Paul campus on Saturday. The University has entered a five-year research partnership with the USGA in an attempt to improve upon the state's plethora of golf courses.

Eliana Schreiber
Minnesota has the highest number of golf courses per capita in the country, but with golf participation at an all-time low, the University of Minnesota is looking into ways to change the game.
Last week, the University announced plans to begin a five-year research project with the United States Golf Association to make golf more sustainable and attractive to potential players.
Studies in recent years have shown that the game’s cost and the time commitment are driving away golfers, said Rand Jerris, USGA senior managing director of public services.
In the 1990s, more than 2,600 golf courses opened across the country. But only about 500 opened in the 2000s, according to the National Golf Foundation.
Jerris said the research will look at ways to make golf more accessible, like offering shorter golf rounds.
Additionally, USGA leaders want to study the relationship between the length of a courses’ grass and the time people spend playing the game, Jerris said.
The research will also focus on golf’s environmental impacts. Researchers will examine water consumption and quality, he said, as well as make sure golf courses aren’t overusing water.
“We think water is going to be the most critical factor for the long-term sustainability of the game,” Jerris said.
The strategies could ultimately reduce the cost to play the game, Jerris said, adding that some golf courses spend millions on water alone.
Jerris said the water budget of a typical Southwestern golf course could equal the entire maintenance cost of a Midwestern golf course.
Much of the research will happen on the University’s 86-year-old, recently rennovated Les Bolstad golf course.
“Golf courses are going to have to look at their operations differently,” said men’s golf head coach John Carlson.
He said the project could attract better recruits to the University.
“From a recruiting standpoint, we’re always looking into ways we can push the envelope as far as what we can sell to our recruitments, and if we can sell that the USGA is in partnership with our university and our university alone, that’s a benefit,” he said.
Brian Horgan, a professor in the Department of Horticultural Science and an extension turf grass specialist, is leading the partnership.
Horgan said his department has been receiving grants for environmental research on turf grass from USGA for the past 30 years.
The USGA has a team of about 10 scientists, Jerris said, and partnering with the University will allow them to do more intensive research.
“We’re at a unique moment in time where golf is facing some real challenges as an industry,” Jerris said.
Horgan also said the game is changing, adding that its problems might not be the same throughout all areas of the U.S.
“We can learn from what’s happening from different parts of the country,” he said, “and start to implement strategies here to be prepared for the fact that water is going to be more of an issue down the road than it is today.”
Delete Image
Align Left
Align Center
Align Right
Align Left
Align Center
Delete Heading