Gophers catcher Kyle Knudson signed with the Twins last Wednesday, but his initiation to the major began years -- and plenty of scouting trips -- ago. 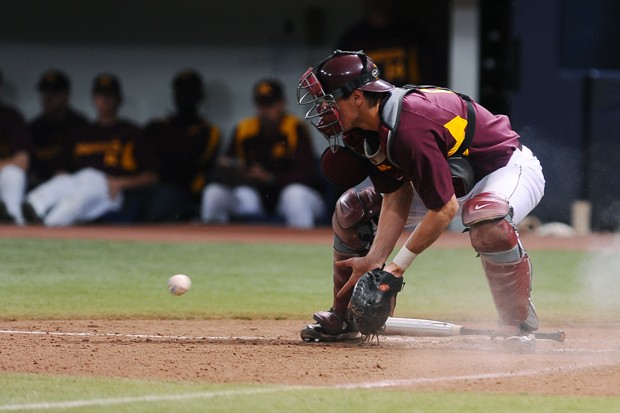 The Minnesota Twins took Knudson with the 285th overall pick (ninth round) in the 2010 MLB amateur draft, and he signed within a day. He will likely play for the Elizabethton Twins of the Appalachian League, whose season starts June 22.

Knudson’s initiation to the major leagues began years ago and with plenty of scouting trips and reports collected by professional clubs.

Mark Wilson, an area scout for the Twins, canvases six states and all of Canada in search of major league talent. Wilson’s most notable prospect was a Cretin-Derham Hall catcher by the name of Joe Mauer.

Wilson said he started watching Knudson play as a sophomore at Maple Grove high school, and, like he does with all other prospects, began compiling reports on every aspect of his game from his on-field talent down to his demeanor in the dugout.

Wilson, along with about 14 other area scouts for the Twins that cover the United States, Canada and Puerto Rico, continually builds “follow lists” of players that perk his interest, even if they are not eligible for the draft.

Before the draft each year, the area scouts rank their prospects into categories of where the player might go in the draft, using their reports as a guide. A handful of regional supervisors then combine the reports into more regional preferences, and an even smaller number of crosscheckers cross the country and combine regional lists into a more comprehensive nationwide preference list.

About a week and a half before the draft, the scouting department meets and debates in the draft room, ranking players in each position.

Although Twins scouts all use the same numerical scale to grade certain abilities of a prospect in their reports, Wilson said the process of ranking players from different areas of the country is a subjective process.

“There isn’t a science formula to it — it’s all opinion,” Wilson said. “Much like going to an art museum, someone else is going to like a sculpture for different reasons.”

The decision on who to draft is ultimately up to the scouting director, who has to take a number of factors into consideration before picking a player, including the likelihood they will sign with the team.

According to MLB rules, players can be drafted straight out of high school, or after their junior or senior season in a four-year college, but can tell the team they won’t sign if they are drafted in a late round. This lets them improve their stock and come back to be drafted in a later year. That means players must decide if they want to try professional ball right out of high school or spend at least two years in college.

“I knew I wanted to go to college,” Rosin said. “I’m glad I made that decision.”

Junior closer Scott Matyas was drafted in the 40th round by the Milwaukee Brewers, and will likely return for his senior year with the Gophers.

Other than talent and the “signability” of a player, Twins vice president of player personnel Mike Radcliff said the organization pushes versatility and ability to play multiple positions, because it never knows what spot the Major League squad will need to fill.

“It’s hard to go from the rookie league … to the big leagues,” Radcliff said. “You want to have some versatility as a player just to give yourself a chance to survive.”

Michael Kvasnicka was projected to be drafted as a catcher, but during a pre-draft workout, the Astros had him bring a third baseman’s glove to see him catch ground balls. Kvasnicka was surprised when the Astros announced they would play him at third base after drafting him with the 33rd overall pick.

“I knew that if anybody was going to do that, it would have been the Astros, but I still didn’t think they were going to do it,” Kvasnicka said. “To me, that’s a great thing … because it means that they have a plan for me and that they have a need or some kind of importance for me.”

Troy Hoerner, an area scout for the Astros who both scouted Kvasnicka and was drafted by the Twins in 1988 along with Kvasnicka’s father, Jay Kvasnicka, said he will play catcher and in the outfield as well as third base until they determine the best fit for him.

On Monday, Michael Kvasnicka signed with the team for an undisclosed amount.

Kvasnicka added that he is excited to have the scouting and drafting process finished so he can focus on baseball. But for Radcliff, the scouting process and the ability to draft well is what breeds success on the field in the major leagues.