Proposals range from $76 million to $111 million for the University. 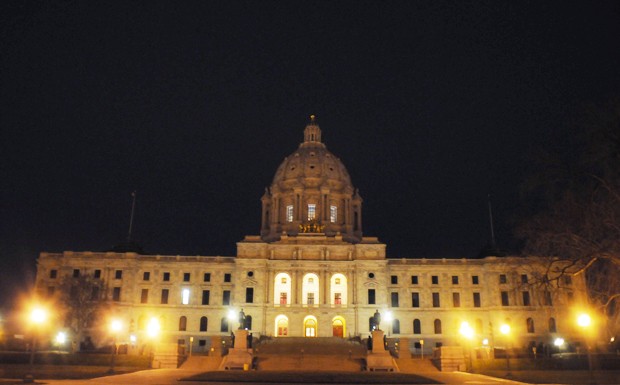 Three different versions of a state bonding bill are now floating around the Capitol. All three proposals allocate at least $75 million for University of Minnesota projects. One has already passed its first legislative hurdle. And the University isnâÄôt satisfied with any of them. In the first day of the 2010 Legislature session, Minnesota legislators wasted no time putting forth bonding bill proposals to stand next to the governorâÄôs, released nearly three weeks ago. The House and Senate proposed separate bonding bills on Thursday, both with significantly higher price tags and including different items than Gov. Tim PawlentyâÄôs. The bills both came in just under $1 billion, while PawlentyâÄôs total was $685 million. The biggest discrepancy between the billsâÄô higher education proposals was over support for a new physics and nanotechnology building at the University. While the governor included full funding for the facility, the House bill didnâÄôt include any funding for it, and the Senate only included $5 million in planning money for the project. Both the House and Senate bill supported some level of funding for all of the UniversityâÄôs bonding project requests, including the renovation of Folwell Hall, a new Itasca biological research station and an American Indian learning center in Duluth âÄî three items that were not included in the governorâÄôs. University funding in the DFL-majority House bill was significantly less than the governorâÄôs âÄî $77 million compared to the governorâÄôs proposed $100 million âÄî in large part because of the exclusion of the physics building. The Senate bill was the most generous to the University, allotting $111 million of the $240 million it requested. On Thursday, the Senate Capital Investment committee approved the bill, a step that wasnâÄôt taken until early March last session. âÄúWeâÄôre disappointed,âÄù University CFO Richard Pfutzenreuter said of the bills. With bills significantly larger than the governorâÄôs, Pfutzenreuter expected much higher amounts for the University, he said. Rep. Phyllis Kahn, DFL-Minneapolis , said while she was mostly satisfied with the HouseâÄôs bill, she was upset that it didnâÄôt include the physics and nanotechnology building and said it was the âÄúmost shortsightedâÄù part of the bill. Kahn received a BachelorâÄôs degree in physics from Cornell University, and a Ph.D. in biophysics from Yale University. âÄúWhen weâÄôre trying to talk about advancing the countryâÄôs intellectual infrastructure and moving forward and taking a lead in subjects that are really important to the country, I think to totally omit that from the bonding bill is a travesty,âÄù Kahn said. Kahn supported including planning money for the facility in the bill to move the project ahead, as included in the Senate bill. Rep. Alice Hausman, DFL-St. Paul, the chairwoman of the House committee that deals with the bonding bill, said proposals arenâÄôt necessarily dead if they arenâÄôt included in ThursdayâÄôs initial bills. âÄúIâÄôm totally open to arguments the Senate might make relative to the bonding bill,” she said. Also different between the bills was the amount of University Higher Education Assets Preservation and Replacement (HEAPR) funding in the bill. The HouseâÄôs and governorâÄôs bill both support $40 million of the $100 million the University requested, while the Senate version was higher at $65 million. âÄúWeâÄôre just going to continue to make our case and fight for the projects on our list,âÄù Pfutzenreuter said. âÄúItâÄôs not over. WeâÄôll continue to go at âÄòem.âÄù