After starting undefeated, Gophers drop four in a row 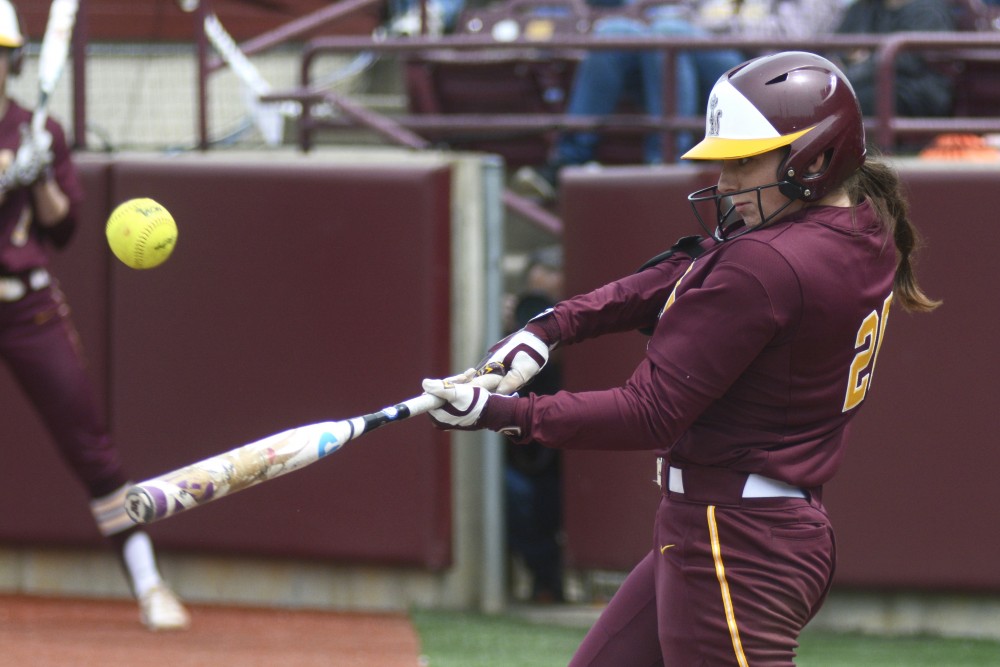 The Gophers first two weekends of their spring could not be more different.

No. 14 Minnesota (5-4) lost all four games of the weekend after starting the season 5-0 last week.

“When you’re playing good opponents and the matchups are even, that’s probably going to come down to one or two things,” head coach Jamie Trachsel said. “They ended up getting that one play that made the difference.”

The Gophers kept some of the games close. The first and second games were kept within a run, but they weren’t able to get the magic to pull off victories.

Minnesota faced-off against No. 8 Florida State and Notre Dame in the Big Ten/ACC Challenge, but it didn’t end up with a win in any of the four contests.

The Gophers opened the weekend against Florida State on Friday and despite trying to mount a comeback, lost 3-2 in the opening game. Minnesota was down 3-1 going into the seventh inning and scored a run in the final frame. One was not enough, though, as the Gophers suffered their first loss of the season.

“It was super cool to see the team develop over the weekend,” utility player Carlie Brandt said. “We had some tough competition, but I think we were really tested this weekend.”

Brandt got two hits in the first game and pitched three innings for Minnesota in the last game of the weekend.

Beyond the first loss of the season, Minnesota came back Saturday for a double-header, one against Notre Dame and another against the Seminoles.

The first game against Notre Dame was reminiscent of the prior day’s game against Florida State. While the score was higher, Minnesota attempted another late-inning comeback only to fall short by a run, losing 6-5.

As the Gophers went into the final frame down 6-2, the offense over doubled their runs from the rest of the game, but the three runs in the late comeback weren’t enough to get the team the victory against the Fighting Irish.

“I think we could have done something differently at the beginning of the games,” outfielder Maddie Houlihan said. “There’s things we have to work on. Knowing we can compete with a top-10 team in the country is encouraging.”

Houlihan drove in two of the Gophers runs during the final inning in the comeback attempt.

The score was 6-3 Seminoles going into the seventh inning and a three-run home run doubled the Seminoles lead on the Gophers.

The game ended 9-3, with the Gophers finishing the weekend against the Seminoles 0-2.

Sunday featured an early game to close out the tournament, with the Gophers going for the victory in the final game of the weekend. They fell to Notre Dame 3-0.

Minnesota returns to action next week in the Diamond Nine Citrus Classic from Orlando.

“We need to get better in every single area,” Trachsel said. “We’re coming back here to focus on every part of our game to keep getting better.”