Urban farmers are abandoning birds, a trend that climbs when temperatures drop. 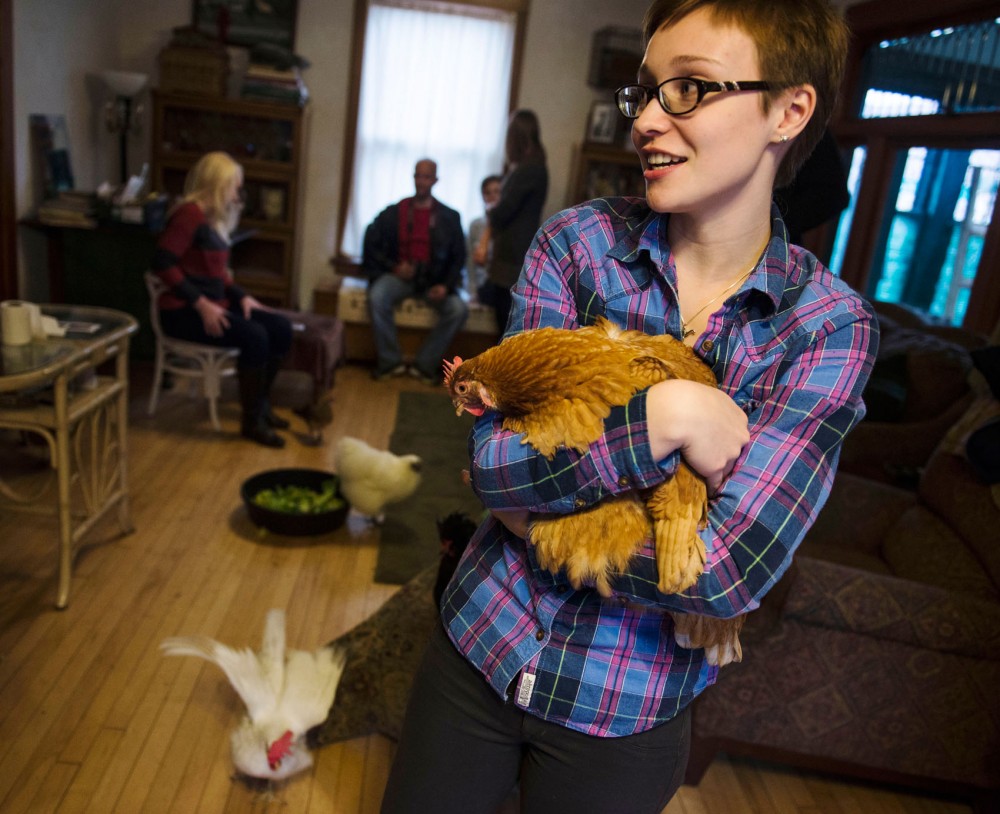 Mary Britton Clouse has 20 rescued chickens living in her Minneapolis home. On Sunday, one wandered off.

She soon found the lost companion in her house, which doubles as a sanctuary for stray and abandoned chickens.

Her organization, Chicken Run Rescue, sees an increase in rescue requests during the colder months when people do not always want to take care of their birds.

“The urban chicken boom reflects this interest in local, sustainable and organic agriculture, but there are some realities to it that people don’t confront,” she said.

Jane Shey, city contractor for the program Homegrown Minneapolis, said chicken raising has a strong presence in the city because of its immigrant community and because residents use eggs as an inexpensive source of protein.

“Many people, depending on where they came from, raised chickens where they lived before,” she said, “and so in some ways, it’s a natural extension.”

There are no city restrictions to how many chickens a resident can request to raise, but properties must pass city inspection before residents obtain a permit.

“Over the years, we’ve loosened up and made it a little easier for people to keep chickens,” Ward 2 City Councilman Cam Gordon said. “I know [some] are concerned that they’ve seen more chickens abandoned, turned in and abused.”

The number of abandoned roosters and hens in Minneapolis has increased exponentially since about 2007, when interest in raising backyard chickens began to increase, Britton Clouse said.

Chicken Run Rescue received only six rescue requests when it opened in 2001, she said. Last year, it had nearly 500.

Thelen estimated most of the loose chickens MACC deals with are owned by people without proper city permits.

There are currently 278 permits in Minneapolis, but Britton Clouse said she thinks only about 3 percent of chickens in the city actually belong to licensed owners.

Thelen said MACC probably received 10 to 15 permit application requests a week during the warmer months this year. Applications are less common in the winter, she said.

Applying for a one-year chicken permit costs $50, compared to $150 for a five-year permit.

Currently, chickens can only be raised at a home or permanent residence and can’t be slaughtered.

When Homegrown Minneapolis was drafting its Urban Agriculture Policy, Britton Clouse unsuccessfully proposed a cap on the number of chicken permits allowed in the city.

“We recommended to the city of Minneapolis that they cap the number of permits they issue because they don’t have the resources to inspect and regulate and enforce anti-cruelty laws as it is,” she said.

Shey said the Homegrown Minneapolis website does not offer any educational resources, but she might introduce them in the future.

Gordon, who has championed many urban agriculture initiatives, said more education on raising chickens could “probably prevent some abandoned chickens.”

Britton Clouse found her chicken 10 minutes after losing it Sunday. She picked the hen up, returned it to its coop and admired it.