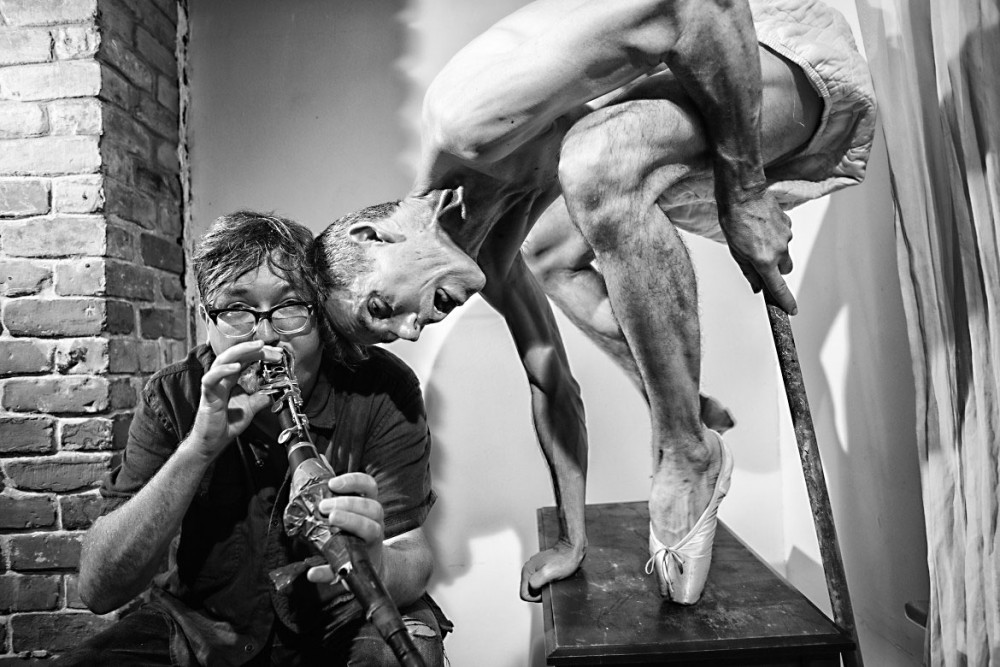 Brendan Connelly and Scott Heron will perform their piece "Appalachian Spring Break" this Friday and Saturday at Bryant-Lake Bowl.

Donning a tall 18th century white wig, Scott Heron teetered on his pointe shoes on a table before sliding off to collapse beneath it. The stunt was one small piece of his latest dance performance with composer Brendan Connelly titled âÄúAppalachian Spring Break.âÄù In the piece, Connelly and Heron present a radical dance performance exploring Americana and the relationship between composer and choreographer. The pair will bring their show to the Bryant-Lake Bowl Theater on Friday and Saturday. Connelly said the title and parts of the dance spur from Martha GrahamâÄôs 1944 famed radical ballet and Aaron CoplandâÄôs composition âÄúAppalachian Spring.âÄù âÄúWeâÄôre kind of thinking about [âÄúAppalachian SpringâÄù], but really not, and we kind of just rip it apart, and thatâÄôs where the âÄòspring breakâÄô comes in,âÄù Connelly said. In addition to Martha GrahamâÄôs ballet, the piece is also influenced by documentary filmmaker Ken BurnsâÄô style of addressing American history, Connelly said. âÄúItâÄôs going to be very odd, funny, fascinating, and the whole piece is under an hour,âÄù Heron said of the performance. The joint effort marks the first project between Heron and Connelly, who both primarily work as collaborative artists. The two live in New Orleans and met through the arts community there. Rather than a typical dance performance where dancers perform to a set piece of music, Connelly and Heron create different sounds, and both act as performers. For a brief segment, Connelly may play parts of âÄúAppalachian SpringâÄù as Heron dances, but at other times the duo may blow hysterically into clarinets while waving them around. âÄúThatâÄôs the problem with most dance, is that thatâÄôs the relationship of music to movement âÄî the music is set in stone and the choreographer inspired by the feel of it,âÄù Connelly said. âÄúWeâÄôre constantly kind of derailing that, blowing that up, because thatâÄôs more interesting.âÄù Both Heron and Connelly hold experience playing clarinet. When considering this connection, they decided to incorporate the instrument as a main component of the piece. âÄúWe kind of relish that dork solidarity as clarinetists and owning it,âÄù Heron said. In part, the duo is bringing the show to Minneapolis because of HeronâÄôs previous collaborations with HIJACK, the Minneapolis-based dance duo comprised of Kristin Van Loon and Arwen Wilder. For about the past dozen years, the three have choreographed dances together and have occasionally performed them in Minneapolis. Van Loon said HIJACK first met Heron at analumni show at Colorado College. âÄúHe blew our minds. He did a solo, and it was so strange and so beautiful. It was like one of those magic experiences as an artist where itâÄôs like, âÄòI have found my kin out in the world,âÄôâÄù Van Loon said. The duo immediately wanted to work with Heron, Van Loon said. At a festival in Russia, the three met again and choreographed their first piece in a coat closet, she said. âÄúNone of us could even stand up fully, so we made this trio where weâÄôre all stooped over,âÄù Van Loon said. âÄúWe bought some pitch pipes, and we played those, and we screamed. We had hysterical fits, and we got all the translators at the festival to sing a Russian drinking song. âÄ¦ That was how artistically we all introduced ourselves to each other back in 2002.âÄù As artistic director at Bryant-Lake Bowl, Van Loon booked Heron and ConnellyâÄôs show. She said she looks forward to seeing the piece performed in the venueâÄôs small space. âÄúTo us, the most traditional form of dance youâÄôd see where someone makes music and someone dances in rhythm to the music is about the dumbest, most boring way you could consider that relationship,âÄù Heron said. Appalachian Spring Break Where Bryant-Lake Bowl, 810 W. Lake St., Minneapolis When 7 p.m. Friday and Saturday Cost $10-$15