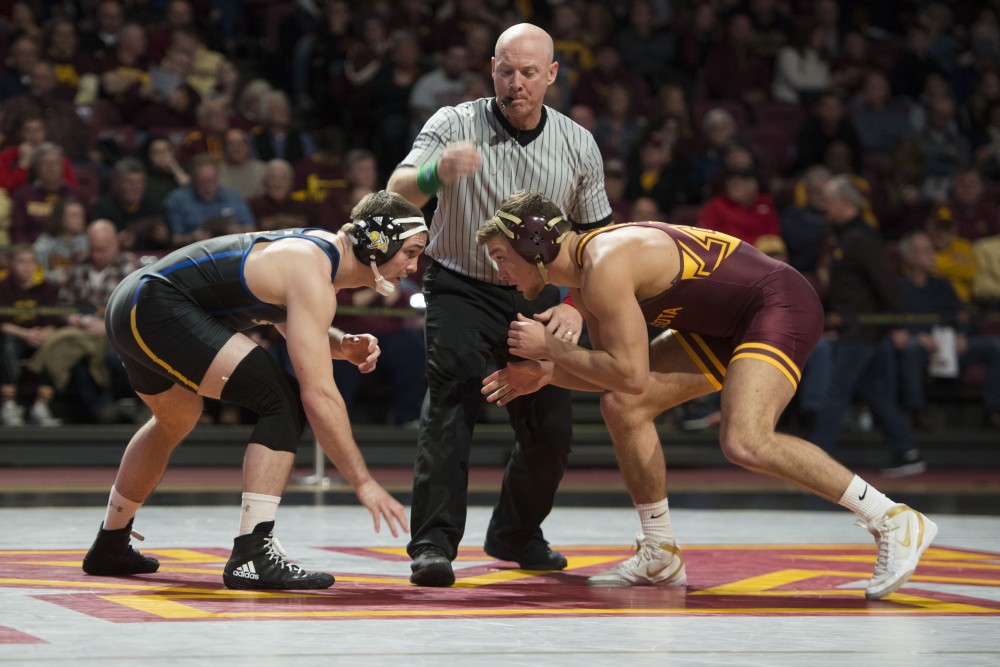 Redshirt junior Devin Skatzka at 174 competes during the match against South Dakota State on Sunday, Nov. 25, 2018 at Maturi Pavilion.

After opening their Big Ten season with an appearance from Gophers legend Brock Lesnar and a win over Wisconsin, the Gophers’ wrestling team split their next pair of conference duals in Michigan, competing in both without top-ranked heavyweight Gable Steveson.

Steveson sustained a minor injury against Wisconsin and was rested against Michigan State and Michigan to avoid aggravating the injury which, according to head coach Brandon Eggum, is not expected to affect Steveson long term. Brayton Lee also missed both duals due to illness.

Even without Steveson and Lee in the lineup, the Gophers topped Michigan State on Friday, 25-10. In the first match of the night and his dual debut, 157-pound Ryan Thomas notched a 5-2 decision over No. 21 Jake Tucker, landing a takedown in the first and a reversal in the second to take the upset and give Minnesota the early 3-0 lead.

“Ryan Thomas, I thought, did excellent on Friday,” Eggum said. “He had a top-ranked opponent and he picked up a big win there for himself.”

Following Thomas’ debut victory, 165-pound Bailee O’Reilly and 174-pound Devin Skatzka added two more victories by decision to give the Gophers a 9-0 lead. Skatzka’s victory marked his 100th for his career, earning the 10-5 decision in his home state of Michigan.

“I think it just shows consistency,” Skatzka said. “That’s what I strive for, just to be as consistent as possible.”

At 197 pounds, redshirt senior Hunter Ritter pinned Michigan State’s Nick May at 2:27 as the Gophers extended their lead, 15-3. At 125 pounds, Patrick McKee added a major decision over Logan Griffin as Minnesota earned victories in three of the last four matches to secure their second conference dual win.

On Sunday, the Gophers returned to the mat in Ann Arbor, Michigan, looking to stay undefeated in the Big Ten. Starting at 141 pounds, senior Mitch McKee landed three first-period takedowns en route to an 8-5 victory, giving Minnesota the 3-0 lead.

At 165 pounds, O’Reilly got the Gophers back on track after Minnesota dropped the previous two matches. He took a 17-8 major decision, by way of a reversal in the first period and three takedowns in the second. Minnesota took a 7-6 lead. Skatzka followed suit with a dominant performance against Max Maylor, securing the technical fall 18-2 and the Gophers climbed ahead 12-6.

It appeared Minnesota regained their momentum with back-to-back victories, but Michigan rattled off three in a row to take an 18-12 dual lead. During that stretch, No. 2 Mason Parris pinned 197-pound Garret Joles who had bumped up to heavyweight for Minnesota with Steveson out. Steveson’s injury put the much anticipated matchup between the top heavyweights on an unfortunate delay.

Falling behind, the Gophers needed victories in the final two matches to secure a third straight conference win, and Patrick McKee initially put Minnesota in position. Tied at two after three periods, McKee landed a takedown in overtime to secure a 4-2 decision, cutting Michigan’s lead to three.

It all came down to 133-pound Brent Jones. Jones fell behind 4-1 in the first as Joey Silva landed two takedowns in the period. Silva added another in the second, and another in the third, eventually earning the 11-3 major and giving Michigan the 22-15 win over Minnesota.

“We’re a little upset not figuring out a way to come up with the win there. We thought that even though we weren’t favored to win, we felt like with some small upsets, we could of,” Eggum said.

The Gophers will resume Big Ten action on Jan. 26 when they take on Ohio State at Maturi Pavilion.