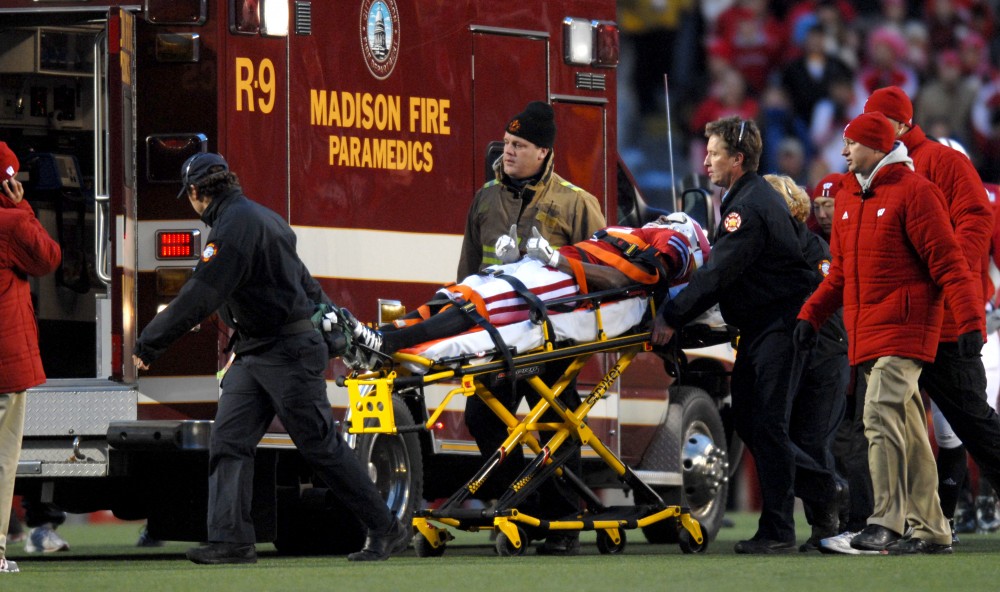 MADISON, Wis. âÄî One of the reasons for Saturday’s game lasting 3 hours, 40 minutes was a lengthy delay as paramedics put Badgers receiver Kyle Jefferson on a stretcher and loaded him into an ambulance. The sophomore from Cleveland, Ohio took Gophers linebacker Simoni Lawrence’s shoulder to his helmet and fumbled the ball in the second quarter and laid motionless on the turf for several minutes. It was a sobering moment for the crowd of 81,228, but Jefferson flashed a thumbs-up sign as his stretcher entered the ambulance, and Badgers coach Bret Bielema said preliminary reports are âÄúvery, very encouraging.âÄù He said Jefferson was knocked out initially, but came back to consciousness and could grab things and move his feet and toes. âÄúFirst and foremost, anytime one of your players is injured the way Kyle was, you become very ready to battle things and the results that may come soon after.âÄù A group of four Gophers players âÄî Willie VanDeSteeg, Jack Simmons, Jay Thomas and Raymond Henderson huddled together on one knee for much of the time, while a group of about 10 Badgers formed a half-circle around the scene while trainers worked. âÄúI saw him coming across the middle and wanted to knock the ball out and tried to put my shoulder on the ball,âÄù Lawrence said. âÄúI’m not sure what happened, but I hope he’s well.âÄù Young at skill positions With coach Tim Brewster’s first recruiting class playing in its first year, the future of the offense looks hopeful. The team’s top two rushers (not including quarterback Adam Weber) and three of its top four receivers on Saturday were all true freshman. DeLeon Eskridge and Shady Salamon split time at tailback, each gaining around 30 yards, while Brandon Green and Brodrick Smith both played much of the game at receiver. Salamon and Green both caught touchdown passes. So what’s the next step for turning the young potential into wins? âÄúThose guys gotta be sophomores,âÄù Brewster said. âÄúI look forward to them being juniors.âÄù VanDeSteeg breaks record Senior defensive end Willie VanDeSteeg broke the school record for career tackles for a loss Saturday, finishing the game with three to bring his career total to 43.5. Defensive tackle John Schlect, who played from 1998-2000, previously held the record with 43.