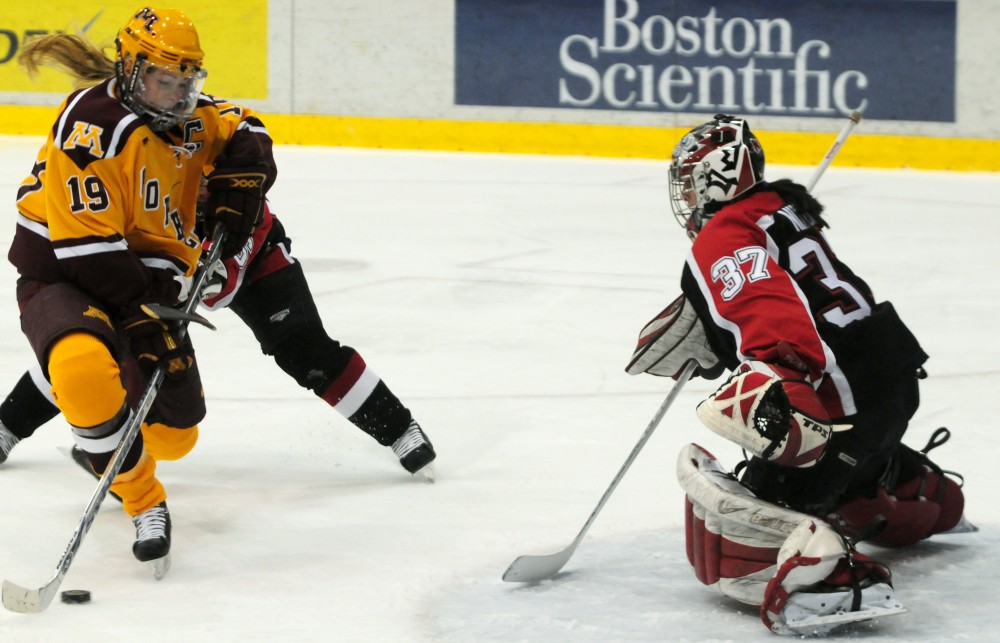 Four Minnesota womenâÄôs hockey players have already won a championship and itâÄôs only November. Senior captain Gigi Marvin, senior Rachael Drazan and first-years Anne Schleper and Jocelyne Lamoureux won gold for Team U.S.A. They played in the Four Nations Cup Nov. 4-9 in Lake Placid, N.Y . Other teams participating were Canada, Finland and Sweden. Marvin said anytime a player can gain international experience, it will greatly help them at the collegiate level. This is only the third time the U.S. womenâÄôs select team has won the gold medal, with Canada taking the other ten gold medals since the event began in 1996. It is the first time Team U.S.A. has won the world championship and the Four Nations cup in the same year. âÄúThere were four girls who werenâÄôt on last yearâÄôs world championship team,âÄù Marvin said. âÄúSo already we have a really solid foundation and the four new girls jelled in well with us in the short time we had.âÄù The four current Gophers were joined by former Gophers Erica McKenzie and Natalie Darwitz, who is the GophersâÄô assistant coach. Gophers coach Brad Frost and equipment manager Kate Anderson also joined Team U.S.A. âÄúMinnesota is certainly a hotbed for hockey in the United States,âÄù Frost said. âÄúTo have six current or former Gophers says a lot about our program and the type of players and people we recruit.âÄù Team U.S.A. skated one practice before beating Sweden 5-2 in their first game. Marvin tallied three assists and the winning goal was an all-Minnesota effort. First-year Jocelyne Lamoureux scored with assists going to Marvin and Drazan, her first of three assists in the game . Frost said even though the team had one practice, it was the leadership on the team that pulled the team together. âÄúIt comes down to leadership and Natalie [Darwitz] does a great job leading that team,âÄù Frost said. âÄúI think it is a really tight-knit group and I think that is a reason for their success.âÄù After losing their second game to border rival Canada 4-2, U.S.A. beat Finland 4-1 and advanced to the championship game where they would face off against Canada. The game was tied 2-2 after regulation and overtime and went to something familiar to current Gophers âÄì a shootout. McKenzie scored the only goal during the shootout in the fourth round to give the U.S. the gold medal. MarvinâÄôs shot was saved in round one while Darwitz was denied in rounds one and two. âÄúI got to learn to put the puck in the net but thatâÄôs why Erica McKenzie is on my team,âÄù Marvin said. âÄúShe buried it. ThatâÄôs fine with me.âÄù Marvin ended the tournament tied second for points with Darwitz, who had three goals and an assist in the tournament. Drazan ended with three assists, Lamoureux had a goal and first-year Anne Schleper, the youngest defenseman, saw action in every game . âÄúItâÄôs a great feeling but obviously we know that this is just a stepping stone,âÄù Marvin said. âÄúItâÄôs kind of like winning your conference and going to the NCAA tournament. The NCAA championship is what youâÄôre going for. ThatâÄôs what the world championship is for us.âÄù