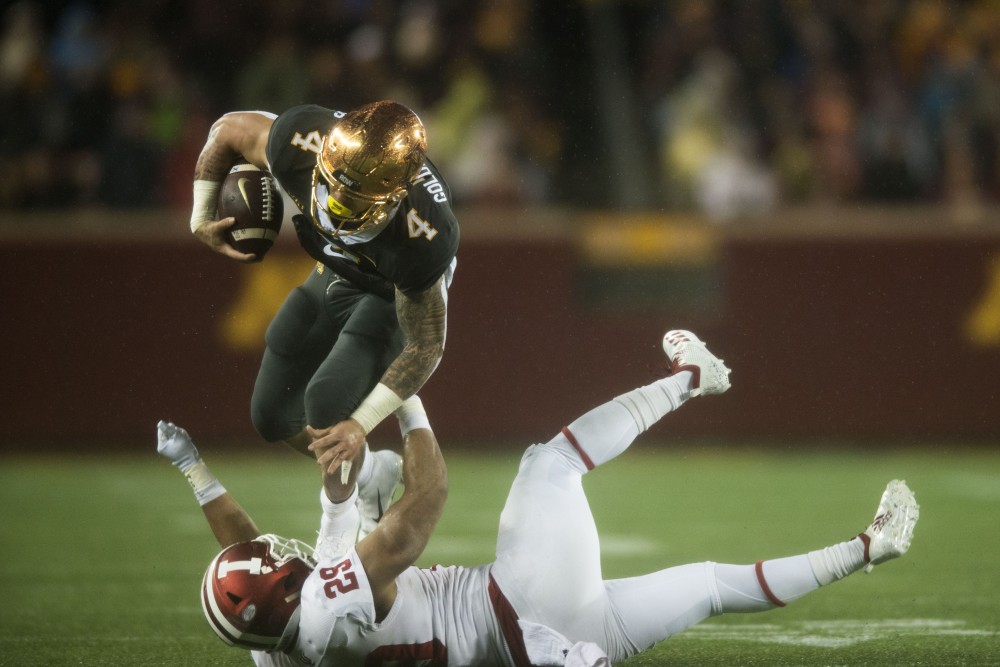 Neither Tanner Morgan nor Shannon Brooks were in the starting lineup a week ago, but on Friday the duo were the driving force in a wild win against Indiana.

Morgan threw for 302 yards on 17-24 passing, three touchdowns and an interception. Brooks ran for 154 yards on 22 attempts for one touchdown but left the game in the fourth quarter with an apparent leg injury.

Morgan was thrust into the starting role against Nebraska when starting quarterback Zack Annexstad left with an internal injury to the midsection after the first half. It was unclear throughout the week whether or not Annexstad would be able to play, and ultimately the keys were turned over to Morgan. Morgan played well in relief against Nebraska — he has 516 total passing yards in the six quarters since taking over.

“Tanner [Morgan] proved why he’s here, … he’s an incredible leader. … He’s what ‘row the boat’ is all about,” said head coach P.J Fleck.

Brooks, who suffered a knee injury prior to the season, was medically cleared to play against Nebraska but did not play in the game. He was arrested in connection to a domestic assault allegation against his roommate on Oct. 14. The ongoing investigation into the incident didn’t stop Brooks’ debut, however his night was cut short due to injury.

“Injury wise, we’ll find out, it’s not the same leg that he had [injured before],” Fleck said.

Fleck also gave details about his decision to play Brooks amid the investigation.

“With the information we have that we felt comfortable making that decision … If things change, that can change,” Fleck said.

The senior running back experienced his fair share of ups and downs as he tried to shake of the rust. He ran for 154 yards but fumbled twice: once on his first carry of the game and the other came deep in Indiana territory which sparked an Indiana comeback.

Brooks’ teammates appreciated having him back on the field.

“It was awesome for Shannon to be back, it’s something that I know was outstanding for him, it was great for us,” said Morgan. “It’s something that makes me smile, everything he’s been through, the way he had that injury. It was just amazing to have Shannon back there with me and helping me out throughout the game.

Morgan showed his inexperience with 10 minutes remaining in the fourth quarter, throwing a ball into tight coverage that got intercepted. However, once Indiana tied the game up, Morgan threw his best ball of the day   on a 67-yard reception to Rashod Bateman for the game-winning touchdown.

“It was a great response from our entire offense,” said Morgan. “Rashod ran a great route and made an outstanding play.”

With Morgan’s solid performance, questions remain about who the starter will be going forward once Annexstad gets healthy.