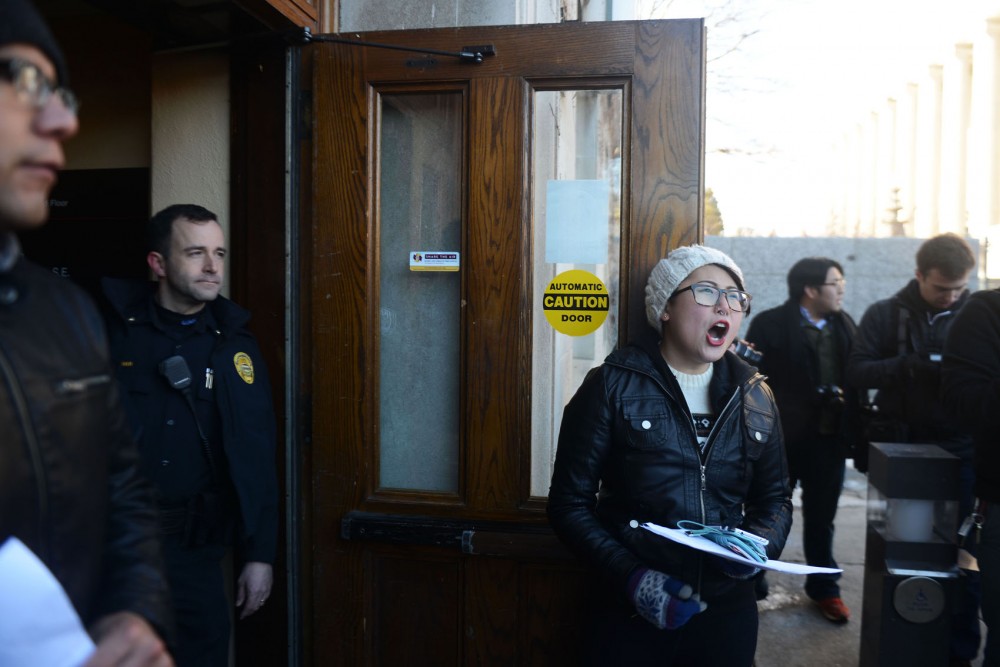 Demonstration leader Tori Hong leads a crowd of protestors to the doors of Morril Hall on Monday afternoon, where campus police prevented access to the building. Demonstrators occupied the campus building in demand of more diversity within the University of Minnesota.

Ten to 15 University of Minnesota students staged a sit-in in President Eric Kaler’s office in Morrill Hall around noon Monday.

Whose Diversity?, a group of mostly University students, put on the protest in response to the University’s lack of progress with the diversity-based demands the group made last spring.

University spokesman Steve Henneberry said Kaler spoke to the students, but would not comment on what was discussed.

Whose Diversity? organizer Tori Hong said police had threatened to arrest the students inside the building, who were still inside around 2:30 p.m. Monday. The building was closed off shortly after the students went inside.

Some of the demands on the group’s list include removing suspects’ race from crime alerts, a plan for increasing the number of students of color on campus and one gender-neutral bathroom in every University building.

The University has been working to meet the students’ requests, according to a statement released Monday from the school.

Kaler asked a group of senior leaders last spring to understand the University’s “campus climate” and make recommendations to improve it.

“We remain committed to having an open dialogue with all students, faculty and staff,” the statement said.

-Elizabeth Smith contributed to this report