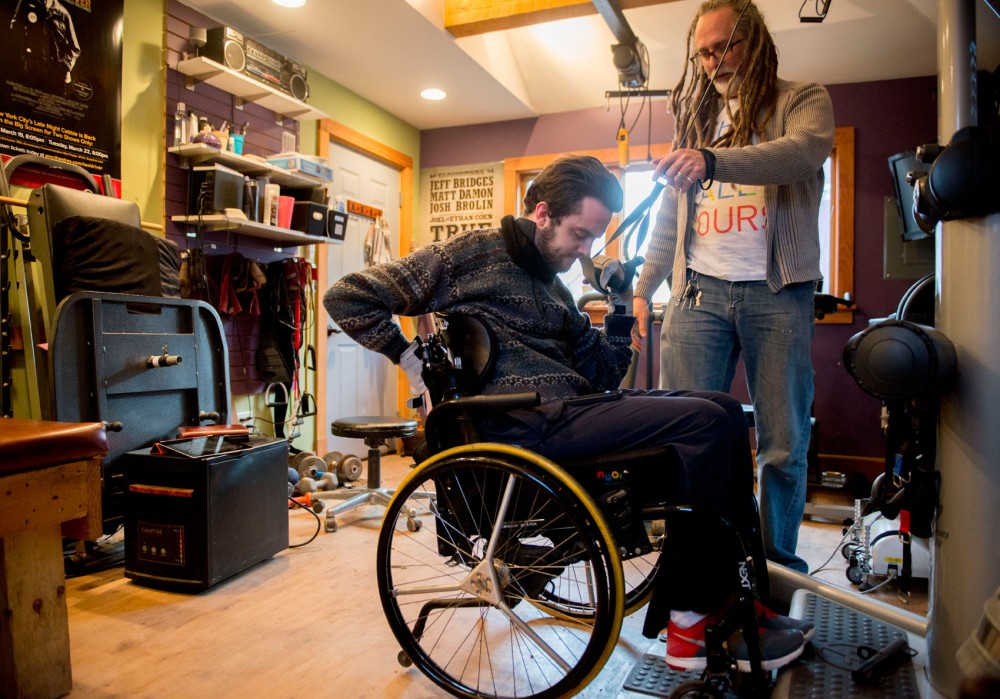 Matthew Rodreick and his son, Gabe, work out in space dedicated to Gabe's physical therapy behind his Minneapolis home on Tuesday. "It's kind of a weird coincidence, but it's normal to me now," Gabe said about his injury. Both Gabe and his father have been campaigning for the last five years and believes it is "time for us to win something."

Sarah Lenz
Matthew Rodreick hasn’t cut or combed his hair in over six years.
After his son became paralyzed, Rodreick vowed not to maintain his hair until his son is out of his wheelchair. His long, gray dreadlocks now reach the lower part of his back.
Rodreick has spent the past five years lobbying legislators to provide more funding for research on spinal cord injuries. Several attempts to secure state money for this type of research have been unsuccessful in recent years. In this spring’s legislative session, the House hasn’t proposed funding for the research.
Rodreick left his job in hospital administration to find ways he could help his son and other people living with life-altering injuries.
“I’m not the kind of person to just accept that,” he said of his son’s injury.
His son, Gabe Rodreick, suffered a severe neck injury seven years ago while vacationing in Costa Rica that left him paralyzed from the neck down. Soon after the injury, Roderick and his son traveled to India in search of medical treatment options.
“We traipsed around looking for alternatives,” Rodreick said. “It was during those times when I started to dig in to the research.”
Roderick began parsing through scientific journals and publications, completely immersing himself in studies of spinal cord injuries. His inquiries left him curious
about the current levels of research funding.
He met with health professionals and academics and asked them what more funding could do to advance spinal cord injury research in Minnesota.
He talked with Dr. Ann Parr, the director of spinal neurosurgery at the University of Minnesota.
Parr, who has overseen a research lab for four years, said a lack of consistent funding has forced her researchers to halt some of their projects.
“It is always a struggle to get funding,” she said. “Sometimes we have to shut projects down until we have the funds to start them back up.”
Parr’s lab uses specialized nerve cells to repair areas of the spinal cord that have been damaged. The goal of the research is for a patient to gain functional recovery through the use of their own cells.
Parr said recent investments have made her work possible, and with additional resources, research could continue to expand.
“There is more going on now than there ever has been, so that’s really exciting,” she said.
Rodreick said additional state funds could help advance research in Minnesota, including Parr’s.
Several attempts from state lawmakers in the last four years to allocate additional funding haven’t been approved.
This year, the Senate recommended awarding $2 million over the next two years for a spinal cord and traumatic brain injury research program.
Sen. John Hoffman, DFL-Champlin, said supporting more of the research done at higher education institutions was part of the reason it was approved.
“We have some of the greatest researchers here in our own backyard,” Hoffman said.
A separate House proposal does not include money to further spinal cord injury research.
Rep. Bud Nornes, R-Fergus Falls, said other types of research, including Alzheimer’s and other dementia diseases, took a higher priority for some legislators this year. A lack of state funding also limited the number of projects they could approve, he said.
Last summer, Rodreick helped form a nonprofit organization called Get Up Stand Up to Cure Paralysis to bring awareness to the challenges people with spinal cord injuries face. The group also advocates for creating more treatment options.
Robert Wudlick joined the organization three years ago. A rafting accident in the Grand Canyon left him a quadriplegic. Since then, he has urged state officials to prioritize spinal cord research.
“Pushing for government, state and federal funding for spinal cord research is the most effective way to get functional improvements,” he said.
Rodreick said he hopes the money lawmakers proposed this year for spinal cord injury research will help discover new innovations.
“It’s been five years; it’s time for us to win something,” he said.
Getting support from the state this year “will motivate people and get them excited about the possibilities,” he said.
Through aggressive exercise routines, Rodreick’s son has regained function in some areas of his body where improvements were said to be unlikely. If research can help his son continue with these improvements, Rodreick said, he’ll cut his hair.
“If he can partake in some treatment innovation and get his hands back, or some sort of functional improvement … Oh, I’ll cut my hair,” he said.
Delete Image
Align Left
Align Center
Align Right
Align Left
Align Center
Delete Heading