A push to sell research

Initiatives to move research out of University labs and onto shelves are growing thanks in part to a new federal grant. 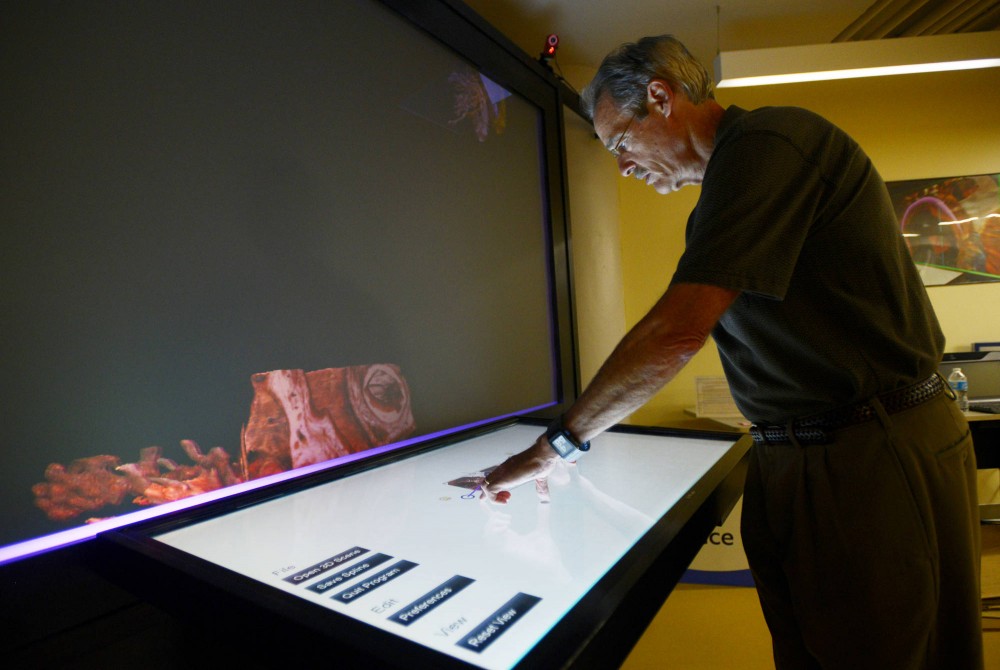 Professor Art Erdman uses the 3D Immersive Touch Table System in the Medical Devices Center in the Mayo Building on Thursday. The MDC, which uses student and faculty research to create breakthrough medical devices, is a leading center in its field.

The University of Minnesota is taking its “Driven to Discover” mantra outside of classrooms and labs by arming faculty and student researchers with new initiatives to turn their breakthroughs into businesses.

And this fall, an intensive start-up course aimed at helping science, technology, engineering and mathematics students turn their studies into business ventures received backing from the National Science Foundation for the first time.

Those efforts are supplemented by Minnesota Innovation Partnerships, or MN-IP, which is an agreement that helps existing companies license University-developed technology.

With that support, along with a growing array of courses and programs, the University is pursuing its goal of steering STEM discoveries from the lab to the market.

John Stavig, director of the Gary S. Holmes Center for Entrepreneurship, said he hopes the STEM start-up course will foster an entrepreneurial spirit in the institution’s young scientists.

“One of my big goals with the program is really to change the culture across the University, empower the students,” he said.

While many students rifled through syllabi during the first week of school, some were pitching science, technology, engineering and math-centric business ideas.

Among the projects were a robot designed to teach coding, a University-focused transportation application and a peer-to-peer advertisement site for students.

About 30 students are enrolled in the University course, which is a growing program that preps students from pioneering STEM fields for entrepreneurship.

This year, a three-year, $300,000 National Science Foundation grant will help support the class. The funding will expand the University’s Minnesota Innovation Corps, which is one of 15 Innovation Corps sites across the country.

The grant will, among other things, fund prototypes and customer marketing expenses, Stavig said.

He helped launch the class three years ago and said it appeals to STEM students by bypassing business jargon and by focusing on testing their ideas’ commercial potential.

“Too often researchers have a technology they fall in love with,” he said, “but if it doesn’t solve a problem, nobody is going to pay for it.”

Post-doctoral student Nicholas Baltes said he lacked the entrepreneurial expertise to make a business pitch out of his molecular biology research.

“What I like about this course is that it bridges the gap between science and business,” he said. “That’s something we weren’t really trained on, at least in my education.”

Baltes’ team hopes to develop genetically engineered virus-resistant plants through a patented method of transferring bacterial immune systems to plants like Cassava, a staple crop in Africa frequently plagued by disease, he said.

In the past, the course has boasted a number of successes, including 14 startup grants and five finalists in the statewide Minnesota Cup business innovation competition.

Students benefit even if a business plan proposed at the beginning of the 14-week course doesn’t pan out, Stavig said.

He cited the case of one neuroscience doctoral student who attempted to create a more efficient system for doctor-patient communication.

“She laid out a concept that made a lot of sense, but … it was never going to be realized,” Stavig said. “She actually jumped into another start-up.”

Neuroscience senior Ishan Sahu is currently pursuing a similar venture for a secure hospital communication system after he observed loved ones of patients nervously anticipating updates from waiting rooms.

Sahu said he wants to use skills he learns in the class and apply them to several other ideas, too.

“We’re going to apply it to a single idea as a guinea pig,” he said.

Since the class’s beginning, Stavig said the STEM start-up class has grown from five students gathered around a table in front of his office to a full classroom. In that time, 58 teams, comprised of the class’ students and others, have completed the course.

“It’s a great way to apply [students’] learning,” Stavig said. “They care a lot more than when they’re in their marketing class or their finance class, because they’re solving their own problems.”

Taking faculty research off the shelf, into markets

In the six years since its establishment, the Medical Devices Center, a center that allows students and faculty across fields like neurology, veterinary medicine and dentistry to create new medical devices, has generated over 150 patent disclosures.

Art Erdman, director of the center, said it draws several industry partners each year — like Medtronic and Boston Scientific — that are interested in purchasing the inventions that come out of center’s labs.

Through Minnesota Innovation Partnerships, existing industry partners like the U.S. Department of Commerce can license those University technologies.

Erdman helped create a 3-D system used to test prototypes virtually, called the “coffee table.” He said the MN-IP program helped get the product out on the market.

“Industry [partners are] really interested in working with us through MN-IP,” he said.

Since MN-IP’s creation in 2011, the Office for Technology Commercialization has crafted 123 agreements between faculty members and about 90 companies, said Rick Huebsch, OTC’s associate director of Software and Physical Sciences.

He said MN-IP keeps faculty research from sitting on a shelf.

Earlier this year, MN-IP created a new component that allows companies to test out University inventions before purchasing them.

Erdman said many researchers would rather focus on their work than the business aspect of getting it commercialized.

Huebsch said researchers appreciate MN-IP because it can speed up the transaction process, bypassing licensing paperwork that can sometimes take up to a month.

“The biggest thing we want researchers to focus on is their research,” he said.

President Eric Kaler previously told the Minnesota Daily that the University’s model for transitioning research into entrepreneurial ventures impressed members of the Norwegian Parliament in his recent trip to the country.

“They’re very interested in technology transfer and moving inventions out of the universities into the marketplace,” he said. “We excel at that at the University of Minnesota.”