Review: Welcome to the Migos show, this is “Culture II” 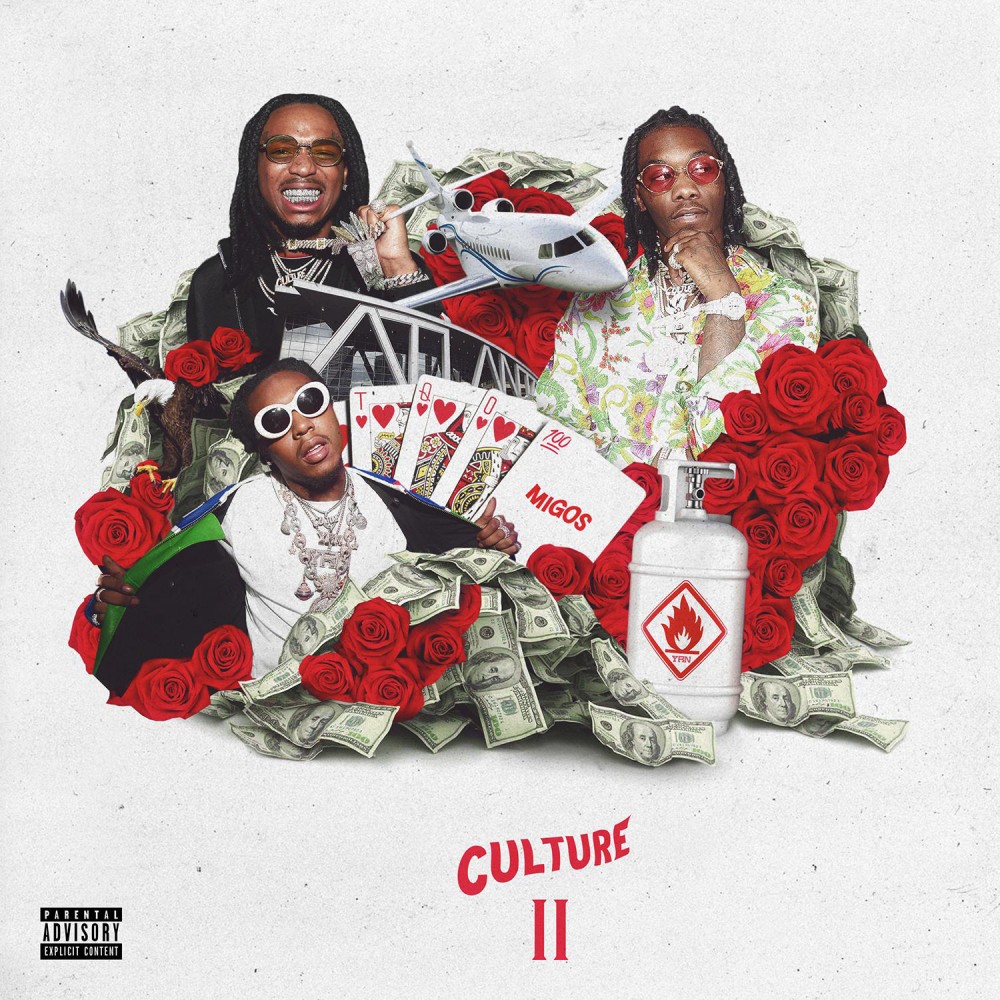 I still remember a time before everything was Migos, but only slightly. (Slightly!)

Sometime in the past … maybe year and a half (?) ago, the Lawrenceville, Georgia-based group slipped into our consciousness.

With “Culture II,” the cement of their placement dries. It no longer matters how long we can handle the word “skrrt.”

The album, Migos’ third full length venture, came out Friday  — almost exactly a year after the drop of their chart-topping “Culture.”

As suggested by the “II” in its title, the album certainly feels like a sequel, though not in a bad, “Grease 2” kind of way.

The characters and themes are the same and the flow is still smooth. Simply put, it’s more of what the people want.

With recycled beats and word choice, some songs seem almost direct descendants of past hits (see “Open it Up” from “Culture II” compared to “Deadz” from “Culture I”). Dynamics remain and — of course — ad-libs are still plentiful.

Migos comprises three rappers known by the stage names Quavo, Offset and (yes the third one has a name! But still no Wikipedia page) Takeoff. Though closely related, the group is no von Trapp family in their songwriting capability.

But trap family? That works.

Lyrics contain a lot of “gas” (weed), “shine” (diamonds) and “hoes” (women, unfortunately). Every song on the album is given an “explicit” warning on Spotify.

While repetitive, “Culture II” is never boring. Songs lead into each other seamlessly, and introductions of new sounds, like the rounded “yeah yeah yeahs” in the Spanish-edged “Narcos” and the Bob Marley sampling in “Crown the Kings,” are contenting.

The album opens with “Higher We Go – Intro,” its soft drone allowing the audience to prepare for approximately six seconds before the consistent-for-24-songs dynamic begins. “Culture II” is one hour and 46 minutes long.

And while it’s the perfect length for a quick half-marathon, it’s also great to listen to during sprints.

At its best when mixing other talent in, one quarter of the album features a feature. Included artists Post Malone, Travis Scott, Gucci Mane, Drake, Nicki Minaj, Cardi B and 2 Chainz.

Of those featured, Post Malone’s appearance in “Notice Me” may be the biggest crowd pleaser. Singing the chorus, the young artist adds some smoothness to Migos’ overlays —  a little recovery post-Cardi B and Nicki Minaj’s first collaboration.

2 Chainz is next up with “Too Playa.” While perfectly pleasant, he’s almost forgotten by the time the last three tracks are finished. The fabulous “Made Men” delightfully forgoes Don Draper mentions to display Takeoff at his finest.

“Hello world, hi,” he raps. “I would like to welcome you to the Migos show.”

“Believe me when I say we make our own sound,” Quavo says. And we do.