The Starling Project is working with community organizations to help businesses along the Central Corridor. 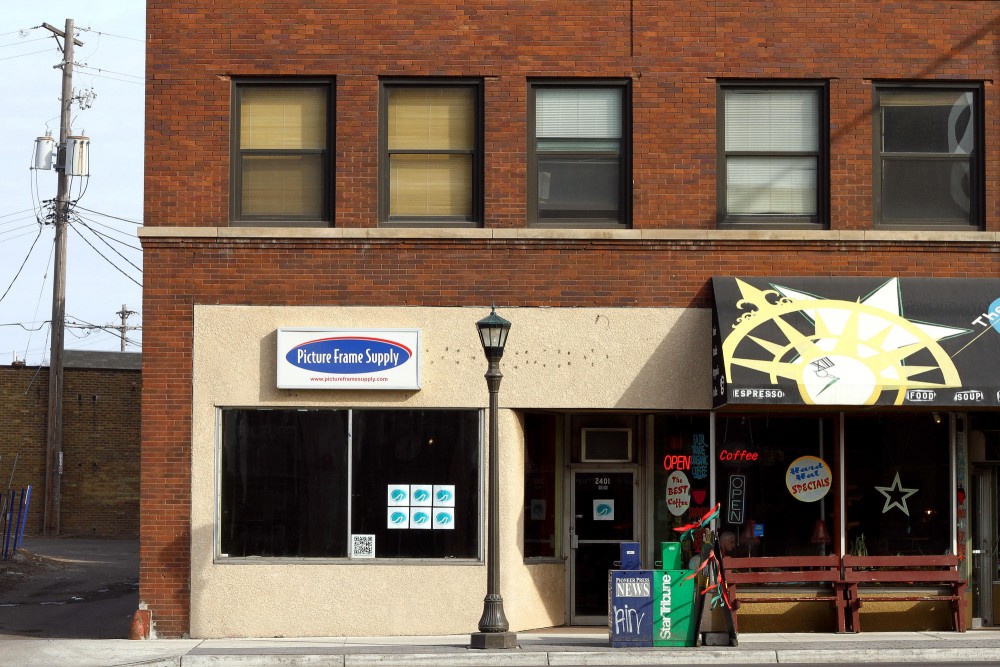 The 2401 space on University Avenue is one of the many vacant spaces along the central corridor that the Starling Project, a volunteer graduate student group, is working to fill with temporary tenants. This space is looking to be filled by an art professor at the University.

Times are tough on University Avenue in St. Paul.

But the Starling Project, a volunteer-driven organization created by a group of University of Minnesota graduate students, is working to change that.

A harsh recession paired with the construction of the Central Corridor light rail has left many storefronts collecting dust as they sit empty in the area.

Starling coordinators work as property “matchmakers,” connecting potential tenants, such as entrepreneurs, artists and community groups with property owners who are willing to rent their spaces at a deep discount on a temporary basis, Starling’s co-founder Kristen Murray said.

The project, which launched in December, hopes to benefit both parties as well as the surrounding community.

On Friday, the graduate-level class ARTS 5690: Art for the People/Art on Wheels became the Starling Project’s first tenants, Murray said. They will rent out 2401 University Ave. beginning this week.

Students will perform their midterm projects in the newly rented space by projecting their work inside the building, in the front window and on the side of the building.

“In art or any creative studies, it’s great to get out in the community, and students seem to be really responding to that kind of potential, which we couldn’t do without the space,” said the course’s instructor Jenny Schmid.

Schmid said she heard of Starling from one of her graduate students who was involved in the project.

“They’re just getting started but I like their idea that they just have this small mission to make connections between people who have space and people who need short-term space,” Schmid said.

Starling works to benefit the University Avenue community by building relationships with property owners around the western end of the corridor in St. Paul, Murray said.

Project coordinators also maintain a database of vacant storefronts on University Avenue and work with prospective tenants to match them with a space to rent.

About 40 to 50 people and organizations have contacted the group so far. Some were just curious about the project, but more than half of the individuals are “very interested in a space,” Murray said.

“People can come in a really informal, casual environment, meet property owners, see spaces and even meet other people who are maybe interested in sharing space,” Murray said of the open houses.

The Starling Project is a volunteer-based organization, and the organizers have no economic stake in the relationship between tenants and property owners, according to the project’s website.

Inspiration from outside the box

Starlings are birds that borrow existing, empty nests and “use them as their own for a while,” Murray said as she explained the inspiration for the project’s name.

The Starling Project began as the brainchild of Murray and Ben Shardlow, who are both urban and regional planning graduate students at the University.

Through an earlier experiment called “Storefront-in-a-Box” that rented out a bookstore property for a week at a time, Murray realized there were many people interested in renting a space for more than a day but less than a year.

The two began the Starling Project to use the vacancies on University Avenue between Highway 280 and Cretin-Vandalia in St. Paul as a benefit to the neighborhood during and just after light-rail construction.

A team of students in a neighborhood revitalization class at the Humphrey School of Public Affairs also helped map out a plan for the project last fall, and students from the College of Design helped with graphics.

Other students and faculty also pitched in ideas at a planning event in October, Murray said.

Teaming up for University Avenue

Starling is working together with community organizations already in the area along University Avenue, such as the St. Anthony Park Community Council, the Creative Enterprise Zone planning team, University Avenue Business Preparation Collaborative (U7) and the Aurora St. Anthony Neighborhood Development Corporation.

With the help of community partners, Starling has applied for grants and hopes to expand the project to other parts of University Avenue.

“The bare bones of the idea is that putting stuff in open storefronts is energizing and brings vitality to the corridor,” Murray said. “There are lots of ways to do that, and we’re exploring ways to do that directly with tenants and business owners but also with organizations that have already been doing a lot of planning.”

Isabel Broyld, U7 project manager, stressed that collaboration is “huge” in community projects.

Catherine Reid Day, committee chairwoman for the Creative Enterprise Zone, said the project is exciting because new tenants with fresh ideas help raise awareness of the creativity in the district.

“I think that Starling Project is extremely energetic and has a real attitude of doing and action,” Day said.

Amy Sparks, executive director of the St. Anthony Park Community Council, noted how quickly the project has gotten off the ground.

The fact that the Starling organizers are connected to the University is very helpful, Day said.

“They bring a group of students who want to learn by doing,” Day said. “And we are very open to that kind of partnership.”

The future of Starling

Starling organizers are currently focusing on short-term goals for the project because they are all in their last semester, Murray said.

The group hopes to iron out the details of the current model so the project could be picked up by another organization, Murray said.

For now, the group will keep promoting the vacant properties as space for any new ventures to take shape.

“We’re really excited that the spaces can be used by anything for anybody,” Murray said. “It’s not a program that’s targeted to artists or businesses. It’s open to anyone who has a need for space.”