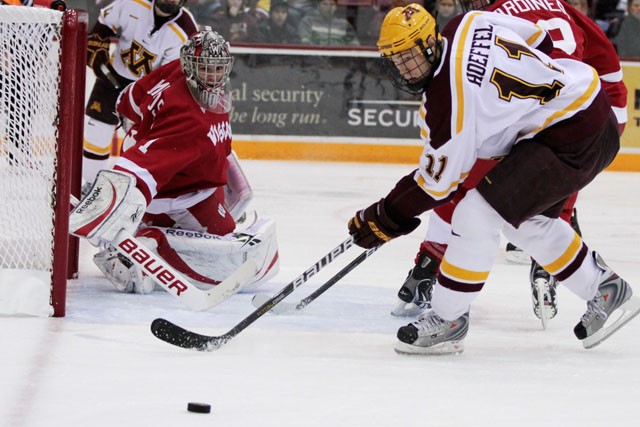 In mid-September, Penn State announced the addition of Division I menâÄôs and womenâÄôs ice hockey to its athletic slate. Thanks to an unprecedented $88 million private donation from Terry and Kim Pegula, the university will build a multi-purpose arena and the Nittany Lions will begin NCAA play in 2012.

Naturally, the upgrade from club hockey will alter the athletics pool in State College, Pa., but the effects of Penn StateâÄôs move may ripple throughout college hockey. And no weekend on the GophersâÄô schedule exemplifies that more than this one.

In any other sport, the perennial four-game spate that includes Minnesota, Wisconsin, Michigan and Michigan State would be a Big Ten brouhaha. But in hockey, the Gophers and Badgers belong to the WCHA, the Spartans and Wolverines to the CCHA. When the four come together each year during Thanksgiving weekend, each team plays both opponents from the other conference in the College Hockey Showcase.

The Showcase represents a marquee nonconference weekend, but with Penn State set to become the sixth Big Ten hockey team, itâÄôs unlikely the matchups will remain nonconference for long. Per conference rules, having six teams allows for a championship, and momentum appears to be such that Big Ten play in some form, if still a few years away, is inevitable. The Nittany Lions will play an independent Division I schedule for two years before they start playing against Big Ten teams in 2014-15, though whether they will be affiliated with the conference at that point remains to be seen.

For its part, the Big Ten has so far been essentially silent on the issue. The same day Penn State President Graham Spanier announced the schoolâÄôs intention to start a Division I program, the conference issued a short statement and has done nothing but echo it since.

âÄúThis leads to the presumption that there will be a Big Ten menâÄôs ice hockey championship at some point in the future,âÄù it read. âÄúA decision of that nature, however, cannot be made without a significant amount of discussion both internally with conference chancellors, presidents, administrators and coaches, and externally with the hockey community as a whole.

âÄúWhatever we do, we will communicate in a respectful and responsible way as we endeavor to balance all of the unique interests in play.âÄù

Among those unique interests are MinnesotaâÄôs. Its conference rivalries with the likes of Minnesota Duluth and North Dakota are among the most competitive and antagonistic in the country but might be jeopardized by the GophersâÄô departure from the WCHA.

In addition, the WCHA is widely considered the best conference in the country, especially after adding Bemidji State and Nebraska Omaha âÄî which has rapidly climbed to No. 4 in the polls âÄî this year. A Big Ten league or championship, at least at its outset, would be decidedly less competitive.

The possibility remains, however, that the Nittany LionsâÄô foray into Division I hockey will prove a tipping point, and the remaining Big Ten schools (Illinois, Indiana, Northwestern, Purdue and Nebraska starting in 2011) will follow them in forming an NCAA-sanctioned program.

How soon and whether they actually will follow Penn StateâÄôs lead is still unkown, so the College Hockey Showcase remains one of the best nonconference weekends of the season and nothing more.

Senior winger Mike Hoeffel more than doubled his season goal total in MinnesotaâÄôs sweep of Michigan Tech last weekend, and for his efforts he became the third Gophers skater this season to earn WCHA offensive player of the week.

Hoeffel scored four times and added an assist in two games at John MacInnes Student Ice Arena, the venue he said before the season was his favorite place to play away from home. It also seems the Huskies are his favorite team to face; in his last four games against them, Hoeffel has six goals and a pair of game-winning assists.