Third-ranked Minnesota will face Minnesota-Duluth, the team that ended the Gophers’ season just a year ago. 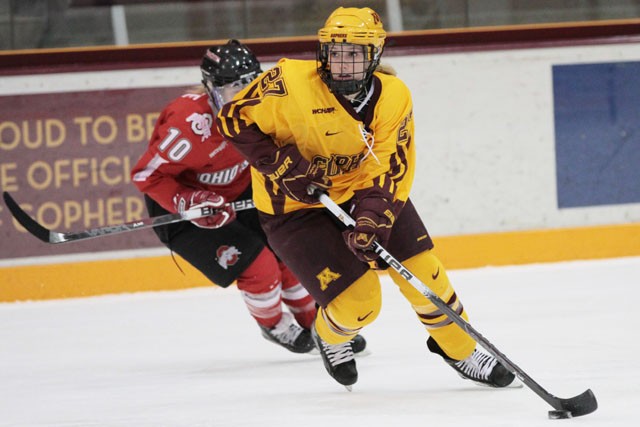 Minnesota freshman Amanda Kessel admitted her team was getting a little nervous late in SaturdayâÄôs game against Ohio State.

Kessel intercepted a pass with a little more than four minutes left in the third period and raced forward on a breakaway. She deked Ohio State goaltender Lisa Steffes to the right and put in a backhand game-winner at 16:51 in the final frame.

Kessel is the leading scorer on the Gophers this year with 45 points and came up big in the clutch.

âÄúI just saw the puck loose, and I missed a breakaway earlier so it was nice to put it in,âÄù Kessel said.

With this 3-2 victory Saturday paired with a 4-2 win in the opening game of the WCHA playoffs Friday, the third-ranked Gophers advanced and will face rival Minnesota-Duluth in the semifinals of the Final Faceoff.

Minnesota got the fast start it was looking for 2:10 into the series with a Kelly Seeler goal.

Jen Schoullis added a power-play goal to put the Gophers up 2-0 as the first period came to a close.

Minnesota dominated the Buckeyes in the first, outshooting them 17-6.

It looked like Minnesota (25-8-2, 18-8-2) was poised to put the game away midway through the second period following a pair of goals by Sarah Erickson and another power-play goal by Schoullis.

But Ohio State roared back into the game with a two-goals-in-33-seconds flurry by Laura McIntosh.

Schoullis was called for slashing immediately following McIntoshâÄôs second goal, putting the Buckeyes on the power play for the ensuing faceoff.

Ohio State had all the momentum at that point, but the Gophers penalty kill came up big following the Schoullis penalty, as it had all night.

The BuckeyesâÄô rush came up short, as McIntoshâÄôs two goals would be the last of the night for either team.

Minnesota jumped out to an early lead again in SaturdayâÄôs game.

Erickson took a pass from Kessel between the circles and netted a goal 10:48 into the first.

It was EricksonâÄôs 100th career point, a feat only 17 other Gophers have accomplished.

âÄúI guess it feels pretty good,âÄù Erickson said. âÄúI like to win more than I like to score, so as long as weâÄôre winning, IâÄôm fine with that.âÄù

Barely a minute later Minnesota was on the attack again.

Sarah Davis converted on a power play with a goal as she dove to the ice.

It was the 10th goal of the season for the freshman and the first postseason goal of her career.

Ohio State made a push in the second period and early in the third with goals by Paige Semenza and Shannon Reilly, tying the game at two.

This led way to KesselâÄôs late heroics, and the Gophers ultimately triumphed.

âÄúWe played pretty well there I thought,âÄù head coach Brad Frost said. âÄúOverall I thought it was a pretty gutty effort. It wasnâÄôt pretty, but in the playoffs, generally, itâÄôs not going to be.âÄù

When Minnesota opens up its series against UMD next weekend, they will be focused but will have a much larger goal in mind.

âÄúOur class and the senior class are hungrier than we have ever been,âÄù Erickson said. âÄúWe want that national championship. ThatâÄôs what weâÄôre going for âÄî thatâÄôs our goal âÄî hands down. [The] WCHA, we would like to win it, but were looking for the big one.âÄù