Fashion on the fringe

U of M clothing design seniors prepare for their gritty runway finale, “Distortion.” 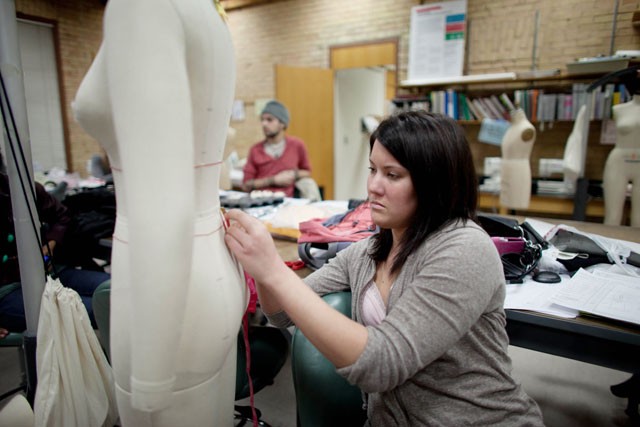 Fashion design senior Jessica George measures the waist of a mannequin Monday at the McNeal Center in St Paul.

WHAT: U of M Senior Fashion Show, âÄúDistortionâÄù

Move over, Carlson. Believe it or not, the clothing design program is one of the most competitive programs offered at the University of Minnesota.

Designer hopefuls begin their freshman year as a pre-major, taking limited program courses only to be reviewed by a panel at the end of the year when the class size is drastically cut to 18.

For those who survive the elimination round, life as they once knew it is over and the eager students embark on the rigorous three-year journey that is clothing design school. The culmination of their hard work has all built up to the moment when theyâÄôll show their senior lines at âÄúDistortion,âÄù the senior fashion show.

âÄúWe look at our class as being a little more offbeat and in-your-face,âÄù senior clothing design major Amanda Matrejek said.

âÄúWe definitely didnâÄôt want to have a theme that was super inspirational,âÄù senior clothing design major Elise Diebel said. âÄúWeâÄôre all a little dark and a little cynical.âÄù

The students conceive the themes as a class, and âÄúDistortionâÄù most fits the aesthetic and attitude that they hope to project to the design world.

The production itself is completely student-run, which, when all is said and done, is a heck of a lot of work. In addition to actually designing and sewing the four to five looks that are meant to manifest everything theyâÄôve learned in the past four years of academia (kind of like a thesis), the students must also piece together an entire evening of entertainment for the viewers who come to support their sartorial glory.

This means securing a venue, contracting models, makeup and hair, coordinating the runway soundtrack with a DJ, fundraising, selling tickets and, in traditional fashion-scene manner, figuring out where to throw the afterparty, all in addition to promoting the very work thatâÄôs depriving them of sleep.

ThereâÄôs no question that the students love what theyâÄôre doing; the question is how will this love manifest in the hot looks we see on the runway? This year, the showings are looking to be fairly diverse. From the refined menswear of Kelly Ver Duin to the modern-apocalyptic flash of Niki English to the ambitious lingerie line coming from Alix Nettnay, itâÄôs clear that show-goers are in for a full spectrum of fashionâÄôs finest.

Though the completion of the senior show will undoubtedly foster a sense of accomplishment among the young designers and will certainly be a load off their shoulders, itâÄôs also a sentimental ending to a bond with classmates. Post-graduation, itâÄôs inevitable that some will heed the seductive siren-song of New York, others will try their luck within the Twin Cities developing their lines, some may end up in commercial design jobs and others still may find themselves amidst careers outside of the fashion industry entirely.

Whether the future carries them to the runways of New York fashion week or to a boutique down the block, âÄúDistortionâÄù marks an integral step for the earnest graduates.