University of Minnesota College of Design alumna is making her name as a freelance graphic designer and art director. 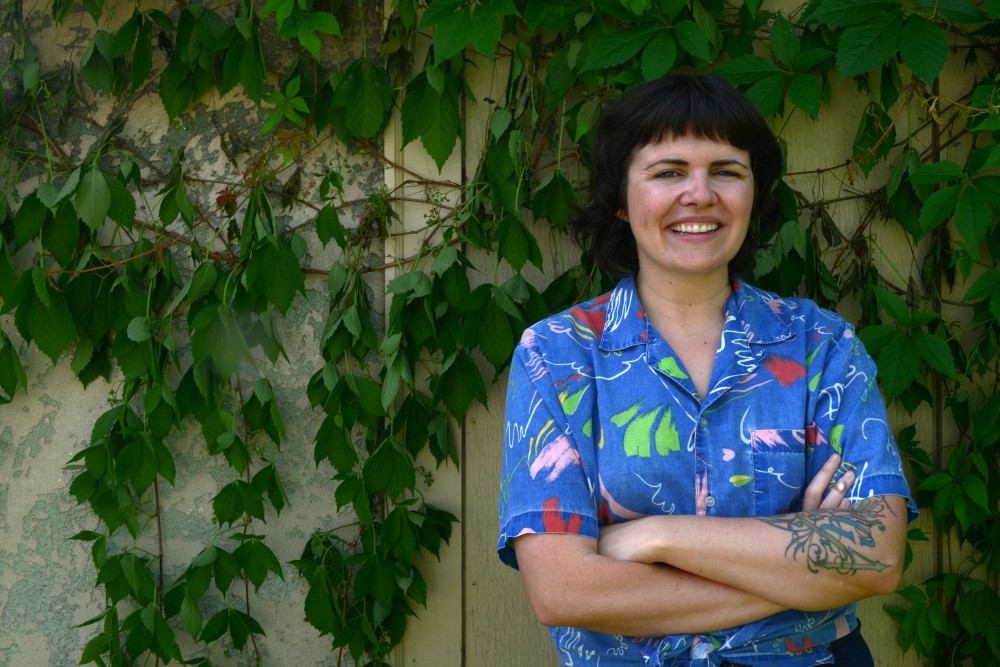 Graphic design alumna Chelsea Brink poses for a portrait outside her Northeast Minneapolis apartment Wednesday, June 7, 2017. Brink, who is a freelance designer and art director for brands like Bad Larry's Cold Hard Coffee, does most of her work from home.

In a heated February exchange, Senate Majority Leader Mitch McConnell enacted a vote to silence Sen. Elizabeth Warren. His explanation for the move soon became a mantra: “Nevertheless, she persisted.”

The two would go on to host a fundraising party at the Brass Knuckle, an Uptown tattoo shop, where they sold tattoos Brink designed that said “she persisted” or “nevertheless, she persisted” to benefit Women Winning, a political advocacy organization dedicated to getting pro-abortion rights women into politics.

It was supposed to be a private event on Facebook for other close friends, but they unknowingly made the event public.

“All of a sudden there were literally thousands of people interested in the event and, like, 300 people confirmed,” Brink said.

The event raised over $4,000, with a small amount going to the shop. It led Brink to design clothing with the same slogans and give proceeds to nonprofits.

A ‘lightbulb’ moment at the University

Today, Brink works as a freelance graphic designer and art director for different agencies. But almost fifteen years ago, she was living in Moorhead, Minnesota and was entering the University to study interior design.

Interior design wasn’t what Brink thought it would be, and she said she moved to graphic design because “it fit.”

At the University, Brink said a guest lecturer in her junior year changed her outlook. The lecturer told a story of when his girlfriend wanted him to join her at the bars on a Saturday night. He refused and worked instead.

“That was my full lightbulb moment,” Brink said.

While at the University, her professors praised Brink as a model student.

Daniel Jasper, an associate professor in the graphic design program who taught Brink, said she was “kind of a dream student.”

Jasper brought in practical projects for his class, like designing posters for Radio K. Brink always came with many creative ideas.

“It doesn’t surprise me that she has these self-directed projects that take on current issues,” Jasper said.

Greg Pickman, Brink’s former professor, invited her to speak to his classes about graphic design careers.

“[She’s] very hard working and talented,” Pickman said. “She’s a good role model of what it takes to make it in the professional industry.”

When thinking of design programs in Minneapolis, Brink said the University doesn’t come to mind at first. Often, design professionals assume she went the Minneapolis College of Art and Design.

But Brink said going to a school with so many different people and majors was a boon for her career.

“That teaches you a lot about the world in general and being around people who are different,” she said.

Since graduating, Brink has worked on a variety of projects in Philadelphia, Los Angeles and Minneapolis. Her work led to creating, branding and packaging for Bad Larry’s cold hard coffee, designing for West Bank restaurant Republic and advertising campaigns for the University of California, Los Angeles.

Throughout her career, Brink has worked pro bono as creative director for McInerny’s nonprofit, Still Kickin, which raises funds for those in need.

McInerny said she and Brink work well together, and it has shown in their work at Still Kickin, and in their wildly successful “nevertheless, she persisted” campaign.

In the months since the tattoo fundraising event, Brink received requests for the design across the globe — from Belgium to Amsterdam to New Zealand.

As a response, Brink said she’s put the design on her website for use, and asks that people who use it donate to a cause of their choice.

Brink also extended the design to clothing, profits from which have totaled over $7,000 towards three women-empowering organizations: She Should Run, The Malala Fund and The National Women’s Law Center.

“It’s kind of overwhelming, it’s one of those things that’s really hard to process,” Brink said. “But seeing the profound impact that it’s made and the amount of money that we’ve raised is pretty incredible.”