Two new members and two incumbents will serve six-year terms on the board. 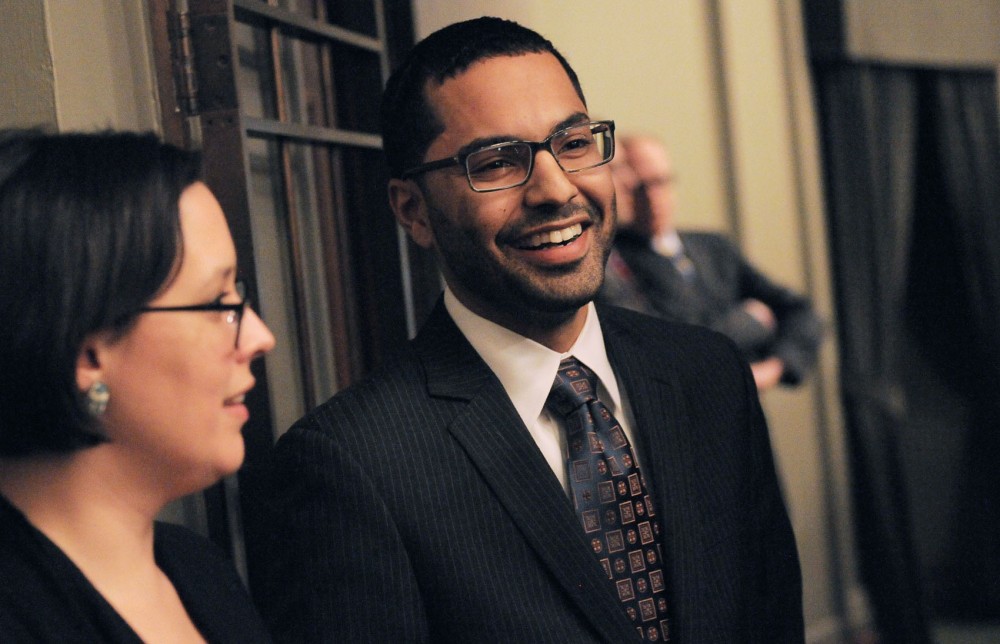 Abdul Omari speaks with current student representative at-large Maureen Ramirez after being selected to be the new student regent position on the board on Wednesday, March 6, 2013, at the State Capitol.

The state Legislature appointed two new members and two incumbents to the University of Minnesota’s Board of Regents on Wednesday night.

In a joint meeting of the House and Senate, legislators selected incumbents Linda Cohen and Dean Johnson, and newcomers Abdul Omari and Peggy Lucas to serve six-year terms on the school’s highest governing body.

All four were selected last week by a joint higher education committee and won Wednesday night with majorities in the first rounds of voting.

The nominees join eight others on the University’s 12-member board that sets policies and budgets for the entire University system.

Omari was selected to fill the at-large position reserved for a University student, beating out Chris Tastad and Drew Coveyou.

After the results were announced, Omari was speechless. He moved about the House viewing gallery, hugging his friends and family and shaking hands with Tastad, and his predecessor Ramirez.

“I don’t really have words yet,” he said. “Congratulations to Chris [Tastad.] He made me the best candidate I could be, and he’s really awesome.”

The nominee is a third-year doctoral student studying international and comparative development education at the Humphrey School of Public Affairs.

Omari, a Minneapolis native who earned his bachelor’s and Master’s degrees at the University, has said he wants to diversify the school and make it more affordable.

“It’s really important to find ways to grab as much of the talent in the state as possible and really find pipelines to grab minority students in the state,” he previously told the Daily. “That’s definitely something [the University] needs to find interesting ways to do.”

After they adjourned, Tastad stood outside the House chamber, waiting to shake hands with those legislators who had supported him.

“I worked hard, and I feel like I gave it all, even though it didn’t go my way,” he said.

The student at-large vote was close.

“There was a clear level of bipartisanship in the student race,” Tastad said. “I think they dug in and considered our candidacy on merit and what we bring to the table.”

Lucas was appointed to represent the 5th congressional district, which includes most of Hennepin County and the University.

Last week, she faced a tight recommendation battle against Dennis Nguyen, chairman and co-founder of New Asia Partners and a Minneapolis resident.

The committee was split on who to recommend. After two hours, they chose Lucas.

She waved to the Legislature after the votes were tallied and her victory was announced.

“I am truly overwhelmed,” Lucas said. “I feel exhausted in a way, but I am very energized.”

Lucas replaces Hung, who was originally elected as a student for her district’s seat and decided not to run for a second term.

Lucas is the founder of Brighton Development Corporation, an urban housing and redevelopment firm in the Twin Cities, according to the Humphrey School’s website.

Lucas formerly served as the national director of the League of Women Voters, on the University of Minnesota Foundation board and got her bachelor’s and master’s degrees from the University.

Incumbents Cohen and Johnson, who were chosen over opponents Kelly Smith and Ertugrul Tuzcu, will be returning to their at-large positions on the Board.

Johnson served a state legislator for nearly 30 years before being appointed to the board in 2007.

Cohen, the board chair, has stressed affordability at the University and cutting administrative costs.

Ramirez, the most recent student to serve on the Board of Regents, said she’s happy about the candidates but is ready to move on.

“That’ll be it for me,” she said. “It’s a relief not to be in the race, but I’m still interested with what happens at the University.”

Rep. Ron Erhardt, DFL-Edina, voted with all of the higher education committee’s recommendations.

“I trust the slate. If you’re going to vote as a caucus, you stick together. You have to have some confidence in what others can do.”