Kent Patterson did not allow a goal in the series. 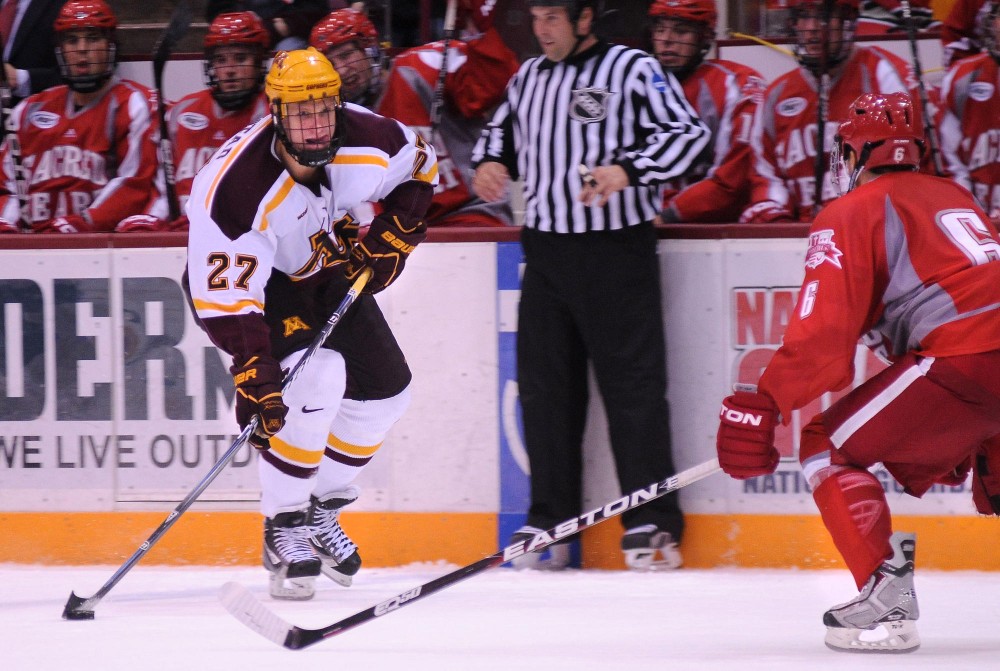 The Gophers menâÄôs hockey team came into the weekend and started its season off on the right foot.

By dominating in a sweep of Sacred Heart, Minnesota (2-0-0) erased some bitter tastes from seven months ago, when it was swept by Alaska-Anchorage to abruptly end its 2010-11 season.

It was a weekend of firsts for the young team.

Four freshmen scored the first goal of their career, other veterans scored their first goal on the season, and senior Kent Patterson recorded his first and second career shutouts.

All these firsts culminated with a 9-0 drubbing of the Pioneers on Friday and a 6-0 pummeling Saturday.

âÄúWe have a young team,âÄù head coach Don Lucia said. âÄúI think [this series] helps from a standpoint that a lot of guys scored their first goal.

âÄúZach Budish had his first goal after a long rehab and missing last season, so from that standpoint I think it was good for us.âÄù

Budish missed a bulk of last season after a multitude of injuries, including a mo-ped crash that forced him to undergo season-ending knee surgery.

No. 19 Minnesota didnâÄôt waste any time netting the inaugural goal of the season and never looked back.

Highly touted freshman Kyle Rau, whom Lucia called âÄúfearless,âÄù picked up this season right where he left off last spring when he scored the game-winning goal for Eden Prairie in the Class 2A state championship.

Rau fought to keep a puck in the zone and centered it to Nick Bjugstad. Bjugstad shot wide of the net, but Rau was there to pound it in as the puck floated around in the crease.

It was his first career goal and it came 56 seconds into his Gophers tenure.

âÄúItâÄôs no big surprise that [Rau] scored the first goal of the season and where he did it âÄî right at the blue paint,âÄù Lucia said.

âÄúI definitely think they will contribute all season,âÄù Bjugstad said of the freshmen.

âÄúWe have a lot of freshmen, so I definitely think weâÄôre going to have to look upon those guys.âÄù

Though it was Rau who got things started for the Gophers, Warning had a larger impact in the series playing on a line with Erik Haula and Jake Hansen.

That trio comprised the second line and seemed to make plays every time they stepped on the ice.

Minnesota dominated nearly every facet of the game Friday as seven different players scored on the night and all four lines tallied a goal.

The Gophers completed the weekend sweep of Sacred Heart (0-2-0) Saturday with a 6-0 victory at Mariucci Arena.

Though it paled in comparison to the 9-0 drubbing Minnesota dished out on Friday, the team seemed to fire on all cylinders in its first two games of the season.

âÄúI liked the fact that we seemed to get stronger as the games went on,âÄù Lucia said. âÄúI think thatâÄôs a good sign that weâÄôre in pretty good shape, but itâÄôs the first weekend of the year.âÄù

MinnesotaâÄôs power play, however, went just 3-for-13 in the series, and failed to score on a 5-on-3 opportunity Saturday.

Lucia said he liked the play of his goaltender against Sacred Heart and said he realizes that Patterson will have to be the âÄúbackboneâÄù of a team with no senior defensemen.

Patterson said he was satisfied with how his youthful defense played this weekend.

âÄúI was most impressed with our backcheck âÄî our hustle coming back to the zone,âÄù Patterson said. âÄúThat was a big improvement from the team last year and I think it definitely showed out there.âÄù

Patterson, who made 40 saves in total to record back-to-back shutouts, said the team must now shift its focus to Minnesota-Duluth next weekend.

Added Lucia: âÄúWe know weâÄôre going to play a better opponent next week, but I think it was good for us to have these games to hopefully gain some confidence and know that we can do some things too out on the ice.âÄù