Although Minnesota had two ranked opponents to face this weekend, it emerged 1-1. 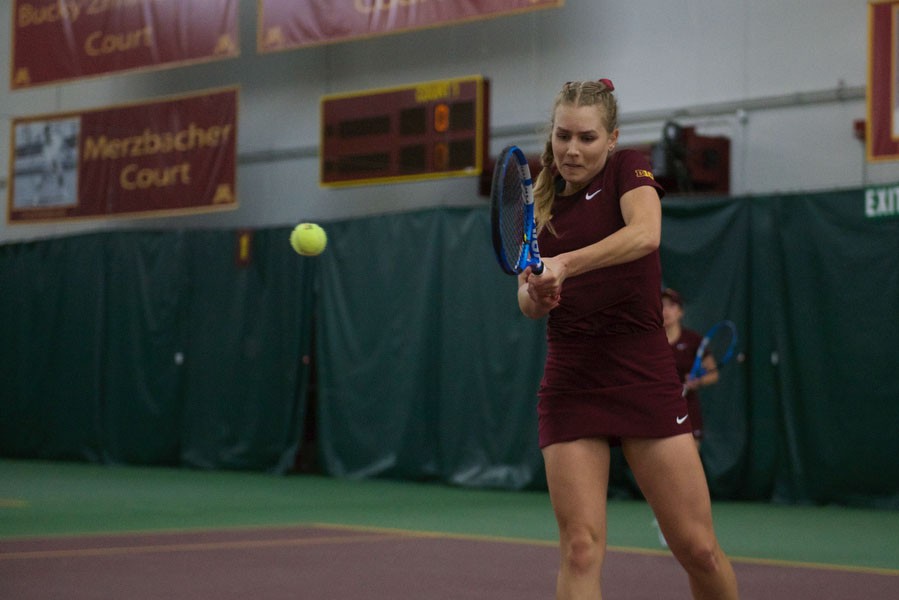 The Gophers’ women’s tennis team knew this weekend would be a challenging one as they prepared to take on No. 29 Northwestern and No. 34 Illinois.

Minnesota came prepared and battled all the way back from a 3-1 deficit to upset the Wildcats and put the Gophers back into the win column for the first time in two weeks.

“We knew this weekend that we were going to have two tough battles and in order to win we would have to play some of our best tennis,” head coach Catrina Thompson said.

Momentum began to swing in favor of the Gophers when senior Caitlyn Merzbacher got them on the board as the No. 4 singles player, winning 6-3, 6-3. From there the dominoes began to fall, and Northwestern left Minneapolis without the elusive fourth point as Minnesota stole the upset victory.

The Gophers’ River Hart, in the No. 5 singles spot, followed suit. Hart battled back like her team after dropping the first game and forced a third set in her match. Hart dominated from there and won: 3-6, 6-3 and 6-1.

No. 1 singles player Tina Kreinis was paired up against the Wildcats’ Clarissa Hand, ranked 39th in the nation in singles. Although Hand dominated the opening set, winning 6-3, it was Kreinis who had the last laugh.

“I looked at my teammates across the board and saw them competing and winning, and it inspired me,” Kreinis said.

Kreinis answered in the second set by not allowing a single point, forcing a third set and keeping her eyes on the prize. Kreinis upset Hand: 3-6, 6-0 and 6-3.

“I was super excited to get that win, and it gave me an opportunity to see how much I can achieve, which is great to carry into other matches because you can feel like you can get out of any situation when you win like that,” Kreinis said.

The win at No. 1 tied the match up at three while Camila Vargas was still battling at the No. 6 singles spot.

Vargas won in two sets and solidified a 4-3 upset over No. 29 Northwestern.

“Just confidence-wise for the girls, for them to know that they can go out and battle with any team in the country, is just a huge confidence boost,” Thompson said. “Honestly, couldn’t be prouder of the girls.”

On Sunday, the Gophers looked to carry the momentum from Friday as they took on No. 34 Illinois.

Just like on Friday, Minnesota fell down early when they lost the doubles point. Solid play from the team’s singles made the match competitive but was not enough as the Fighting Illini topped the Gophers 6-1.

Junior Tiffany Huber was the first player to finish their singles match and won in two sets: 6-2 and 6-4. Huber was the only Gophers’ player to add points against Illinois.

Even though the match’s results on Sunday were not ideal for Minnesota, Thompson said there were plenty of learning opportunities over the weekend.

“I think we did a much better job when things weren’t going our way in making adjustments to stay in the match and give ourselves opportunities to win the match, so if we keep doing that and playing discipline tennis, we’ll see this type of success,” Thompson said.