The Gophers have six wrestlers that are seeded in the conference event. 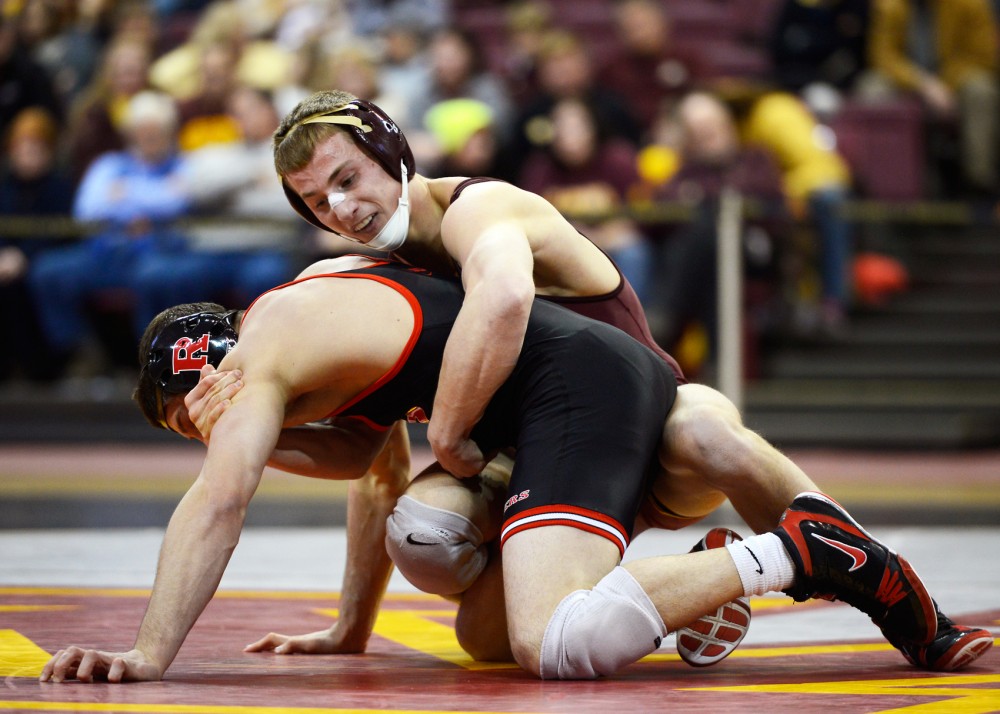 Tommy Thorn contends against Rutgers wrestler Anthony Ashnault in the 141-pound matchup at the Sports Pavilion on Jan. 17.

Jack White
For the first time in years, No. 16 Minnesota will enter into the Big Ten championships as a large underdog.
The Gophers have finished in the top three in the conference meet the last six seasons, but this year’s team isn’t expected to do the same. Seven Big Ten teams are ranked higher than Minnesota heading into the competition, which begins on Saturday.
Instead of being at the forefront, the team will attempt to surprise people this year.
“Different guys in our lineups have had more success than others, so that probably gives them more confidence,” head assistant coach Brandon Eggum said. “Regardless [of] whether you’re the No. 1-seeded guy in the Big Ten or a lower-ranked guy, you know every match is going to be a tough one.”
Six Minnesota wrestlers were seeded in their weight class in the tournament. Seeds are given to the top eight wrestlers in each weight class, except for 133 and 174 pounds, where 14 wrestlers are seeded this year.
Redshirt freshman Tommy Thorn at 141 pounds and redshirt junior Brett Pfarr at 197 pounds each earned the No. 2 seed in their respective weight class.
“That’s one of the biggest things about going to a Big Ten school. It’s such a tough tournament,” Thorn said. “It will be great [for my] first Big Tens [to] go there, get my first experience. And then nationals will be one more step up, which will be good.”
Redshirt junior Michael Kroells earned the next-highest seed on the team as the fifth-ranked heavyweight wrestler.
Redshirt sophomore Nick Wanzek is the seventh-seeded wrestler at 174 pounds and enters the tournament on a four-match winning streak.
Redshirt sophomore Jake Short is ranked eighth at 149 pounds and also enters the tournament with some momentum after pinning his last opponent in the regular season.
“I’ve been ranked all over the place this year,” Short said. “It’s actually kind of funny. I’ve lost to guys who aren’t very good, and then I’ve beat some of the top guys in the country. And, I mean, there’s no pressure on me whatsoever. [I’ll] just go out there and do what I got to do.”
Redshirt junior Sam Brancale, who earned the No. 14 seed at 133 pounds, is the final seeded Minnesota wrestler.
Brancale is one of several Gophers wrestlers who will make their Big Ten championships debut over the weekend, as Pfarr and Kroells are the only returning starters from last year’s competition.
“The big thing is try to make sure they understand to do the things that have won for them in the past,” Eggum said. “You can use anxiety and stress and all those things to your benefit. Anytime you come down to the end of the season like [the] postseason, Big Ten Championships, national championships, there’s always more pressure on the line.”
Delete Image
Align Left
Align Center
Align Right
Align Left
Align Center
Delete Heading