Wolverines take down Gophers at home

Minnesota couldn't pull off the home victory versus Michigan. 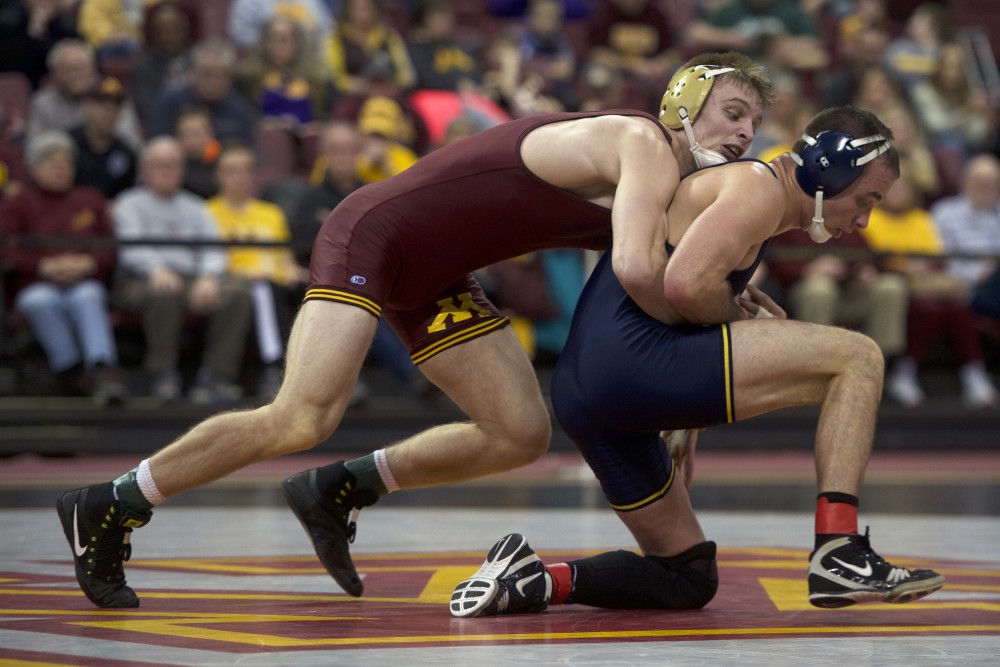 Senior Nick Wanzek at 165 wrestles with No. 5 Logan Massa during the dual against Michigan on Sunday. The Gophers lost to Michigan, their first loss of the season.

The Gophers efforts to make a statement against the higher-ranked Wolverines fell short on Sunday.

“As a team, there were some opportunities that we missed,” redshirt senior Nick Wanzek said. “We were in a lot of matches, [but] we just let [the matches] get away. We wrestled too much in their positions and there were just a lot of little things that we could have been better at.”

Wanzek fell behind 6-2 in the first period. He managed to work his way back with a strong performance in the second period to take a 10-7 lead heading into the final period. Maturi Pavilion erupted when Wanzek earned an apparent major decision, before a Michigan challenge took away two points from Wanzek and changed the victory to 14-8.

“As far as my performance, I thought I wrestled well,” Wanzek said. “I gave up some first period take downs, but that kid has been injured and I think he was doubting himself a little bit. So I knew in the third period, if I could keep it close and keep the pressure on him, he was going to break eventually.”

Though Wanzek found success in his match, other Minnesota wrestlers struggled throughout the dual.

The match at 125 summed up the Gophers day quite well. No. 4 Ethan Lizak was upset by No. 13 Drew Mattin. Lizak was leading in the third period before Mattin tied it to force overtime. Lizak lost 4-2 after the overtime period. It was one of many missed opportunities for the Gophers.

“As always, when you lose the close ones, it gets really frustrating,” head coach Brandon Eggum said. “We had opportunities at [149 and 157] to win those matches. … We talk about that all the time, and I think we let a couple of those matches get away.”

There weren’t many positives for Minnesota on Sunday. They now have to regroup and take on No. 1 Penn State on Friday.