Starting the year off right at home 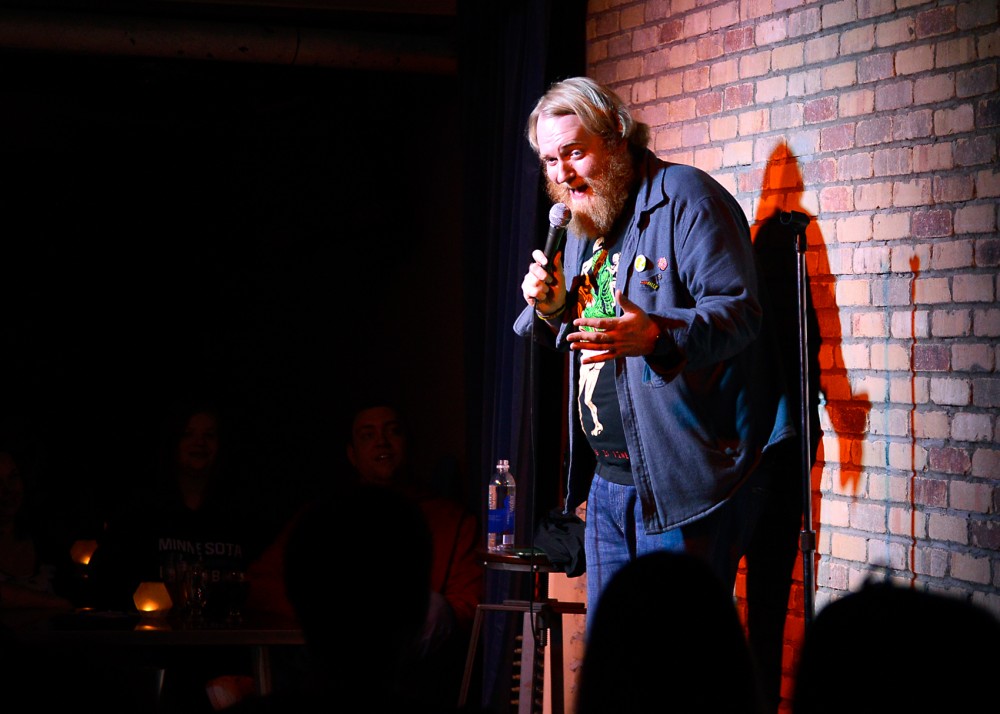 Austen Macalus
Even though he just quit his day job, comedian Adam Quesnell couldn’t be happier.
As he presented his future plans — getting married, settling down in Minneapolis, planning his next stand-up album and touring the Midwest — a huge grin broke out of his blonde beard.
To start his jam-packed year, Quesnell will be performing what he jokes are “the first headlining gigs of my joblessness.”
This Friday and Saturday night, Quesnell is headlining three shows at the Comedy Corner Underground on West Bank.
The series comes just a week after Quesnell opened for national headliner Julian McCullough at the newly renovated Sisyphus Brewing.
Although now ingrained in the Minneapolis scene, Quesnell got his start performing comedy up north.
“I started in Fargo [at] the end of 2009 doing open mics,” Quesnell said. “[Fargo] is this great little comic-run scene, and I loved it.”
However, with limited opportunities to expand his skills, Quesnell made frequent trips to Minneapolis and permanently moved to the city last October.
“Down here, you can get on stage multiple times every night,” Quesnell said. “There’s just so many really good comics at all different kinds of levels.”
After releasing his first album in 2014, Quesnell is focused on writing entirely new material.
“What I am doing at Comedy Corner Underground is a big skeleton draft. I want to use these shows to figure out what to cut from all this new material,” Quesnell said.
In the past, Quesnell’s dark but digestible comedy has touched on the exploitations of the diamond industry, social anxiety and the sad reasons he orders sandwiches online.
“I just want to be an amicable sad person,” he said. “I try to amp up who I am — someone who is trying to find what’s funny in dark things. Ultimately that’s the goal: to be able to talk about darker, weirder, stranger topics.”
This is evident in Quesnell’s personal style, which features keshi-stye figurine merchandise and psychedelic mythical T-shirts. Even his album title, “Can We Afford This Much Despair?” conveys Quesnell affinity for gloomy strangeness.
“I don’t write and can’t write political comedy, so when I do stuff about an ‘issue,’ I try to approach it from a human point of view,” Quesnell said.
Still, he said, most of his jokes start off by pushing the envelope a little too much.
“Really, it’s doing it a bunch of times and finding what people connect to and what’s too far,” Quesnell said. “Your attitude can get you away with saying a lot of stuff … It’s getting to the parts of people’s brains behind whatever they want to try and filter out.”
So far, his method seems to be working.
Ben Katzner, who will host this weekend’s shows, is familiar with Quesnell’s style after performing with him at local showcases and open mics.
“Honestly, he is probably one of the funniest people here,” Katzner said. “His delivery is super unique. He is a very smart guy, and he just combines all this stuff together to make a really unique brand of comedy.”
Like Quesnell, Katzner got into comedy outside the cities, performing in St. Cloud, Minn., for almost a year.
Both comedians recognized the benefit of performing in Minneapolis.
“There is just so much going on in town,” Quesnell said. “I feel like I just fell into the absolute perfect scene for me.”
Adam Quesnell
Where Comedy Corner Underground, 1501 S. Washington Ave., Minneapolis
When 8 p.m. Friday, 8 p.m. and 10 p.m. Saturday
Cost $10
Ages 18+
Delete Image
Align Left
Align Center
Align Right
Align Left
Align Center
Delete Heading