The team is still without a win as they lost to the nationally-ranked Cavaliers Sunday morning. 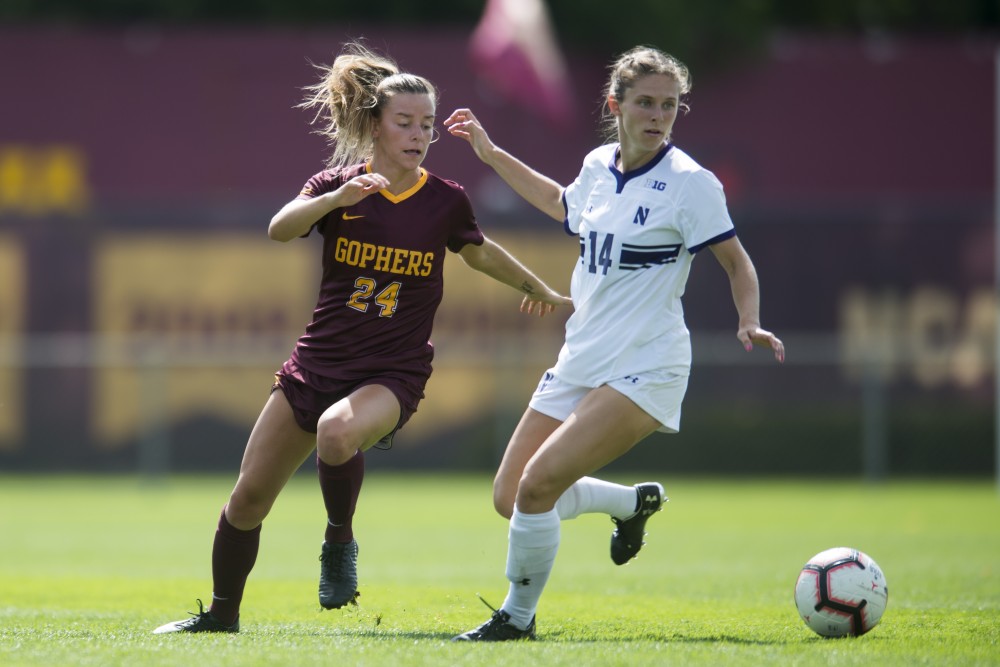 After falling to Marquette in their home opener, Minnesota soccer was still looking for their first win of the season on Sunday, but they were unable to secure it against fifth-ranked Virginia, losing 0-2 in regulation.

Gophers defense worked hard through a first half full of chances from a strong Virginia team, having to guard against five shots and three corner kicks within the first 15 minutes of play. Key plays like a tackle from defender Athena Kuehn at the 12-minute mark kept the Cavaliers scoreless through the first half.

“Going in, we just want to make sure the defense is super organized and closing the gaps and just covering underneath each other. We did a really, really good job of that the whole first 45 minutes,” senior defender Marisa Windingstad said, adding that they continued preventing dangerous chances into the second half, and while they were scored on, this game was the team’s best defensive performance in the season so far.

The the Gophers are the only team this season to have held No. 5 Virginia to zero goals in the first half.

“They’re a team that can legitimately compete for a national championship and they’ve been scoring in droves against teams,” Gophers head coach Stefanie Golan said. “Virginia is a team that loves to attack in the wide spaces, they’re looking to get opportunities from inside the 18. We said if week can limit those, we put ourselves in a position to stand a chance.”

The Cavaliers were relentless on the offense throughout the game, making 23 shots, seven of which were on goal. Minnesota goalkeeper Maddie Neilson made saves on every shot until the minute 78, as Virginia’s Ashlynn Serepca put one past her, getting an assist from Taryn Torres. After scoring their first goal, Virginia made several player substitutions and were able to pad their lead with seven minutes remaining in the game. Cavaliers senior Meghan McCool scored at minute 83, assisted by redshirt junior Anna Sumpter.

Although the offense has struggled to put up goals early in the season and had just one shot against the Cavaliers, Golan said that playing a team like Virginia doesn’t allow for many chances. She compared the game to the team’s 0-1 loss to Marquette.

“You’re going to have to be opportunistic and take advantage of the chances you do create,” Golan said. “If you look back to our game against Marquette, we were still putting ourselves in positions to win the game and creating a lot of opportunities. We just have to continue to push forward and at some point we really truly believe it’s going to fall our way. ”

The Gophers will return home to Elizabeth Lyle Robbie Stadium to face NC State on Thursday, Sept. 12 at 7 p.m.