Shunned by College Gameday, Gophers focused on task at hand 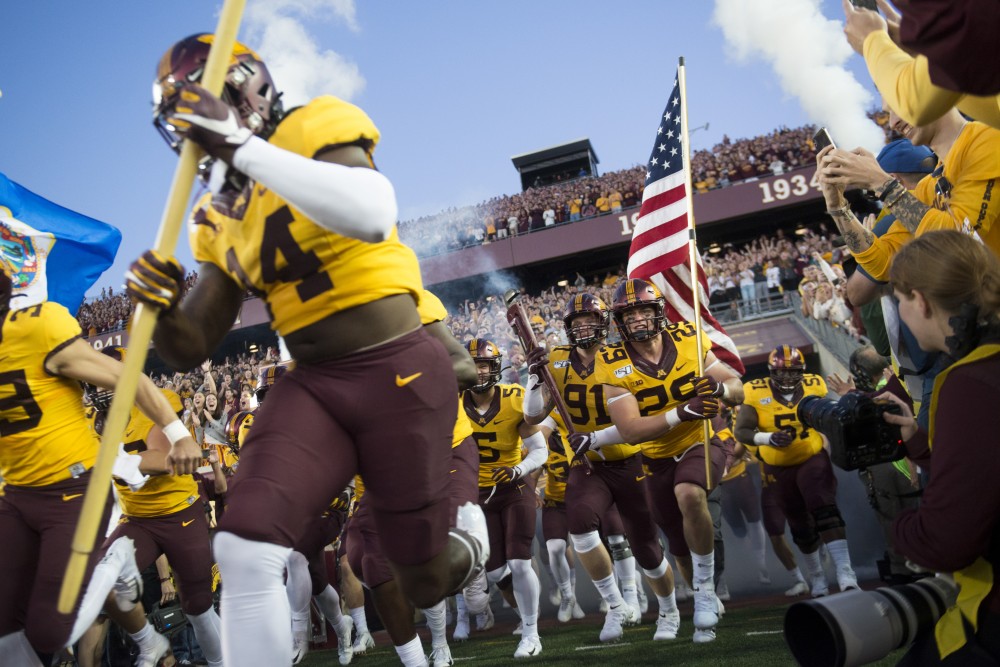 The Gophers run on to the field at TCF Bank Stadium on Thursday, Aug. 29. Minnesota defeated South Dakota State 28-21.

Everything was set, and the Gophers were primed to make their first appearance in school history on ESPN’s College GameDay. Head coach P.J. Fleck made his newsworthy pitch after the win over Maryland on Oct. 26, even GameDay’s Kirk Herbstreit said he was all for the show heading to Minneapolis to cover the game against Penn State for a battle of the unbeaten.

Sold me. I love it. If only I were making the decision. Love their story. Undefeated Gophers vs Undefeated Lions! Gonna be HYPED!! https://t.co/pntybGBPOK

However, it was too good to be true, as the No.13 Gophers taking on the No.5 Nittany Lions was passed up by a matchup of No. 1 LSU and No. 2 Alabama.

It’s hard to argue with ESPN’s reasoning. Not only do these teams have a rich rivalry, but they are the two teams at the top of the AP Poll.

Still, for Gophers fans, the announcement was a let down. There was an abundance of reasons for this game being on the show. The emergence of Minnesota on the national stage, Casey O’Brien’s inspirational story, NFL talent on both sides of the ball, on top of the fact that College Gameday has never stopped by the U. However, it just wasn’t meant to be, for this season at least.

“We have to control what we can control,” sixth-year running back Rodney Smith said. “We haven’t experienced that and I think it would have been fun, but we know that even if they were to come here it’s not necessarily for us, it’s for the campus and the fans to enjoy. We would have prepared for the game just like we would each and every other game.”

If anything, a lot of Minnesota’s fanbase on social media was distraught over the loss of GameDay and the Gophers players were mostly unphased by it.

“As long we just keep getting better and better, eventually, they’ll come to you,” said redshirt sophomore defensive back Antoine Winfield Jr.

Although Minnesota will not be making an appearance on College GameDay, Fleck had a laugh while making fun of some of the younger players who got starstruck at the thought of the show coming to town.

“College GameDay, someone asked me, ‘What do we get to do during game day? Hold signs?’” Fleck said. “No, you got to play the game. You don’t get to go out there and talk to Lee Corso, hang out with him. He’s not going to care to hang out with you.”

To Fleck, every game means something, regardless of the opponent.

One thing Fleck wants people to know is that the Gophers deserve to be in the position that they are now, with a chance to take down one of the top teams in the nation this Saturday.

“You’ve earned the right for a big game,” Fleck said. “No matter who it was against, you earned the right for a big game because of what you’ve done. The only way to continue to have that is keep having success in these big games, big moments. The pressure they have on themselves to play a top-five team in the country, that’s earned. Not just play them, because they’re on all of our schedules. But it means something, right? I think that’s really special.”