Dinkytown a revolving door for biz

Despite its high foot-traffic, the University-area commercial district loses and gains a handful of businesses each year. 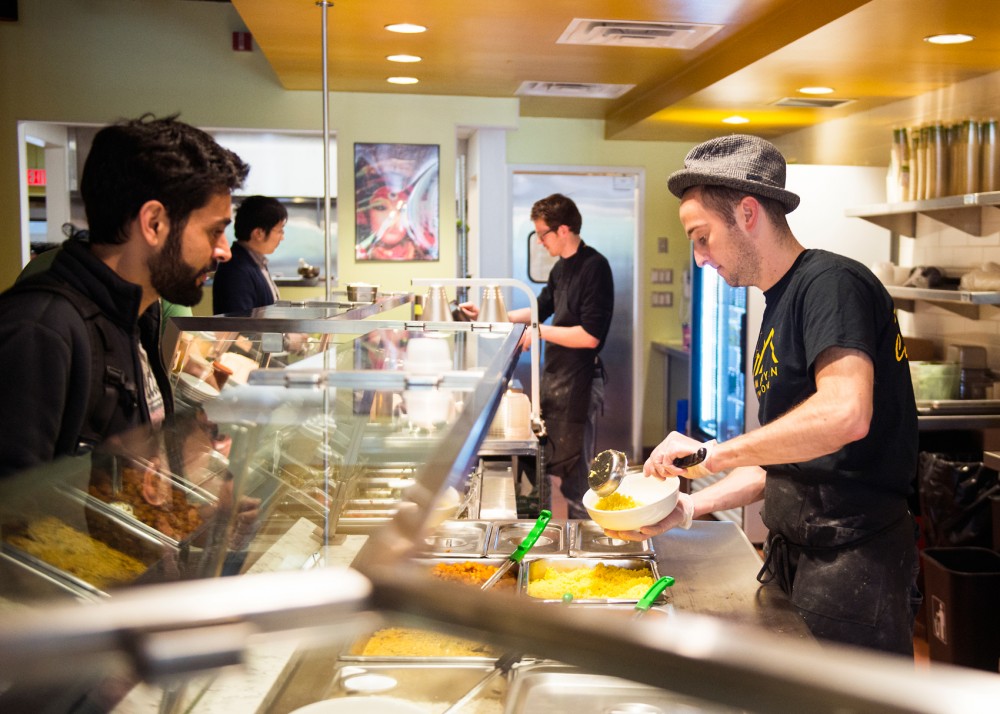 General manager James Munson prepares an order for customer Humberto Naves on Wednesday at the new Himalayan restaurant in Dinkytown. This was Naves' second time at the new restaurant, which recently moved into its Dinkytown location following the closure of Pizza Studio.

Benjamin Farniok
When Brian Wheeler set up shop underneath Dinkydome Lofts, he expected his store to do well.
But Baldy’s BBQ opened its doors only to close them for good three years later.
Wheeler’s story is not an unusual one of the Dinkytown business district, where about two businesses shutter each year. Last year, the commercial hub lost three different restaurants, though it also attracted new businesses in the newly available spaces beneath housing developments like Venue and the Marshall.
Randal Gast, co-owner of Qdoba Mexican Eats in Dinkytown, said he’s seen countless business owners come and go. Entrepreneurs arrive with a vision of tapping into an influx of student and neighborhood shoppers, he said, but they often fail to capture a sustainable chunk of the market.
“I believe there is an eclectic attractiveness to Dinkytown,” Gast said.
Gast credited his own success to community involvement, pointing to times when he has catered University-related events. For instance, in March, Qdoba provided food for the Professional Student Government elections.
When Qdoba moved into its current location in 2006, he said, the replacement of the independent business Purple Onion by a chain struck a community nerve. Some locals, looking to keep the district’s small-town feel, boycotted the chain as well as the arrival of nearby Potbelly.
Since then, Gast said, rent in Dinkytown has transformed, spiking from roughly $15 per square foot up to as much as $40 for the same space.
Rent for the space under Dinkydome Lofts, Wheeler said, cost about a fifth of his restaurant’s $45,000 monthly income. He said the high price of entrepreneurship in Dinkytown proved to be Baldy’s downfall.
Gast said moving into the area is much easier for franchises, which benefit from an established brand and familiar products.
Today, Dinkytown’s main roads are lined with nearly as many franchises as independent businesses. Five Guys, Qdoba, Starbucks, Subway and Pizza Hut can be found spread out among local mainstays including Blarney Pub and Grill, Espresso Royale, Burrito Loco, Book House and Varsity Theater.
In 2015, Chicago-based market research firm NPD reported a 2 percent loss of independent restaurants nationwide, as chains continued to grow.
Everything from lack of start-up funding and a greater vulnerability to fluctuations in food ingredient markets can often spell the end for many small businesses, Gast said.
Franchise restaurants, he said, tend to have price-protected deals that can reduce and stabilize prices.
Coming and staying
Himalayan Restaurant got its start in late April, filling the storefront left empty by Pizza Studio.
Himalayan Restaurant co-owner Naveen Shrestha said business has been good and bolstered by the direct involvement of himself and the other owners.
“It’s not like we don’t work hard,” he said.
Shrestha said he heard about an opening in Dinkytown through a frequent customer from the area who would often travel to visit his store’s other location on Lake Street.
He said he decided to move into the Fourth Street Southeast site after noticing there were no area restaurants serving Nepalese and Indian cuisine.
Mike Mulrooney, co-owner of Blarney, said he thinks diversity can be a strong predictor of success by allowing new businesses set themselves apart from town staples.
“I don’t think that the addition of food is bad by any means. It’s what type of food and what type of restaurants,” he said.
A variety of options can also encourage people to revisit Dinkytown over and over again instead of tiring of similar options, he said.
Blarney, which has been in Dinkytown for 12 years, has been successful in part because of its tendency to keep up with changing times by updating the menu and specials, Mulrooney said. He said continual, small adjustments are key to how business is conducted in the area. Mulrooney has also moved away from print advertising, using more of his marketing budget online, which he said can garner more attention.
Vescio’s Italian Restaurant, a Dinkytown landmark since 1956, is one of the area’s oldest businesses. Generations of University students have passed under its red, white and green awning for a plate of spaghetti or a glass of wine.
Frank Vescio, the restaurant’s owner, said his restaurant’s longevity feeds off of paying close attention to what patrons want. Right now, he said, it’s patio seating, so Vescio is working to cover up a grate to allow diners to step outside to eat.
“It’s a lot of little things,” he said.
Before opening up a brick-and-mortar shop, Bradley Taylor, kicked off his doughnut business as a pop-up for the first several months.
Sssdude-Nutz, which opened its permanent location in September, is struggling to keep up with demand, Taylor said. The establishment’s small size limits the amount of food it can prepare in a day and forces them to close at inconsistent times.
“That’s all our kitchen place will let us do,” he said.
Initially, Taylor said, Sssdude-Nutz struggled to integrate itself into the district. But he said by allowing people to show their art on the wall and otherwise getting involved with community members has remedied the disconnect.
“You have to say, ‘What’s up?’ and go engage with them,” he said.
Delete Image
Align Left
Align Center
Align Right
Align Left
Align Center
Delete Heading