A student guide to the 60B, 5th Congressional District, gubernatorial and Senate races

Minnesotans will vote on numerous statewide and national races on Nov. 6. 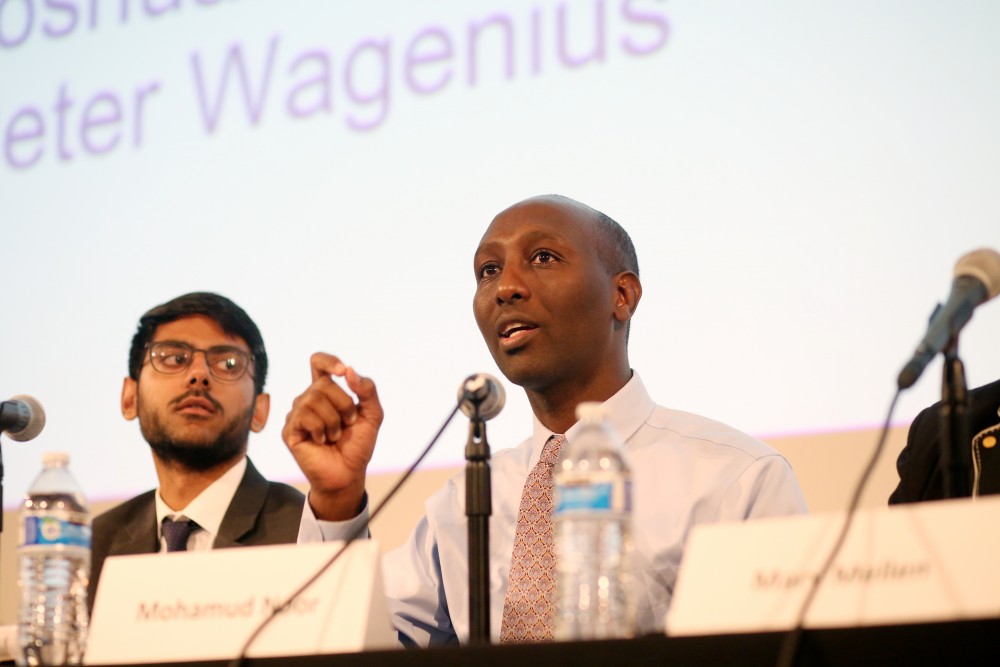 Mohammed Noor speaks during a forum for candidates for the 60B Senate seat formerly held by Ilhan Omar on Monday, July 16 at Cowles Auditorium.

In the upcoming general midterm elections, Minnesota will see an open race for governor and both U.S. Senate seats on the ballot. The 5th Congressional District and House District 60B races are also open, with both districts encompassing the University of Minnesota campus.

House District 60B includes the University of Minnesota and Augsburg University, as well as Marcy-Holmes, Prospect Park, Seward, Southeast Como and Cedar-Riverside neighborhoods.

After winning by around 900 votes over his opponent in the primaries, Noor will be on the ballot Nov. 6. A current executive director at the Confederation of Somali Community in Minnesota, he is a former board member of Minneapolis Public Schools.

“From safety to funding to education to housing, and policy initiatives and research and development, I’ll be an asset to the U,” Noor told the Daily in September.

Noor ran for the Ward 6 City Council seat in November, which he lost to incumbent Abdi Warsame. In 2016, he ran against Omar for the 60B seat.

Patiño received 190 votes in the 60B Republican primary, cementing his position in the race.

Student issues like tuition and housing — especially as they pertain to Greek students — and immigration make up a large focus of Patiño’s campaign.

“[Greek life] gives people a home, and I think that’s what people need,” Patiño told the Daily in September. “We need that companionship. I strongly support what they stand for: doing service, providing leadership opportunities and lower cost for housing.” Minnesota’s 5th Congressional District covers eastern Hennepin County, including the entire city of Minneapolis, along with parts of Anoka and Ramsey counties.

Former House District 60B candidate Ilhan Omar won the DFL spot for the seat in the primaries by a significant margin. She will compete against GOP opponent Jennifer Zielinski in the midterms.

The first elected Somali-American legislator in the country, Omar is a strong advocate for immigration and refugee rights, as she fits into the categories herself.

Omar has discussed dismantling U.S. Immigration and Customs Enforcement and establishing a clear pathway to citizenship and residency for individuals already living in the country.

With a strong student base, Omar often cites her accessibility around campus. “People between 18 [and] 24 in this district decide the vote. I’m going to ask you all to pledge to do so,” Omar said at a rally on campus this fall.

A Twin Cities resident, Zielinski currently lives in South Minneapolis, where she works in health care.

On her campaign website, Zielinski identifies her top priorities as keeping the economy growing, continuing the Trump tax cuts and defending First and Second Amendment rights.

Zielinski said she will work for affordability and effectiveness of health care, improving education and addressing the opioid epidemic.

Franken’s resignation calls for a special election Nov. 6, and Smith has campaigned to keep her seat against GOP-endorsed Karin Housley. The seat will be on the ballot again in 2020.

Sen. Tina Smith, D-Minn., previously served as vice president of external affairs for Planned Parenthood of Minnesota and the Dakotas. She was also chief of staff for Dayton during his first term.

She rallies for cost of education and reproductive health care. At a rally on campus this fall, Smith discussed her support for a student debt refinance bill and higher education funding.

“How are you going to be able to figure out the life that you want when you leave this incredible institution buried with financial obligations that keep you from making the choices you want to make?” Smith said to the crowd.

Housley said it’s important to include the college voice in her campaign, and often interacts with the Republican groups on campus who phone bank and door knock on her behalf.

“The college is a voice that hasn’t been heard enough in the Republican party,” Housley said. “This is one of the best chances we have at taking a Senate seat in a long time.”

Sen. Amy Klobuchar, D-Minn., won election to the U.S. Senate in 2006. She will be running for her third term against State Rep. Jim Newberger, R-Becker.

Klobuchar is a member of the Senate Agriculture Committee and Judiciary Committee in Washington, among others, with her efforts directed toward protecting the Great Lakes, keeping Minnesota’s waterways clean, the Farm Bill and campaign finance reform.

Newberger, who lives in Becker and represents parts of Sherburne and Benton counties near St. Cloud, spent three terms in the Minnesota House.

A paramedic who is an adamant supporter of gun rights in the Legislature, Newberger has spent the past sessions voting generally conservative to represent his rural, central Minnesota district.

A vocal supporter of the University of Minnesota, DFL Gov. Mark Dayton is retiring after serving for nearly eight years.

The two candidates recently took part in a University of Minnesota Alumni Association survey regarding higher education funding and policy. Both highlighted the need to make the University more affordable and acknowledged its influence on state and local economies in their responses.

Rep. Tim Walz, D-Minn., hails from southern Minnesota and has held the 1st Congressional District seat since 2007. A former educator, Walz has noted he’s supportive of making tuition more affordable. At a rally on campus this fall, his running mate Rep. Peggy Flanagan, DFL-St. Louis Park, said they would work on legislation to bring down tuition costs and refinance loans if elected.

“The state should continue to invest in our institutions to ensure we live up to the promise of accessible, affordable and excellent higher education for all Minnesotans,” Walz said in the survey.

After serving six years in the state House of Representatives, Johnson currently represents District 7 on the Hennepin County Board of Commissioners. He is the GOP nominee for governor of Minnesota.

Johnson said he would not oppose stronger restrictions than what federal law and University policy currently dictate for fetal tissue research at the University, according to his survey response.

Johnson also stands firm on health care issues, pledging to drive costs down if he were to be elected.