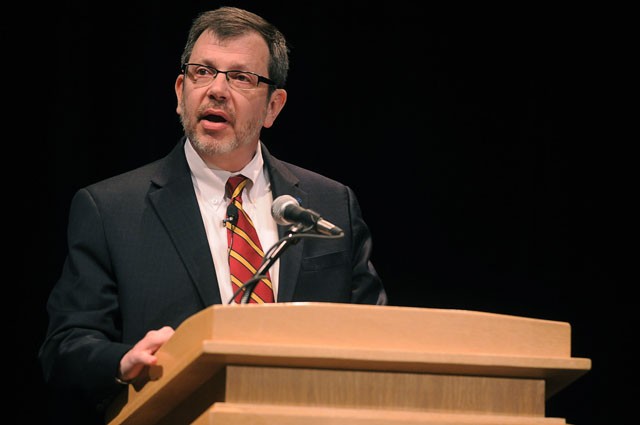 There are plenty of issues facing Eric Kaler, the University of MinnesotaâÄôs next president. Whether heâÄôs ready, athletics issues, especially the football team, will be near the top of that list.
On July 1, Kaler will inherit the presidency  and all the athletics-related woes that come with it: a football program in shambles, an embattled athletic director whose contract will be up after next year,  a thinly-stretched athletics budget and a generally disgruntled base of fans and boosters.
Current President Bob Bruininks has also said that cutting non-revenue sports could be a reality in the near future.
The major decisions regarding these issues will fall squarely at the feet of Kaler, whose rÃ©sumÃ© as an academic speaks for itself but his chops for managing one of the larger and more troubled athletic departments are less certain.
Kaler comes from Stony Brook University, part of New YorkâÄôs state college system, which competes as a Division I-AA school with a total athletics budget of $17 million âÄî less than a quarter of MinnesotaâÄôs.
Stony BrookâÄôs athletic director Jim Fiore doesnâÄôt think itâÄôll be an issue.
âÄúI think [the University of Minnesota] hit a home run,âÄù Fiore said of the decision to hire Kaler, who has served as provost and senior vice president for academic affairs at Stony Brook since 2007.
Fiore said that since Kaler arrived, the two men have worked closely to improve financial support, national visibility and general excitement around campus for Stony BrookâÄôs athletic department, especially its football program.
Since arriving in 2003 Fiore has seen the schoolâÄôs football program go from having zero to 63 fully-funded scholarships, due in large part, he said, to Kaler.
Fiore called Kaler âÄúa terrific fundraiserâÄù with âÄúa great personality,âÄù and said Kaler secured the largest donation in Stony Brook history from an ex-football player who had been uninvolved with the university for 30 years.
Fundraising will be crucial for MinnesotaâÄôs athletic department and football program, which is now on the hook for the bought-out contract of Tim Brewster as well as two other coaches and fell about $3.4 million short of a balanced budget in the last fiscal year.
However, MinnesotaâÄôs athletics troubles are on a bigger scale and stage than those of Stony Brook.
Kaler will immediately face a decision regarding the future of athletic director Joel Maturi. HeâÄôs the subject of increasing public criticism from fans, former players and donors who say MaturiâÄôs record of hiring and dismissing unsuccessful coaches leaves the University on the hook for their buyout costs and should disqualify him from heading the search for BrewsterâÄôs replacement.
Maturi, whose contract expires after next year, was recently offered an extension by current President Bob Bruininks.
âÄúIt has a lot to do with my future in some ways,âÄù Maturi said Nov. 13, before Kaler was named a finalist, of the effect a new president would have on his future. âÄúItâÄôs one of the reasons very openly and honestly I havenâÄôt signed the extension offer thatâÄôs been given to me because IâÄôm not so sure in this case âÄ¦ if this person wants me, and IâÄôm respectful of that. I donâÄôt want to be here if the boss doesnâÄôt want me to be here.âÄù
Fiore said Kaler provided input but did not play a major role in the hiring and firing of athletics personnel at Stony Brook, but that Kaler understood that he will have to make those decisions at Minnesota.
âÄúHe gets it,âÄù Fiore said, adding, âÄúYou change a culture by changing the people often. He understands that.âÄù