Mayor Chris Coleman gave his State of the City address Monday afternoon and focused on getting St. Paul through tough economic times. 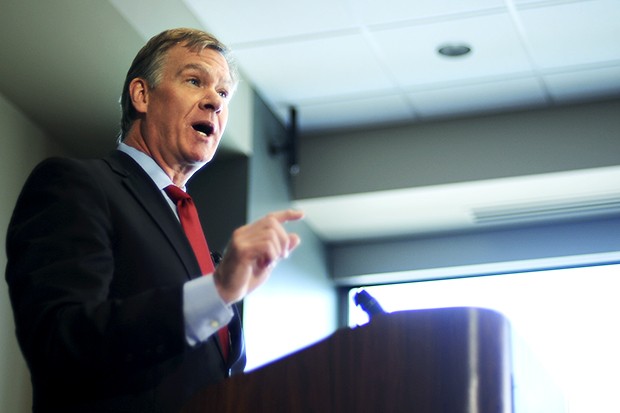 St. Paul Mayor Chris Coleman gives his State of the City address Monday at St. Josephs Hospital. The Mayor’s speech touched on the current economic hardships, but was positive about the city’s future.

St. Paul Mayor Chris ColemanâÄô s State of the City address Monday afternoon focused on how the city is going to get through the tough economic times. The focus was mostly on positive economic signs and current projects to help citizens. The mayor acknowledged that the city itself has had to make cuts, but didnâÄôt dwell on them, and instead focused on the positive. City Council President Kathy Lantry said the speech focused, as it should have, on general policy and the future, not on specific problems. âÄúItâÄôs about how do we figure out how to take the things we have that are good and move them forward, instead of just wringing our hands,âÄù Lantry said. Coleman said he was optimistic about the Central Corridor Light Rail project, as barriers to its completion continue to fall. He was also excited about the plans for a high-speed rail line from St. Paul to Chicago that President Barack Obama mentioned last week. âÄúWe will see a renaissance of our community through a high-speed connection,âÄù Coleman said. Coleman also talked about economic initiatives that have been helping the city. The city and its development partners, rehabbed 900 vacant structures in 2008, which have all since been reoccupied, Coleman said. He said a high point for the city was that between June 2008 and March 2009, St. PaulâÄôs number of vacant structures did not increase, during what Coleman called the âÄúhousing marketâÄôs most challenging period.âÄù First Ward councilman Melvin Carter III said he has noticed a change; now people are actually moving into homes instead of just having their homes foreclosed. But the work needs to continue he said, because he can still see four or five vacant homes while standing on his front porch. Coleman also introduced two new programs designed to help St. Paul residents buy their first homes. One is a tax credit the Twin CitesâÄôs CityLiving program secured for their citizens, which they are calling âÄúTake Credit!!.âÄù It will give first-time homebuyers in both cities the opportunity to deduct 20 percent of the interest paid on their mortgage from their federal income taxes. He also announced the new St. Paul Heroes program, which will provide interest free $15,000 loans people who have âÄúdedicated their lives to serving the community,âÄù which will be forgiven after ten years. The program includes firefighters, active military, health care workers, police officers, teachers and public employees. Natalie Sedie, a marketing manager for St. PaulâÄôs Planning and Economic Development department, said St. Paul has enough federal funding to enroll 130 people in the tax credit program and the city has allocated enough money for 30 hero program loans. Melvin said he was glad to see the Heroes program announced since it had been a part of his own campaign. âÄúWhat we heard was a very responsible portrayal of where we are and how weâÄôre going to get beyond this place,âÄù Carter said.