President Eric Kaler addressed students and protesters on Thursday, stressing the need for free speech on campus after the vandalizing of a controversial panel on Washington Avenue Bridge. 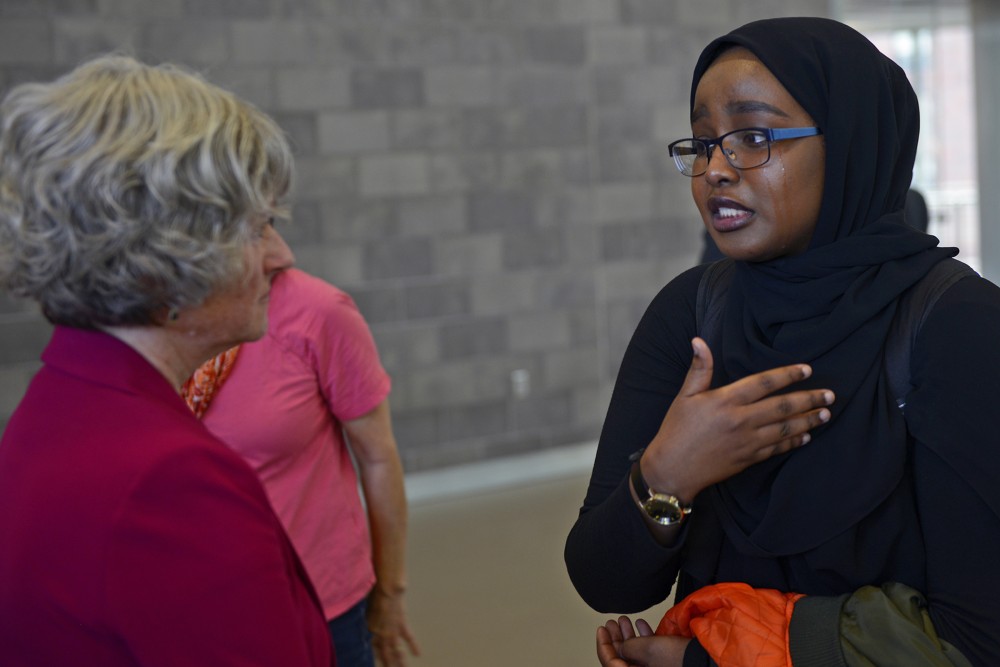 Samaya Mohamed right, speaks with Teddie Potter after the campus conversation ended on Thursday, Oct. 6, 2016 at the University Recreation and Wellness Center. Samaya was one of the protesters that spoke in front of the crowd addressing President Kahler's email that made her personally feel unsafe from it.

A controversial mural that some say was racist and xenophobic has sparked a debate over the limits of free speech at the University of Minnesota.

The University has experienced the confluence of frustrations and opposing viewpoints surrounding the issue following the painting of a mural by College Republicans which prominently featured the phrase, “Build the Wall.”

The mural ignited protests and prompted dueling letters and statements that called for censorship of language that is perceived to be hateful. The event also caused some to advocate for allowing all varying or unpopular opinions, no matter how offensive they may be.

Despite the outcry of the mural’s message, University President Eric Kaler called for those who disagreed with the message to “engage in more protected speech,” drawing criticism from many who were angry that he didn’t denounce the message.

From trigger warnings to political correctness to bias response teams, free speech on college campuses has become a divisive debate at colleges and universities — and Kaler’s support of free speech echoes many other administrators’ stances that say speech, no matter how offensive,, needs to be protected.

“The “Paint the Bridge” incident has generated much discussion and debate … I know for many of you, particularly Latinx students, faculty and staff, the words on the panel hurt,” Kaler said in a schoolwide email about the event. “It is especially important for our University to respect political speech. It is at the core of our academic tradition, our political process, and the laws of the land.”

Still, certain speech at the University has inspired outpourings of emotions from students, faculty and community members that say free speech should be limited in instances where offensive speech is directed at groups of people or individuals.

At least 100 protesters marched from Coffman Memorial Union to a discussion at the University Recreation and Wellness Center days after protests over the mural sprang up the first time.

Protesters were handed a microphone about 15 minutes into the conversation to share their views on stage for the remainder of the event.

Protesters addressed Kaler directly, calling him a hypocrite for defending College Republicans’ freedom of speech while failing to recognize, they said, the same free speech rights of six students who were arrested for protesting tuition hikes at a Board of Regents meeting in June.

“I do think that my message over the weekend about ‘Build the Wall’ should have been more inclusive about recognizing the pain it caused,” Kaler said, adding that he regrets weak wording in a campus-wide email concerning the College Republicans’ panel and subsequent vandalization.

Minnesota Student Association President Abeer Syedah told protesters to “cause a scene” while the group was gathering on the front steps of Coffman Memorial Union.

“President Kaler had the audacity to tell me [in a meeting] that he believes protests accomplish nothing for conversation,” she said. “Keep that in your hearts today when you go and protest.”

Events like these have added to a fissure between those who think “hate speech” doesn’t have a place on college campuses and free speech advocates.

“When groups that consider themselves oppressed try to stop speech, I think, they’re … not serving their own interests,” she said.

Kirtley said human emotions are a factor in every debate but particularly in a university setting, intellectual conversation should be given precedence.

She was critical of some of the University’s actions to accommodate the feelings of marginalized peoples, such as the implementation of an anonymous reporting system of professor’s comments, which may suppress free speech.

There will inevitably be “casualties of the first amendment,” Kirtley said, referring to those who might be offended or hurt by certain speech.

“They seem to think that people’s feelings trump the first amendment — they don’t. Not in a state university,” she said. ”This kind of rallying cry, that there is a correct way to express views, that certain ideas are not protected … is to me very very disturbing.”

Alaina DeSalvo, a graduate student in higher education organizational leadership and development, said she was disappointed with the outcome of the conversation, even after she stayed to talk with Kaler in a small group.

“People sat up here today, sharing their real true feelings, they were crying,” she said. “Kaler just said it was free speech under the law in a completely cold and composed way, and none of this mattered to him. That’s so disappointing to me.”

The debate following the “Build the Wall” panel and Kaler’s response, has been a welcome sight to Christopher Terry, a University assistant professor of journalism specializing in media law.

Terry said he was wary of the requests to limit speech. He asked that students take a step back and realize that just because speech is offensive doesn’t mean it’s not protected.

“If you honestly advocate that some speech has to go, the next speech that goes is yours … It’s all or nothing,” he said.

College Republicans President Madison Faupel was asked for comment at the “Campus Conversation” but declined, and additional calls to the group were unanswered.

Layna Darling contributed to this report.