The band, formerly known as GLOSS, recently changed their name. 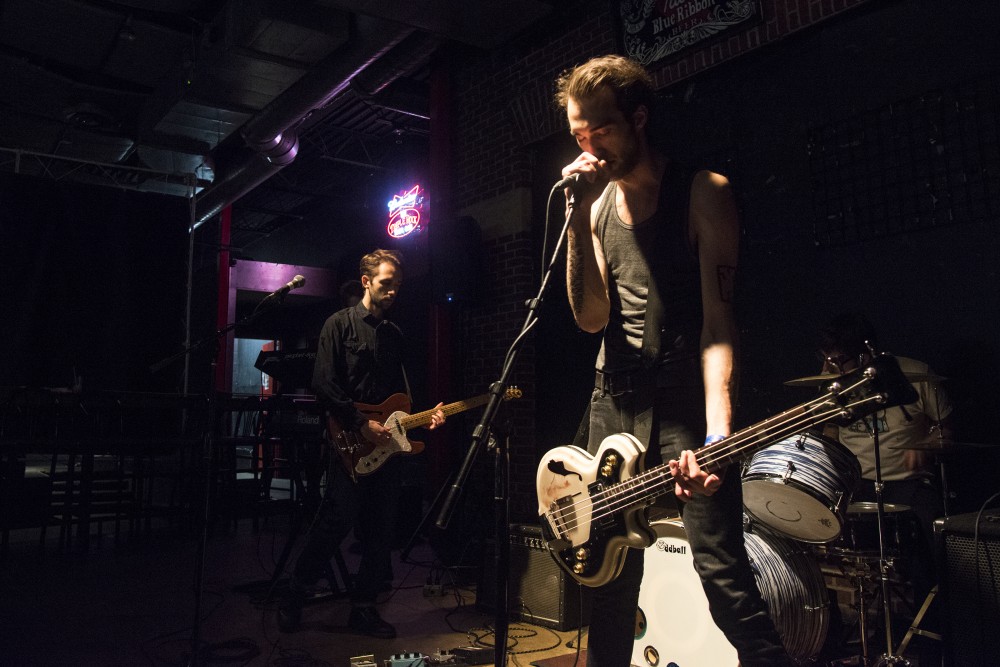 For any band, a name change comes with certain risks, but when a newly-discovered word aligns with a group’s aesthetic — what’s the harm?

That was the case for Minneapolis post-punk inspired band, Posh Lost, formerly known as GLOSS — a name that had grown complicated with the rise of Washington based queer-core group G.L.O.S.S.

“After months of nothing, our synth player [Emmy Carter] showed up to practice with this new word of the day: poshlost,” said bassist and singer, Jack Woolsey. “It’s a Russian term without a real translation and it basically means art that comes from a morally-corrupt or bankrupt place. It fit perfectly with the stuff I was writing at the time.”

The “stuff” being written at the time was released this August as the band’s self-titled debut album. The record, which was recorded at Blue Bell Knoll with Neil Weir and Ollie Moltaji, became Bandcamp’s “Album of the Day” soon after.

The group’s freshman record — produced under thi new name, Posh Lost — reveals anxieties over adopting a new identity. But that identity crisis is far-reaching and vital to their sound.

“The most important thing about us is that we are an amalgamation of five people’s very different tastes in music,” Woolsey said. “I often find myself arguing over everyone’s new favorite band or song.”

The band’s ethos is very much a product of these disparate influences.

“We all bring different skill sets to the table,” guitarist and singer Jeff Cornell said. “[Carter] is probably the most classically trained of the group. My taste leans towards pop song structures, so I focus on hooks. Jack brings the most energy to the group. Sean is the biggest record collector between all of us and his taste is very far-reaching.”

And despite their differences, the group’s core has been friends since middle school. Woolsey, Cornell and guitarist Sean Neppl all grew up in suburban Minnesota.

The band’s original drummer, Jordan Bleau, introduced the other members to singer and synth player Emmy Carter. And like most of the members, Posh Lost was Carter’s first band.

“This was really the first thing I was a part of that left a garage,” Carter said. “I just try to add textural layers as we put songs together. I honestly don’t experiment that much.”

After the departure of Bleau, the band met current drummer Josh Olson through mutual friends, which made their lineup complete.

“Josh is a talented multi-instrumentalist,” Cornell said. “He can help write on [any instrument]. He approaches drums differently than those who only play the drums.”

Atypical for most rock bands, Posh Lost writes songs mostly by committee. One of the band’s members will come up with a riff or a lyric, and they’ll all help build a song off of it. The aim is to always keep ideas bouncing. Once the structure of the song is complete, Woolsey and Cornell write lyrics and melodies independently and see which ones work better.

“We are always trying to perfect our arrangements and transcend our influences,” Cornell said. “We want to build off the momentum of our newest record and keep striving to make a sound that truly represents us.”

A summer tour brought the group across the country, and for them, it was the culmination of years of hard work. Still, there were hiccups along the way.

Carter is a bit less fatalistic about the decision.

The group’s future goals are a less concrete — longevity and influence are their primary concerns.

“I just want to be remembered,” Woolsey said. “Long after we’re done, I still want kids recommending our stuff to each other.”