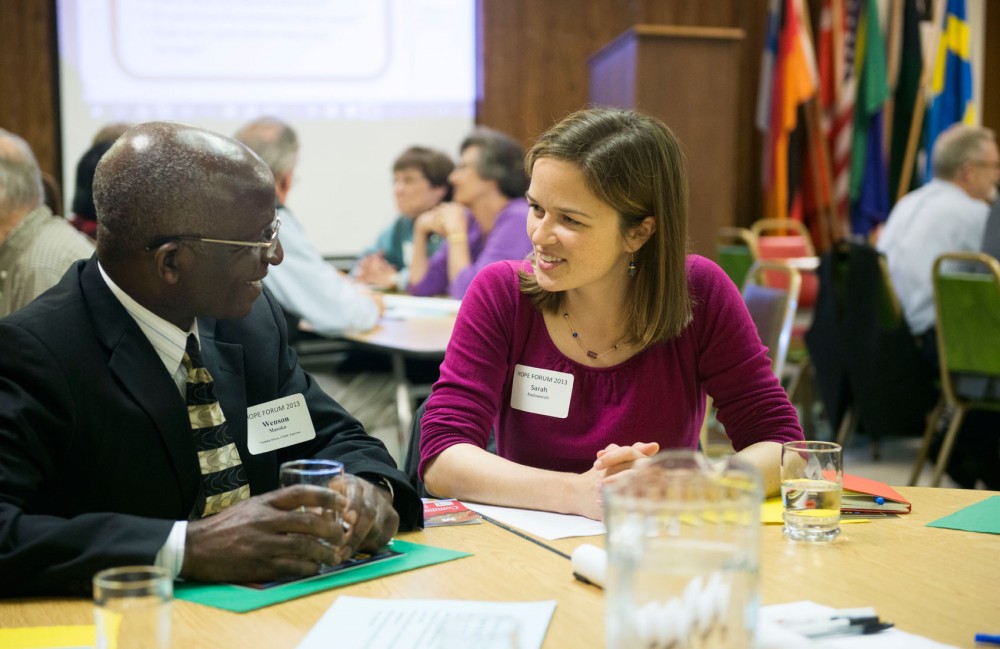 Champlain intern at Fairview Wenson Masoka and policy research analyst for the Minnesota Chamber of Commerce Sarah Radosevich talk during a small group session at "Welcoming Immigrants to our Communities" held at University Lutheran Church of Hope on Saturday afternoon. The event hoped to spark discussion on what it means to be an immigrant in light of Amy Klobuchar's immigration reform bill that passed the senate in June.

As an immigrant from Malawi, Wenson Masoka has faced societal barriers in coming to Minneapolis.

Masoka, who is a chaplain intern at the University of Minnesota Medical Center, Fairview, spoke at the University Lutheran Church of Hope on Saturday, where church and community members discussed issues immigrants face and ways to help resolve them.

Immigration reform has heated up on the national level in recent weeks. U.S. Rep. Keith Ellison, DFL-Minneapolis, was arrested Tuesday on the National Mall for occupying a street for an immigration reform protest.

Nearly 80 people attended Saturday’s discussion, most of whom were church members. The event featured a video from U.S. Sen. Amy Klobuchar, D-Minn., who co-authored an immigration reform bill that the U.S. Senate passed in June.

Attendees at Saturday’s event discussed some of the less tangible issues that immigrants face — stereotypes, for example, or finding their place in a new culture.

Some non-immigrant attendees said they have felt uneasy entering new cultural settings in Minneapolis and would like to find solutions for overcoming that discomfort.

John Bablitch, University Lutheran Church of Hope outreach liaison, said church members hope to volunteer around the community in the future to help immigrant families but don’t yet have specific plans.

Presenters at the event also addressed the issue of employment opportunities for immigrants.

In addition to language barriers and societal issues, Masoka said, immigrants can struggle to find jobs. It’s upsetting, he said, because immigrants “are willing to work hard.”

Katherine Fennelly, a University professor in the Humphrey School of Public Affairs, said immigration reform likely won’t happen in the immediate future because the federal government is focusing on other issues, like the government shutdown.

Still, she said, it will eventually be addressed because “right now we have a broken system.”

Doug Hartmann, a University sociology professor and church member who gave a presentation Saturday on immigration trends, said the event was a step in the right direction for local community members to become aware of the challenges immigrants have to overcome.

“This discussion helped people think about how to deal with immigrants,” he said, “and how to make them feel welcomed in the community.”