After working under Jerry Kill for 19 years, Tracy Claeys is the Gophers’ acting head coach. 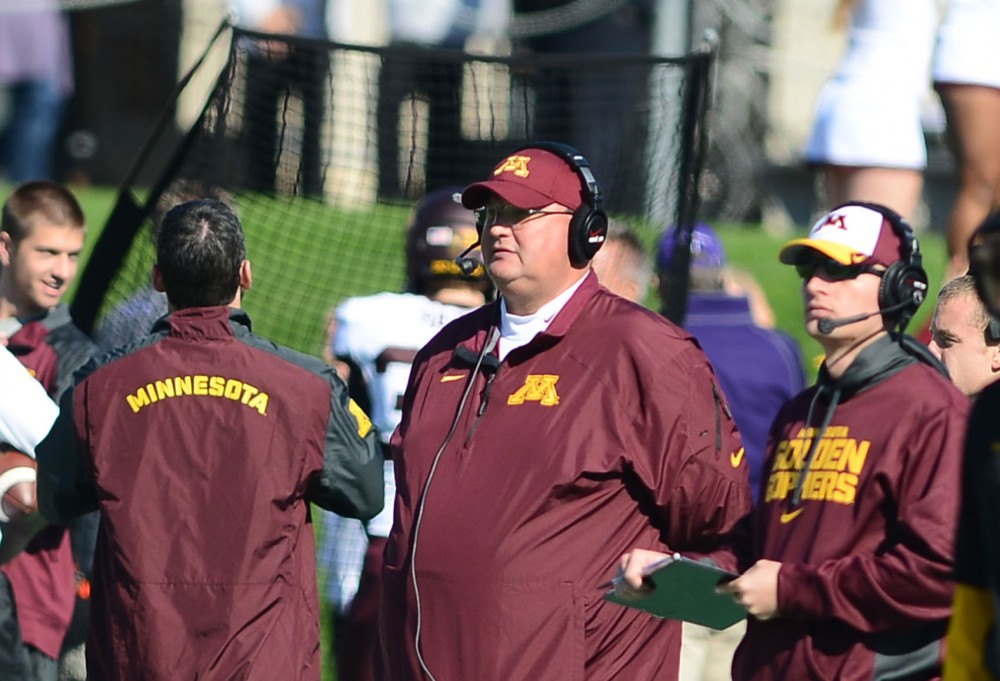 After the Gophers’ 20-17 win over Northwestern on Saturday, defensive coordinator and acting head coach Tracy Claeys returned home and went straight to bed.

Filling in as head coach for Jerry Kill, Claeys has a lot more on his plate nowadays.

“That’s a long week, and it gives you appreciation for all the obligations that need to be done outside of football,” Claeys said. “It’s a blessing I’m not married and don’t have a family, because I don’t know where I’d have time to spend with them this past week.”

Though Claeys may not have children, he often calls his players his “kids” at press conferences.

For last week’s game, the Kansas State graduate moved from his customary coaches’ box perch to the sidelines.

Claeys still called all of the defensive plays from the sidelines, which he said was an adjustment. Claeys said going against an up-tempo offense like Northwestern forced him to focus on play-calling instead of coaching “his kids” between plays.

“When we were on defense, I stayed away from the kids,” Claeys said. “With that no-huddle, you’ve got to think one play ahead.

“I did have to take one timeout there late in the game. … I was talking to [the kids], and I looked up and Northwestern’s ready to snap the ball, so I had to take a timeout. I didn’t have time to get the call in.”

Claeys and his squad will have to be disciplined if they want to pull off another upset this week when No. 25 Nebraska comes to the Twin Cities.

Claeys said Nebraska has the best skill position players of any team in the Big Ten, starting with its stud quarterback Taylor Martinez.

Martinez entered this season with 9,449 yards of total offense in three seasons — a school record before the season. The next closest benchmark is 7,915 yards, set by Eric Crouch, who won the Heisman Trophy in 2001.

Martinez is known for his ability to run the ball, rushing for 1,019 yards last year. In 2012, Minnesota’s leading rusher, running back Donnell Kirkwood, finished with 926 yards on the ground.

But Martinez might not even play Saturday due to a turf toe injury sustained in a game against UCLA. Though he started the first three games of the year, he hasn’t played since Sept. 14.

Claeys said he’s confident Martinez will suit up and said the Gophers are preparing to face him.

The Gophers lead the all-time series 29-22-2, but they haven’t beaten the Cornhuskers since 1960 — the last time they won the national championship.

Still, after the Gophers’ win at Northwestern, Nebraska has taken notice.

“Minnesota is getting better,” Nebraska head coach Bo Pelini said in a teleconference Monday. “I think they believe in what they are doing. I shouldn’t say I’m glad it happened. Hopefully, it caught our guys’ attention. I’m sure it did.”

After the Gophers’ defensive performance last week against Northwestern, there’s been some buzz about whether Claeys could become a head coach full time elsewhere.

Minnesota had two interceptions Saturday — one by defensive lineman Ra’Shede Hageman and one by linebacker James Manuel, which was returned for a touchdown.

Manuel credited Claeys with preparing him for the sequence.

“It was good play-calling [by Claeys] to get me outside,” Manuel said. “And then me watching film and knowing they were going to do something to that side.”

Though his team performed well last week, Claeys said it would be difficult for him to take a head coaching position after being on Kill’s staff for 19 years.

Still, he said if the opportunity arose, he would entertain it.

“If somebody came along and was interested, obviously I’d listen,” Claeys said.

Claeys said he’s not sure he’ll stay on the sidelines going forward, and he’ll “cross that bridge” if Kill returns.

For the second straight week, Claeys will focus on calling defensive plays from the sidelines against Nebraska.

He said he misses being able to stretch out in the coaches’ box with a Coke Zero in hand and his play charts laid out in front of him, but it’s not all bad.

“I mean, I feel more comfortable in that situation,” he said, “but I did enjoy being on the sidelines with the kids, too.”