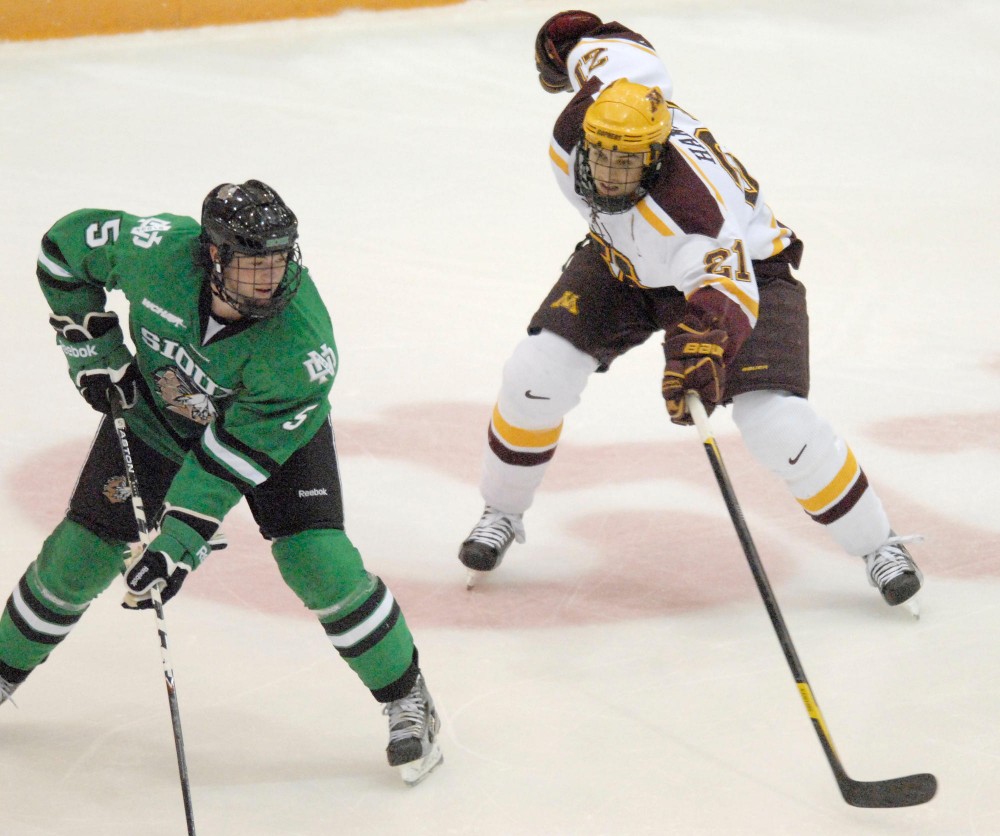 Kent Patterson recorded his record-breaking sixth shutout of the season Saturday at Mariucci Arena, but the story of the game was Nick Bjugstad.

Bjugstad recorded his first career hat trick in the shutout and No. 1 Minnesota (11-3-0, 8-2-0 WCHA) rebounded to earn a series split to St. Cloud State with a convincing 5-0 victory.

Bjugstad leads the team with 13 goals on the season and now has three straight games with a goal.

Bjugstad put the Gophers on the board first when he took a Zach Budish feed and ripped a wrist shot that ricocheted down off the crossbar into the net to make it 1-0.

Minnesota was quick to add to its lead when 44 seconds later Erik Haula led a two-on-one break and found Jake Hansen who beat Ryan Faragher five-hole.

Faragher was a conundrum to the Gophers on Friday, gloving nearly everything in sight, but with two early goals it appeared they had solved the freshman goaltender Saturday.

Neither team scored in the second period, but the Gophers more than made up for it in the third period.

Following an SCSU penalty Bjugstad netted his second goal on a one-timer from the left circle after a beautiful assist from Nate Schmidt to set him up.

That opened the floodgates.

Mark Alt got in on the scoring action 31 seconds later when he deked a defender a fired a shot past Faragher.

It was AltâÄôs second goal of the season and stretched the lead to four.

Though the game was well in hand at that point, Bjugstad would not be denied his third goal.

Once again on the power play, Bjugstad finished his hat trick with another one-timer from the left circle âÄî nearly identical to his second goal of the game.

Bjugstad only blasted three shots on goal throughout the game and found the back of the net each time.

Patterson turned away 30 shots Saturday to break Robb StauberâÄôs school record for shutouts in a season.

The Gophers will take on Michigan State next week in East Lansing, Mich.