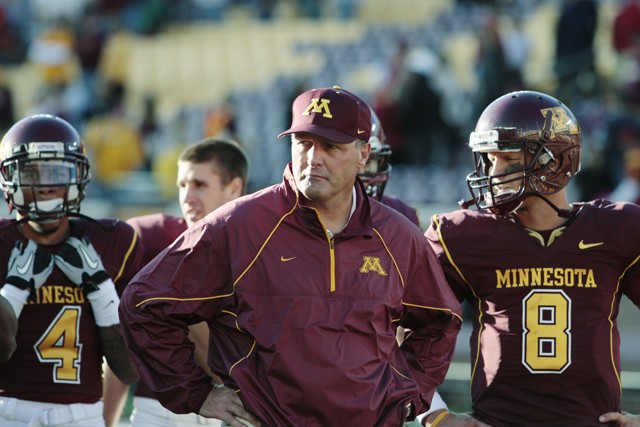 No. 18 USC came into SaturdayâÄôs game leading the nation in penalty yards, averaging 120 yards and 12 penalties a contest. They improved only nominally in that regard Saturday, committing seven penalties for 71 yards, including a couple of avoidable ones that gave Minnesota scoring opportunities. Minnesota wouldâÄôve had to settle for a field goal on its second drive, after Adam Weber overthrew tight end Eric Lair in the end zone on third-and-one, but a defensive holding call gave the Gophers a first-and-goal from the four. DeLeon Eskridge pounded the ball in two plays later, the first score of the game. Later, with the score tied at seven, a personal foul call on Hebron Fangupo bailed the Gophers out of a third-and-long situation. But the Gophers didnâÄôt capitalize on USCâÄôs biggest AchillesâÄô heel this season, punting three plays later, and the Trojans took their first lead of the game on the ensuing drive. âÄúWe took advantage of some situations where they helped us, and other situations we didnâÄôt,âÄù Minnesota head coach Tim Brewster said. âÄúWhen they do something to help you, you have to take advantage of it against a good football team.âÄù The Gophers continued staying clean penalty-wise, with just four for 30 yards. But Jewhan EdwardsâÄô facemask penalty early in the fourth quarter, which nullified a sack that would have forced USC to punt from the back of its end zone, gave the Trojans a second chance to put away the Gophers. And unlike MinnesotaâÄôs response to a personal foul, USC took advantage, scoring its final touchdown of the game just two plays later to bump its lead to 18. âÄúIt was big,âÄù Brewster said of the facemask, one of what he believed were four or five defining plays of the game. âÄúI canâÄôt fault our guy in that situation. HeâÄôs trying to go sack the quarterback, heâÄôs trying to go make a big play.âÄù Gophers draw inspiration from Cosgrove While his teammates were on the field battling USC, Minnesota wide receiver Connor Cosgrove was in the hospital battling leukemia. Brewster shared a text message he received before the game from Cosgrove saying, âÄúShock the world, I love all you guys.âÄù Brewster learned of CosgroveâÄôs diagnosis Tuesday. âÄúItâÄôs been an extremely emotional day,âÄù Brewster said. âÄúOur football team really wanted to do something special today âÄ¦ and thereâÄôs great disappointment that we didnâÄôt get the job done.âÄù After the game, Brewster told ConnorâÄôs father, Minnesota co-defensive coordinator Kevin Cosgrove, in front of the team that âÄúwe are to going to fight as hard as heâÄôs fighting.âÄù Weber sets record Weber set the Minnesota record for career touchdown passes with his 31-yard strike to DaâÄôJon McKnight in the third quarter, giving the Gophers a brief 14-13 lead. Weber passed fellow four-year starters Bryan Cupito and Asad Abdul-Khaliq with his 56th touchdown pass, adding his 57th late in the fourth quarter with a 22-yard pass to MarQueis Gray. Weber admitted that the record didnâÄôt mean much in a loss. âÄúIâÄôm sure when IâÄôm older IâÄôll appreciate it more, but right now losing is getting a little old,âÄù Weber said. âÄúItâÄôs important keeping this group together and winning next week.âÄù ManuelâÄôs big day Strong safety James Manuel, one of two true freshmen starting in the Minnesota secondary Saturday, began playing more like an upperclassman as the game went along after an early mistake. After getting beat by USCâÄôs Ronald Johnson on a 53-yard touchdown pass in the second quarter, Manuel created two turnovers that led to scoring drives. He made a leaping interception early in the third, setting up the GophersâÄô second touchdown and short-lived lead. Late in the fourth, with several USC second-stringers in, he wrestled a fumble away from Allen Bradford and recovered it himself. The Gophers slipped in a late touchdown eight plays later. âÄúItâÄôs tough to play as a true freshman with other freshmen out there, especially on your side [of the defense],âÄù senior safety Kyle Theret said. âÄúSo considering that, James had a great day.âÄù Extra points: – After leading the Gophers in rushing for each of the first two games, Duane Bennett didnâÄôt do much Saturday. He gained just seven yards on six early carries, and though Brewster said he wasnâÄôt injured, he didnâÄôt carry the ball at all in the second half. – With SaturdayâÄôs loss, the Gophers fall to 0-8 against ranked teams under Brewster. Their last win came in 2005, under Glen Mason, when they beat No. 21 Michigan on the road, 23-20. Related: – Kiffin so-so on USC’s performance – Live game blog – Pre-game blog – From USD to USC (preview) – Gophers battered, but looking to bury ugly loss and focus on USC