Despite rising trends across the state, U numbers stay low. 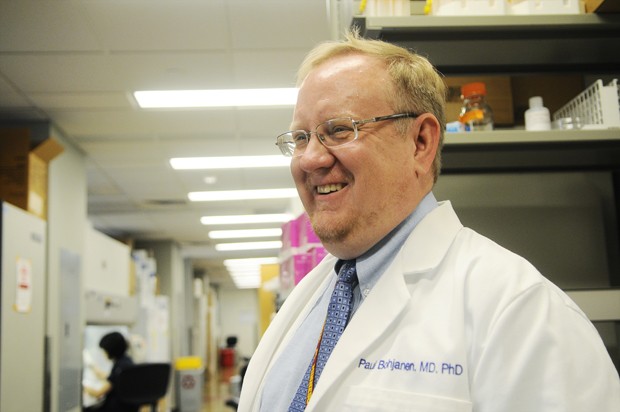 Dr. Paul Bohjanen, associate professor in the Microbiology Department at the University of Minnesota, explains the possible link between the increase in the HIV virus and immigration on Tuesday at the Mcguire Translational Research Facility.

With National HIV Testing Day on Sunday, health experts and officials are scratching their heads over the marked increase in HIV cases in Minnesota
last year.

Launched in 1995 by the National Association of People with AIDS, the testing day is held June 27 each year to encourage those at risk of acquiring the disease to seek testing and counseling.

The Minnesota Department of Health’s 2009 report found the number of HIV cases in the state had risen 13 percent from the previous year.

The department reported 368 new cases last year, an increase of 42 from 2008. It was the highest number of new cases the state had seen in 17 years, with the largest number of infections occurring among males ages 15 to 24.

HIV is rare among University of Minnesota students, with only 0.3 percent of students living with the disease, according to a 2009 study by Boynton
Health Service.

“I think, from our perspective, for anyone who is sexually active, it is always a good idea to know your status,” said Dave Golden, Boynton’s director of public health and communications.

Golden said that’s especially true for those who are at higher risk, such as those having unprotected sex, gay men and people with
multiple partners.

Some officials say the culprit is simply a new perception of HIV.

“People who are at the University today weren’t seeing the ’80s and ’90s when it was a fatal disease,” Golden said. “Although teaching through fear is never the best option, people who lived through that time had an inherent fear for the disease, and in the last 15 years it has been
different.”

“HIV is no longer perceived as a death sentence,” she said, “but it is still something that is lifelong and will impact your life in a major way, both financially and socially.”

Associate microbiology professor Paul Bohjanen said he thinks a major contributor to the rise in new HIV cases is due to African immigrants who come to the United States unknowingly carrying the disease.

Bohjanen focuses his work mainly on the source: HIV-positive people in Uganda, where the disease is a source of serious concern. More than 6 percent of adults in Uganda suffer from HIV or AIDS, according to Avert, an international AIDS charity.

Getting tested is critical in Uganda, as oftentimes those who are infected don’t know it and can unknowingly transmit it to others, Bohjanen said.

It’s a trend that can also be seen in the United States, where an estimated 21 percent of people who have HIV don’t know it, according to the Centers for Disease Control and Prevention.

Left untreated, HIV and AIDS can be catalysts for the development of other serious diseases that can kill a person more quickly than HIV or AIDS alone, Bohjanen said.

In his current research, Bohjanen is studying patients who develop cryptococcal meningitis, a fungal infection within the lining of the brain that occurs commonly in Africans who suffer from a severely weakened immune system, a symptom of AIDS. The infection can kill within six months.

Bohjanen and his colleagues are working to better understand cryptococcal meningitis so they can help patients recover from it and continue to survive with AIDS.

“The best-case scenario for someone with cryptococcal meningitis is that they get treated … and it gets better, and then they are treated for AIDS,” he said.

While it is unlikely that the situation in Minnesota will ever be as grave as in Africa, Bohjanen’s work calls attention to the importance of knowing one’s HIV status and making smart decisions about sex as young adults.

“What we have seen is the perception that HIV is a manageable disease and not that serious,” Golden said. “The problem is that if everyone approaches it that way, we are going to see a resurgence.”

“If there is any chance in the back of your mind that you might be positive, now is the time to be tested,” he said. “It is an easy way to know your status and get rid of that worry.”