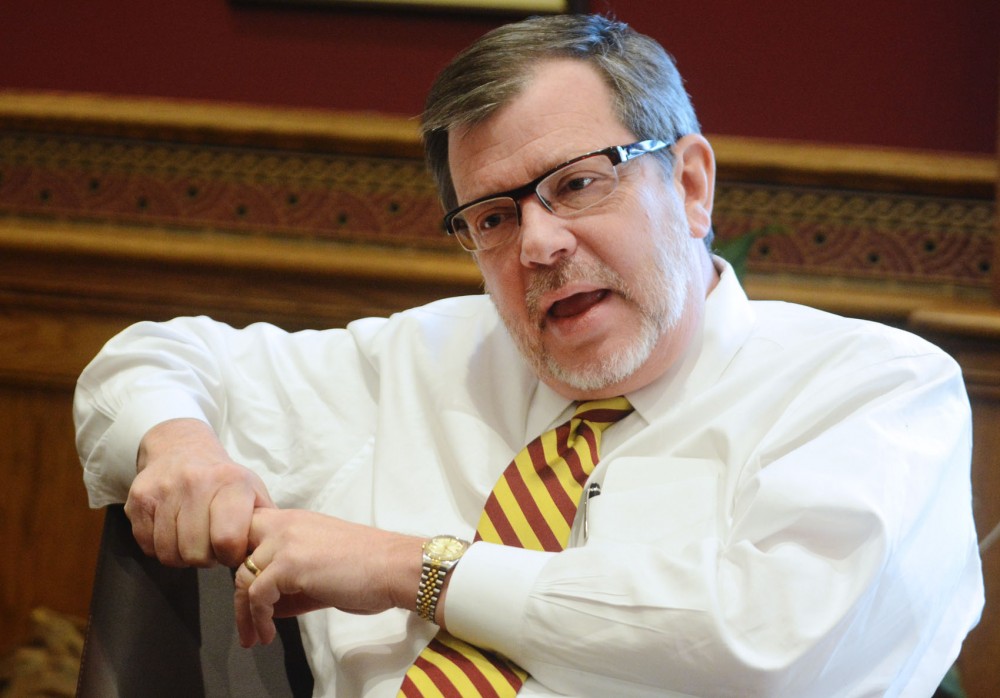 The Minnesota Daily sat down with University of Minnesota President Eric Kaler on Tuesday for its monthly Kickin’ it with Kaler interview.

Kaler discussed the pros and cons of the potential merger of the College of Biological Sciences and the College of Food, Agricultural and Natural Resource Sciences, the University’s response to crime in the area and his winter break plans in the last Kickin’ it interview of the fall semester.

In January, the task force evaluating the potential merger of the College of Biological Sciences and the College of Food, Agricultural and Natural Resource Sciences will compile a report detailing the disadvantages and advantages based on public feedback. How will this input affect the final decision?

It’s very important to the final decision. I’m keenly interested to hear what the community thinks about this idea. It’s by no means a done deal, and I’ll take very seriously, and the provost will take very seriously, what the community has to say about the idea. I’ve certainly gotten feedback, both pro and con, from a variety of people as I move around the University and outside the University — so we’ll see what people think.

What are the main concerns you expect to hear from internal and external stakeholders?

I think the principal concern … is maintaining the distinct undergraduate experience in the College of Biological Sciences and in CFANS. Students in both of those colleges are very happy with the experience that they have, and my impression is that they get a different kind of experience in those two colleges.

On the pro side, I hear from faculty who think that the ability to bring subject matter experts together across the two colleges will make collaborative research easier and maybe leverage our research agenda more aggressively. So there are certainly pros and cons.

But again, the consultative process is there for exactly this reason. … Just as in the college merger situation, I’m eager to hear what people have to say.

Was Lou Nanne the first person you and Norwood Teague approached as the lead fundraiser for the facilities master plan?

Crime on or near campus has been a hot discussion; even state legislators are weighing in. How is the University working to further ensure safety?

We work on this every day. Our police have logged 180 or 200 hours of overtime. We’ve been in regular contact with the Minneapolis Police Department; we’ve received help from them. We’ve received help from the Hennepin County Sheriff [Richard Stanek], and we’re making progress — there’s been some arrests. The Gopher Chauffeur program has been expanded, and it’s offering lots of rides.

MSA has been very, very helpful in talking with students about the need to be safe, to be aware of your surroundings, to take advantage of Gopher Chauffeur, to walk in groups and just be aware of the situation that [students are] in.

Clearly, safety is a top priority. Being a safe campus is important for many, many reasons, and we’re working hard to get that …

The University Board of Regents plans to review ways to improve campus safety at its upcoming meetings Thursday and Friday. Do you believe these changes will alleviate crime in or near campus?

This review of campus safety has been scheduled for a long time, so it’s timely, but it certainly isn’t a regent request in response to recent events. I expect [University police Chief Greg Hestness] will review what he’s been doing, and the regents will have a good discussion and perhaps offer some suggestions of things that we could do better. But again, we’ve been putting a lot of effort into our response.

The Faculty Senate just passed its resolution to create an independent, external panel to investigate how the institution conducts clinical research on human subjects. What do you think of the most recent developments in the Dan Markingson case?

I’m a big believer in shared governance, and so I’m willing to take the advice of the Senate and the panel. … I think they will find that our review processes are robust and that we do, in fact, protect patients in clinical trials, but there’s been concern raised in how we do that, and so our goal is to air out clearly and very publicly what we do and have a panel of external experts validate that and be sure we are doing this absolutely as well as can be done.

This is something that began before you were president. What do you see as your role?

My role is to look forward, and as I said, that will be the charge of the panel.

Last month, the Council of Graduate Students voted to separate itself from the Graduate and Professional Student Assembly [in summer 2014]. How will this affect the way the University receives input from graduate students?

I think the Office for Student Affairs is working with those groups to see how best to make those communication activities. … I’m eager to hear from our graduate students, and however they want to organize themselves to provide comments and inputs is really up to them. We’re going to listen regardless of the structure that they choose.

Do you have any big plans for the winter break?

Well, I’ve got to make a little trip to Houston, Texas, for the 27th, so I will go to the bowl game, and I’m looking forward to that. … [I’ll] probably spend some time with my wife’s family, in Tennessee for New Years and then get back up here shortly after that.

Anything else to add?

I’m very happy that we’re going to a bowl game. I think it’s a great outcome from a good season. I think our coach and his staff and our players should be commended for a good football season.

I’m looking forward to a successful end of the semester for all of our students. As always, it can be a stressful time, and people should feel comfortable in asking for help if they need it. We’ve got a lot of mental health services, counseling services, available, so I hope people take advantage of that if they feel the need.

I hope our students remain safe and aware of their surroundings as they’re moving — perhaps in unfamiliar places — as they move through their final schedule.