Stekr started in the first seven matches of Minnesota's season. 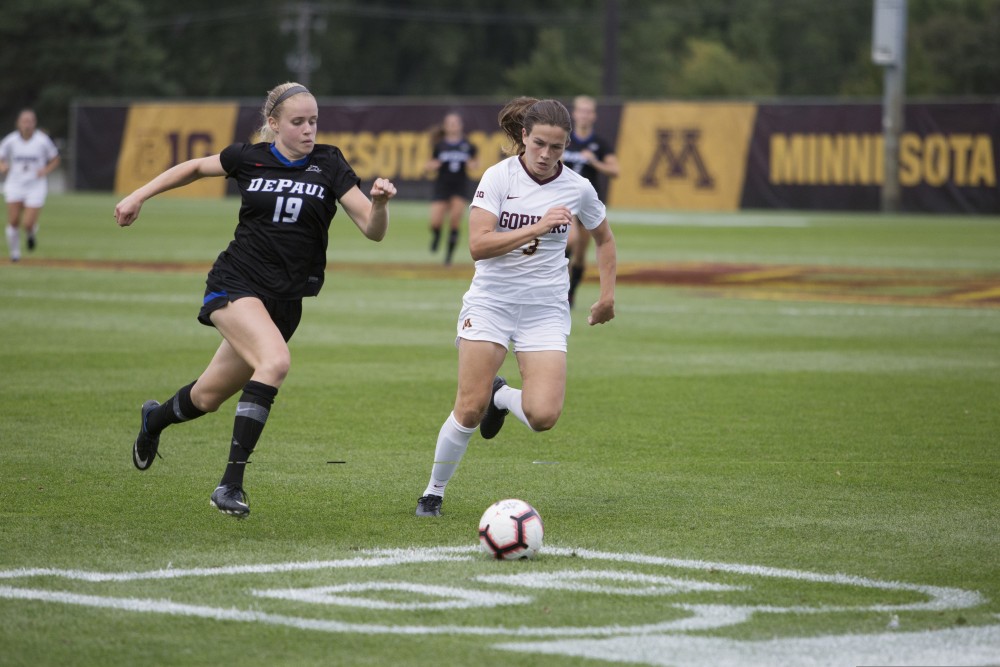 Freshman Delaney Stekr pushes to beat her opponent to the ball during the game against DePaul on Thursday, Aug. 30 at Elizabeth Lyle Robbie Stadium.

While senior defender Emily Peterson recovered from a torn ACL, freshman defender Delaney Stekr took her place as a left outside back.

Stekr started the first seven matches of the season for Minnesota. She has played 865 minutes and, although she has not recorded a point for the Gophers yet, she has taken three shots.

Stekr said it was nice to have a connection with Windingstad.

“I didn’t know her that well when we both were in Nebraska, but she’s reached out a lot and been a big help in this college transition,” Stekr said.

Peterson tore her ACL on March 13 during Minnesota’s trip to Italy, leaving the left outside back position vacant. Golan could have put in freshman Alana Dressely or junior Catherine Billings, but she opted to put Stekr into the starting 11.

Stekr said she was able to connect with fellow defenders Nikki Albrecht and Athena Kuehn not only on the field, but on road trips. She said they hang out in hotel rooms and on the team bus on the way to matches.

“When we split up to do defending sessions, it’s fun to get to work with that group,” Stekr said. “They’re all awesome and they’re all great people, as well as great soccer players.”

Peterson was in the starting lineup on Sept. 14 against Illinois, but she was replaced by Stekr 16 seconds into the match.

Peterson said Stekr did well while she was out of the lineup.

“Coming in as a freshman and having new coaches and new players that you’re playing with can be stressful,” Peterson said. “You take that opportunity to battle as hard as you can, and compete for that spot. She’s done a good job of taking advantage of that opportunity.”

Peterson returned to the starting lineup for good on Sept. 20 against Michigan State. That meant Stekr had to come out of the lineup, since Windingstad, Albrecht and Kuehn were Minnesota’s back line to begin the season. Stekr will still be used as a substitute.

Stekr said the experience of starting in her first year has been helpful.

“I’m grateful that I’ve [had a chance] to play as a freshman,” she said. “There’s never a day when people aren’t ready to give their all at practice. [Minnesota] pushes me to be better. It’s an awesome experience.”