The University's BFA senior class will perform the Arthur Miller play April 13 through 23 at the Guthrie Theater. 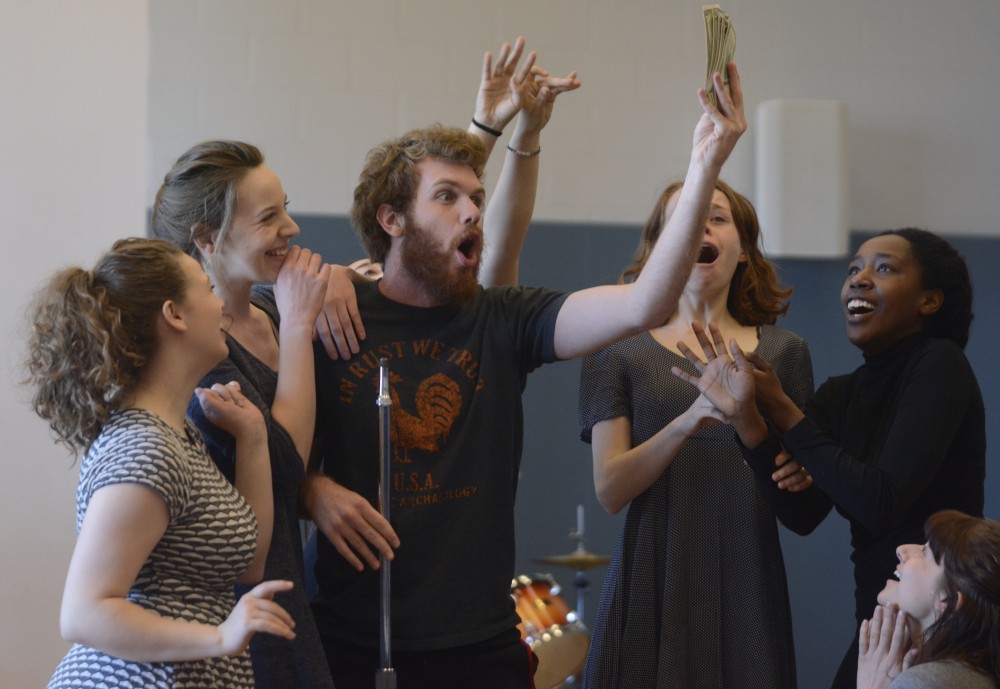 Student actors perform a rehearsal of "The American Clock" on Saturday, Apr. 1, 2017 at the Guthrie Theater.

The style of “The American Clock” differs from Arthur Miller’s more traditional plays like “All My Sons”.

The production has been described an “epic vaudeville.”

“The American Clock” features over 50 characters. Many actors take on multiple roles.

The multitude of personalities would normally prove difficult to cast, but the senior BFA acting students at the University of Minnesota have their ensemble-building techniques cemented.

“We have such a special situation because we’re a group of 21 who have been working together for the past four years,” said Olivia Wilusz, who plays Rose Baum. “We have a short hand with one another where we can really get to the meat of something we want to talk about.”

The production blends narrative, song and dance to tell the story of the Great Depression in the United States.

“The American Clock” is also a celebration of oral history. It’s based on Studs Terkel’s book, “Hard Times: An Oral History of the Great Depression.”

“I know a lot of us got our hands on the book pretty early on to start reading some of those stories and getting into the mindset of people at that time,” Wilusz said.

The actors found a link between this grand, presentational style and the emotional intensity of the Great Depression.

“Our capacity for emotion is so great, and they always say when you’re under really harsh circumstances, that capacity grows even more,” Wilusz said. “So the term [‘epic vaudeville’] shows that people don’t have to justify their behavior … in a realistic sense because the stakes are so high.”

With the play serving as a culmination of four years of training at the University and with the Guthrie Theater, the production will be a showcase for a group of young actors about to launch their careers.

“There have been so many moments where I’ve said, ‘Hey, can you try this,’ and what they do is brilliant and great,” said Joseph Price, the director of “The American Clock.” “As a group, they’re very talented. There’s real individuals in that company, and that’s really great to be around. They’re all good, strong individual people.”

The play is not a dusty, dated historical play. Proving the cliché that history repeats itself, its themes still feel relevant in 2017.

“There are things about the Depression that remind us that as a nation we’ve been through dark times in our past … but we’ve come through them, and we continue to move forward,” Price said.

What: “The American Clock”